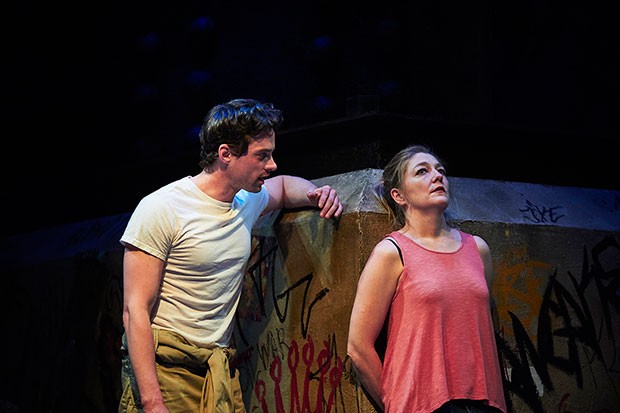 Remember Solidarność? Those heady days when a Polish labor union, abetted by a Polish pope, led to the literal collapse of the Berlin Wall and the figurative one of the Soviet Union? And what happened to those spirited Poles after? Some came to America — people like Darja, the central figure in City Theatre’s production of Ironbound.

The 2014 comedy-drama by Martyna Majok, herself a young Polish émigré, tightens around Darja at various crises in her life, always at a bus stop. She waits for many things (including the public transport to her jobs and her homes) as we meet her at age 42 (in “now”), as a newly arrived 20-year-old bride, and at various stops between and beyond.

It’s a daunting atmosphere, but Rebecca Harris dominates the play as Darja. Rarely off the stage, Harris takes us through more than 20 years of heartache and hope, marriages and domestic abuse in varying relationships with five men. Two of them never appear physically, but pervade the action nonetheless.

JD Taylor excels as Maks, Darja’s first husband, charming Polish dreamer (thank you, dialect coach Don Wadsworth) and father of her son. Erik Martin credibly portrays the quirky stranger who comes upon Darja in a mutual time of need. But the signal man in the plot is Rod Brogan as Tommy, a randy postal worker who delivers more than mail, and much grief to Darja. While not the most credible of characters, Tommy in Brogan’s hands becomes almost likable in a New Jersey kind of way.

The title refers to an industrial neighborhood in Newark, but also to Darja’s character: stubborn, resilient, maybe a little rusty around the edges; but not hard, not brittle.