“It’s a whirlwind of fun for everyone watching.” 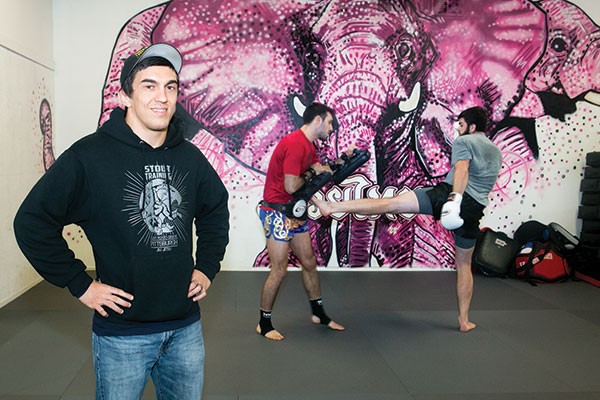 At first blush, the phrase “The Art of Eight Limbs” sounds like an old martial-arts movie starring Sonny Chiba or Bruce Lee. But it’s actually a nickname for Muay Thai, a martial-arts discipline that features using eight points of contact — hands feet, knees and elbows.

Fight trainer and promoter Andy Anderson, general manager of Stout Training Pittsburgh in the Strip District, loves the sport and is betting that others will too. He’s promoting his first Iron City Muay Thai kickboxing event at 7 p.m. Sat., Nov. 5, at the Ross Township Community Center.

“It’s been almost a decade since the last kickboxing show in Pittsburgh,” Anderson says. “While mixed martial arts [MMA] is bigger here, there is a growing Muay Thai community, and we have fighters who don’t necessarily want to fight MMA, but would love to compete in kickboxing.”

The rules of Muay Thai allow combatants to punch, kick, knee and elbow. Unlike MMA, however, there’s no cage, and combatants must remain on their feet; no “ground-and-pound.” American kickboxing has its roots in the 1970s and 1980s, and early on, fighters could only kick. In the 1990s, however, the sport started to resemble what you might see today.

“You’re going to see lots of punching, lots of kicks, and while you can’t use the elbows in amateur fighting, you can knee to the head and body,” Anderson says. “It’s fast-paced, with three two-minute rounds; it’s a whirlwind of fun for everyone watching.”

Anderson, who says he couldn’t have put the fights on without the help of Warren Stout of Stout Training, says he hopes the card is the first of many, and that it serves as a showcase for up-and-coming amateur fighters to cut their teeth in competitive fighting.

“I felt like the local Muay Thai scene was nonexistent. At best, it is hit or miss,” Anderson says. “I want to do a few shows a year. Eventually I want this to be a proving ground for local fighters, and I want to grow the sport of Muay Thai.”