Any mention of Iran in the mainstream media lately is almost certainly not positive. Usually, it's connected to how we or Israel want to bomb the Shiite out of that crazy Hitler-wannabe Ahmadinejad. Or if you look more closely, you might hear an outcry about the unfair portrayal of the civilized Persian king Xerxes as a Speedo-wearing barbarian in the movie 300.

But the younger generation of Iranians seems to look more favorably on the West, even more when the regime blocks access to MySpace and Facebook. A prime example is Sohrab Mohebbi, guitarist and singer of the Tehran-based band Sado Bisto Haft (127), which plays a style of gypsy dance-punk eerily similar to Gogol Bordello or World/Inferno Friendship Society, singing in both Farsi and English. "It's the world's second language, like [eating] hamburgers," explains Mohebbi. "I heard some lyrics on the new Gogol album about 'turning frustration into inspiration,' which is exactly what we're trying to do."

Like most things Western in Iran, 127 exists mainly on the Internet, which is also how it formed. "There was this competition for underground Iranian music on the Web. This famous setar player, Masoud Shaari, was a friend of ours and agreed to play on our song. So we thought that if he's into it, it must not be too bad! Sardar, our pianist, was taking exams so he joined later, then we needed a brass part for a song, so everything started happening." In the rare instances when 127 does its mostly illegal, clandestine gigs on the university campus ("during the previous government, the new one is too harsh"), it's a sextet with horns, drums, bass and piano.

With the burgeoning interest in gypsy/brass crossover, you'd think a band from Iran would have piqued some record-company interest, at least in Europe. According to Mohebbi, the group briefly flirted with a Scandinavian label, but it didn't pan out. So, 127's third and newest CD, Khal Punk, is available on CD Baby and as a physical album at its shows. The group did a raucous tour of the West Coast -- in some places attracting the Persian crowd, and in others the indie scene -- after a feature at Austin's SXSW festival. The band is now completing a second leg, bringing its sound to Pittsburgh on Fri., July 4, as featured performers at the Pandemic world-music night at Brillobox.

But only two of 127's members -- Mohebbi and trombonist/tombak player Salmak Khaledi -- were able to make it to the U.S., so they'll be backed up by some computer beats. "We play the original 127 songs, just changing some of the arrangements," explains Mohebbi. "Our drummer couldn't leave because of military service, and Sardar would've had to leave a $16,000 deposit and if he didn't come back by April 2, they would have taken all his money, so that seemed too risky."

"Khal," Mohebbi says, is a somewhat derogatory term for Iranian pop music, which flowed steadily homeward on cassettes from the huge Persian community in Los Angeles and now has been state-approved in Iran. "There is a legal pop scene in Iran which manages to have some performances and release CDs, but it's a closed circle. Although you're not allowed to dance, and people sit in their seats, this pop music can make you dance.

"So the question is, why are these [pop artists] legal, and we're not?"

And although the very mention of 127's music in Iran remains verboten, which thrusts the group into the midst of a politically charged atmosphere, Mohebbi offers assurance that the band is not disseminating a hippie-lefty "we're all the same" lovefest vibe.

"When we're traveling, everyone is kind to us, but I'm not trying to get on a bicycle and spread a peace message. That's irrelevant, and it's not going to stop the war," he says. "I think that the people who come to our shows already know that not everyone in Iran is a terrorist or thinks like Ahmedinejad.

"In the rock and punk and club scene, the people have more liberal political views, and they don't want to bomb Iran anyway. If I was born in the U.S., I'd be hanging around those same clubs." 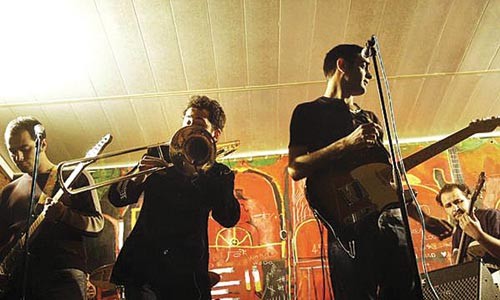