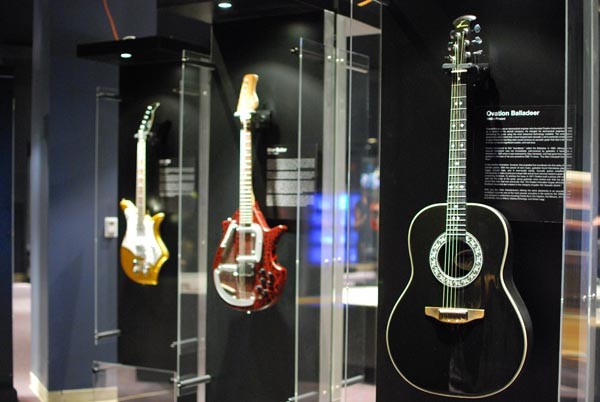 Guitars on display in the GUITAR exhibit

GUITAR: THE INSTRUMENT THAT ROCKED THE WORLD

If the Carnegie Science Center strikes you as slightly less than rock 'n' roll, then: (A) Buy a ticket to the next Led Zeppelin laser show, and (B) Check out its newest exhibit, GUITAR: The Instrument That Rocked the World.

On loan from the National Guitar Museum, it features 60 guitars, plus interactive displays, videos and the world's largest playable guitar, a 43.5-foot-long, 16-foot-wide Flying V. Guitarist Dave Wheeler — of the local, heavy, '70s-blues-riff-zillas Carousel — joined me for an early look.

In its full expression, the exhibit follows the development of the instrument from ancient times, but those early examples weren't yet displayed in their individual glass cases. We started out in the 1960s, with models like the small, paddle-shaped Phantom, and the Silvertone Amp In Case, a beginner-friendly Sears-catalog favorite.

This ain't no Rock 'n' Roll Hall of Fame exhibit, though. While you will see Johnny Winter's well-worn Gibson Firebird (which Wheeler would take home if he could: "Any old Gibson is going to sound good"), the guitars — not the guitarists — are the star of this show.

Advancing chronologically, there's no shortage of flashy, unconventional, impractical and/or dated designs, including Bill and Ted's favorite, the streamlined Steinberger headless guitar. (Wheeler: "If you pick this guitar up, you just immediately start playing ‘Owner of a Lonely Heart.'") As for the futuristic Bond Electraglide, with its digitally controlled pickup switching and LED readout, Wheeler sighs, "I can't make heads or tails of this."

You can try to not make some triumphant exclamation — e.g., "Now we're talkin'!" or simply "Yeah!" — as you approach the copy of Eddie Van Halen's iconic black, red and white Frankenstrat, but it'll probably be tough.

Then there's the Ovation Breadwinner, a solid-body electric, which looks a little like it's suffering from a toothless shark bite. The model was a favorite of Humble Pie's Steve Marriott and The Cure's Robert Smith — though, as Wheeler notes, "The name is a little ironic. Guitarists aren't generally breadwinners."