Rob Marshall's film adaptation of the 1987 Broadway musical is suitable entertainment, if you'll let it be 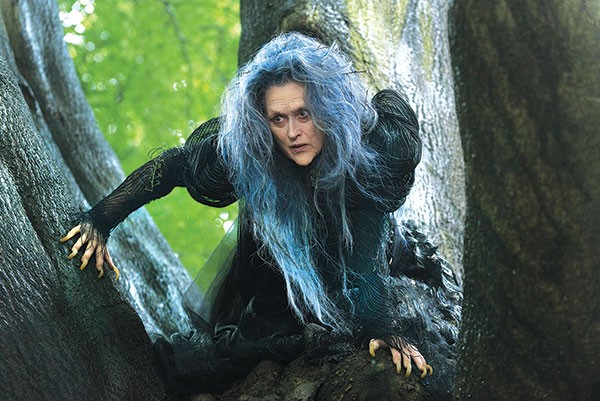 Stephen Sondheim and James Lapine's stage musical Into the Woods — a mash-up of Red Riding Hood, Cinderella, Jack (and his beanstalk), Rapunzel, et al. — takes its cues more from William Blake than from Wilhelm Grimm. Act I is Songs of Innocence — into the woods they go, where they delight in some tantalizing new adventures. Act II is Songs of Experience, where they learn that actions have consequences, and that knowledge is a dangerous thing.

As directed by Rob Marshall (Chicago), and performed with vigor by Meryl Streep (as the witch), James Corden, Christine Baranski, Chris Pine (as a prince "raised to be charming, not sincere") and others, the new film version is playful and agreeable, if a bit long in the tooth (oh, and Johnny Depp as the wolf). It assumes our awareness of genre, and so largely eschews the impulse to go meta. (Best number: Prince C. and his brother compete in song to be the more lovesick). Marshall ably makes his actors focus on the story's touching tales of familial love, romantic longing, parental error and the immutable sadness of real life (a Sondheim standard). But the play triple-underlines all of its themes, and it certainly felt fresher when it arrived on Broadway in 1987. As a film in 2014, it's suitable entertainment, if you'll let it be. Starts Thu., Dec. 25.