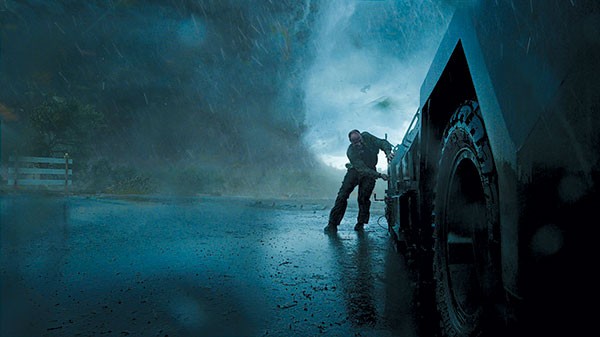 On the Fujita scale, Steven Quale's tornado-centric Into the Storm rates well above F5. There are multiple tornadoes, tornadoes within tornadoes, a tornado of fire and a super-mega-tornado with winds above 300 mph. You're gonna get your tornado-dollar's worth, at least in terms of swirling wind.

Now as for plot and quality acting? Well, a giant tornado comes to town and somebody screams, "Oh shit, it's headed for the school!" What more do you need?

You could use some weather experts to provide the overwrought meteorological data, and to balance the overwrought melodrama of a single dad searching for his son in a dangerous storm. Check and check. And if those weatherpeople are also tornado-hunters with a tank car named Titus and oodles of cameras to give us "realistic" footage, that's even better.

Caught in this very serious wind event are loads of TV actors: Walking Dead's Sarah Wayne Callies, Veep's Matt Walsh, Max Deacon from Hatfields & McCoys, and U.K. TV star Richard Armitage. And lest you think there are no laughs to be found in a natural disaster, Into the Storm also gives us Kyle Davis and Jon Reep as aspiring YouTube stars: They represent as "Twister Hunterz" and view getting swept up in a tornado as a pretty awesome good time.

There's a throwaway line about how storms are getting bigger (hey Katrina! Sandy!) but Quale isn't interested in getting political about climate change. He also drops the ball on the eco-angle of having two teens trapped at an abandoned paper mill with its — hint, hint — barrels of toxic chemicals lying around. What kind of disaster movie doesn't double down on a tornado of dioxin?

That said, the 1s and 0s line up well for some spectacular weather effects, and the vicarious destruction is pretty good (or bad, if you prefer) with plenty of airborne debris: cars, trees, airplanes and a fiberglass cow (hi, Twister!).

Quale also directed Final Destination 5, so yeah, he knows a little something about the inevitability of death. So it's a bit baffling that— spoiler alert — only two people lose their lives, despite this being the Biggest Tornado Ever. Viewers who prefer likely factual outcomes over hoped-for divine providence may be annoyed.

The screening audience, however, expressed satisfaction with the low death count — this is a feel-good tornado, after all. But, confidential to those confused by hard science: Escaping from the top of a tornado is nothing to cheer about.