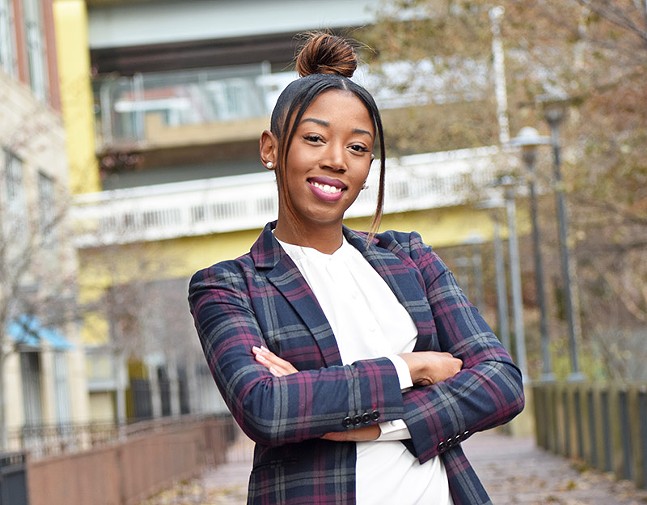 Photo: Shantale Davis
Pittsburgh Post-Gazette reporter Alexis Johnson
By Fri., June 5, Alexis Johnson was quickly becoming a bit of a household name. Johnson, a Black journalist at the Pittsburgh Post-Gazette, was removed from George Floyd protest coverage after management claimed she showed bias after she posted a viral tweet on May 31, poking fun at the mess typically made outside of Kenny Chesney concerts, and comparing that to people who were upset about property damage occurring in conjunction with recent protests. This is according to Johnson’s union the Newspaper Guild of Pittsburgh, which represents about 140 journalists at the Post-Gazette.

In response to her removal from protest coverage, guild members started a Twitter protest where members reposted her original viral tweet word-for-word along with the hashtag #IStandWithAlexis. Soon after, thousands of other Twitter users joined, and eventually the hashtag was trending in Pennsylvania. That led to a national story in the Associated Press.

Now, Johnson is speaking at length about the last few days.

“I just want to say thank you to everybody,” says Johnson, adding that she has been overwhelmed with the support she has received. “It is sad that it came to this. But, it only reassures me that I am on the right side of it. When so many people are talking about me, it is kind of like imposter syndrome. But with so many people outraged about this, it really confirms how important it is to cover race relations.”

Johnson says the support she has received is a perfect example of how to be a Black ally. She says Black journalists can have an internal battle on how to cover topics dealing explicitly with Black issues and race relations, worrying about speaking from experiences of being Black versus trying to maintain old-fashioned objectivity journalistic standards.

“Oftentimes, Black people don't feel seen or heard,” says Johnson. “But I feel the Post-Gazette news guild is the perfect example of what allies should look like."

Some guild members who posted in solidarity with Johnson had their stories related to protests and police brutality pulled from the P-G website. Those stories were replaced with new articles that reporters say they didn’t write. The guild has alleged this action by management is retaliation against reporters who participated in the Twitter protest in solidarity with Johnson.

For Johnson, this defense from her co-workers means a lot. “People stood by me and it looks like they are being retaliated against. I am so grateful,” she says. Moving forward, she says she is going to give colleagues like photographer Michael Santiago, and reporters Ashley Murray and Lauren Lee, the same support they have given her. Santiago, who is Black, said yesterday that he was also pulled off of protest coverage.

The Newspaper Guild of Pittsburgh is demanding management reinstate Johnson and Santiago to protest coverage.

Johnson is also dismayed that her employer ever questioned her credibility.

“For my credibility to be called into question because of the tweet was very disheartening,” says Johnson. “Black people have been covering these stories for centuries, for decades. We have felt the trauma, but we are still going to work, and we have been able to do that job accurately and fairly.”

Johnson grew up in Penn Hills, and lives there currently. She lived in Philadelphia while earning her masters degree from Temple University. She moved back to Pittsburgh in October 2018, when she started working at the P-G. Her current work is focused on handling P-G social media, on the morning schedule.

Her personal experiences also help her understand the protests over police brutality in multiple ways, she says. In addition to having personal experience as a Black journalist, her father was also a state trooper and is now retired. Johnson says that most of her family has experience working in law enforcement.

She says this experience has her question the “cardinal rule of objectivity” in journalism. “I think it is kinda time to reassess to those rules,” she says.

Johnson notes that after the Tree of Life shooting, many local journalists, including P-G staff, were very vocal about the dangers of white supremacy and how it must be called out. She says that she doesn’t believe journalists would be called out for saying such a thing. Johnson says this is an example that journalists can, and should, reject the standard rules about objectivity in journalism sometimes.

Johnson says she hasn’t heard from management since her story has gone viral. Moving forward, Johnson is just going to continue doing her job, even if management doesn’t reinstate her to protest coverage.

“I feel like this is bigger than me, and I am in it and let’s see what God has planned,” she says. “I have to show up and not be considered insubordinate, and keep showing up is what I am going to do.”