Chevalier's "sampling" of abstract art is an homage with a twist 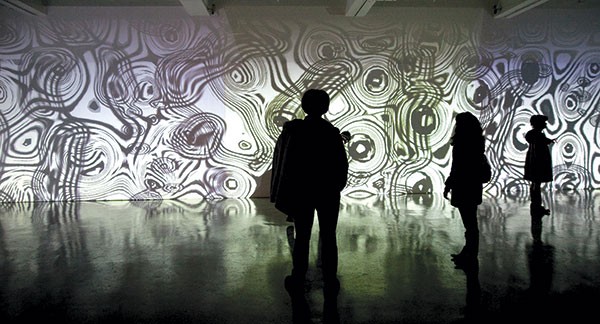 Photo courtesy of Joey Kennedy
Neither nostalgically retro nor naively futuristic: a view of Miguel Chevalier's installation "The Origin of the World"

Miguel Chevalier is a major technological artist and recognized pioneer of digital art. Chevalier has created dozens of projects variously incorporating video projections, virtual reality, holographic imagery and other forms, as his technical skills and his artistic reach are both broad. The 53-year-old artist was born in Mexico City but for more than 25 years has lived in Paris, producing exhibitions and installations for galleries, museums and public spaces around the world.

Chevalier's works of recent years are often interactive and/or self-generative within the parameters set by computer programs developed by the artist. He previously exhibited at Wood Street Galleries in 2006 — projections of a landscape in "RGB Land" and flowers growing in "Ultra-Nature," if that rings a bell. In his new exhibit at Wood Street, Chevalier draws from the tradition of abstract art without exactly perpetuating it, revitalizing that imagery in the process of developing contemporary forms of digital art. There is an implication that shapes on canvas were more compelling, say, half a century ago, but I think Chevalier's "sampling" of abstract art is indeed an homage with a twist, namely the recognition that audiences today respond to a more active engagement with art.

As with much art at Wood Street Galleries, Chevalier's new projects aren't static. They respond to the audience's movements, and we learn how to interact with them by seeing how our movements affect the artwork. The imagery in "Pixel Waves" (2013) has the utopian feel of information unencumbered by physical presence: what H.A.L. might have dreamt in 2001: A Space Odyssey. The projection fills the wall with a pattern of mostly brightly colored, simple shapes, some clearly inspired by the golden age of abstraction. (The work was first envisioned as a tribute to painter Auguste Hebin, and incorporates his motifs.) Meanwhile, other patterns suggest computer graphics or video games. The patterns change regularly, and each cycles through some progression of colors and shapes along with an enlivening wave-like motion.

"Pixel Waves" is accompanied by a techno soundtrack by Jacobo Baboni Schilingi, and the sustained and swelling tonalities and synthesized rhythms cue an association with cyberspace. As you approach the wall of projected imagery, motion-detectors pick up your movements, and the nearby visual elements are disrupted or altered. The more people are present and moving, the more the work comes alive. That's welcome, because the visuals are fairly simple and in order to hold our interest, the piece arguably requires the disruptions set in play by the audience's interaction.

The other major work in this exhibit, "The Origin of the World" (2013), combines biomorphic elements and geometric patterns along with another electronica soundtrack by Schilingi. "The Origin of the World" undergoes more of a continuous progression than "Power Pixels," and the interactivity is subtler. The patterns, which are already always in motion — picture an animation of cell division or abstracted rippling water — respond to one's presence less dramatically. The imagery is vaguely mid-century modern, but it feels neither nostalgically retro nor naively futuristic. Though it's projected imagery, it feels more like a space that we enter into, perhaps because it wraps around two inside corners. It's a visually stylized environment in which we are invited to immerse ourselves, a diverting experience that's more perceptual than intellectual.

The mood's somewhat different in the non-interactive, monitor-bound "Meta-Cities" (2013), in which we relentlessly zoom through a space filled with featureless stacked cubes and cylinders along with armatures of blue light suggesting boundaries and coming-soon construction. It's an idealized vision of cities, holding possibilities as infinite as the mathematically generated layers of a fractal. It's entrancing, but I'm just not sure where people fit in.

Chevalier has been awarded a number of architecturally-based commissions — his installations are adaptable to wildly different sites. His success with such commissions makes sense because his projections fill big walls indoors and out, animate the space and activate the audience. I mildly regret that the two major pieces in this exhibit are projected onto essentially flat walls: Chevalier's projections benefit from the fragmentation of spaces interrupted by columns, doorways, passages and corners. Those are places where the projections are complicated by the architecture, much as the patterns benefit from being disturbed by interactive human presence. If anything would make Downtown's First Night Pittsburgh festival even better, turning Chevalier loose in and around Katz Plaza could do it.