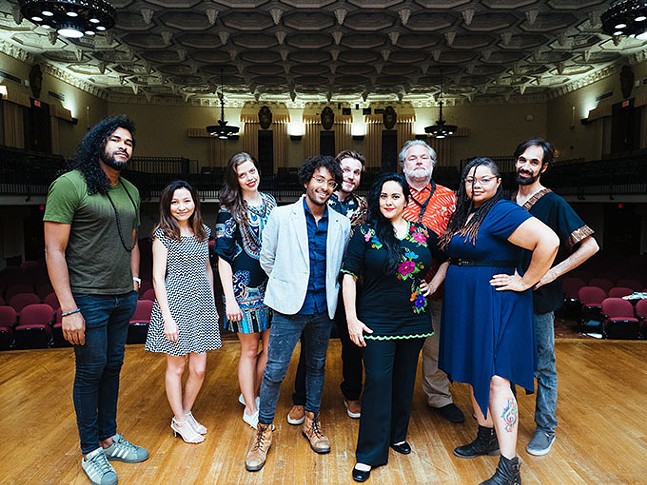 What first began as a multicultural jazz, dance, and theater performance for New Hazlett Theater’s Community Supported Art (CSA) Performance Series is now being released as Mirror Butterfly, an album with an accompanying release party on Fri., Aug. 2 at Thunderbird Café and Music Hall.

The original performance and Mirror Butterfly are loosely inspired by Chiapas, Mexico’s revolutionary Zapatista myth of relating to local ecology, sustainability, and rebellion. The piece was created in collaboration with librettist Ruth Margraff and choreographer Peggy Choy.

“[The CSA] program gives you a chance to expand beyond normal gimmicks or disciplinary boundaries,” says Ben Barson, a member of Afro Yaqui and the composer of Mirror Butterfly. “We wanted to do a mixed-media piece. We’ve traditionally been a jazz-funk, fusion band with hip hop, opera, and Eastern instrumentation. We wanted to do stage work that reflected our vision and values and put in dialogue with different folks from around the world.”

After completing the project, Afro Yaqui received feedback from the CSA program that the music in Mirror Butterfly was strong enough to function as a standalone piece. Not long after the debut, the members of Afro Yaqui found themselves performing Mirror Butterfly at the Kennedy Center for the Performing Arts in Washington, D.C.

“We had no idea going into the project that we’d get to do it again so soon at one of the biggest national theaters,” says Kelsey Robinson, one of the group’s lead vocalists. “There’s been a bunch of little steps and celebrations along the way. It gathers a little bit more steam every step of the way.”

Along with the Kennedy Center, Mirror Butterfly has been presented both nationally and internationally in venues such as the Lincoln Center, the Red Rooster in Harlem, the Free Library of Philadelphia, the Vibrato Jazz Club in Los Angeles, the Mesopotamian Water Forum in Iraq, as well as universities around the Americas from Pittsburgh to Vermont, to Mexico and Cuba.

“What we created is mutually intelligible across thousands of miles,” says Barson. “We’re hoping the CD will have that kind of resonance in social-movement spaces. The CD is a tool to create awareness and engagement with environmental activists across the world.”

Mirror Butterfly was inspired by interviews conducted with activists and artists and focuses on three women, as described on the collective’s website: “Mama C, a former Black Panther now in Tanzania, symbolized by the Mulberry Tree; Azize Aslan, part of the Kurdish woman’s movement, fighting ISIS and Turkish repression, symbolized by the Stoneflower; and Yaqui women Reyna Lourdes Anguamea and Gizelxanath Rodriguez, both represented by the almost-extinct Kautesamai Butterfly of Sonora, Mexico.”

Throughout the piece, viewers follow the women’s confrontation and engagement with violent, repressive colonial occupation (symbolized by the Sword character), whose destruction of ecosystems results in forced migration and climate crisis.

“One of the things that [Mirror Butterfly] does is touch on where all of these things meet,” says Robinson. “Where a need for prison reform or ending white supremacy or the refugee crisis, all of these things are coming from this root of capital greed. And that’s what telling the story through these specific women’s words does, as well as the folk tale.
“[Mirror Butterfly] allows you to illustrate that these are tropes, are themes that are cyclical, and they’ll keep happening over and over again unless we really return to the land, unless we really give power to women and come together to fight in these ways,” she says. “And that’s how we defeat the sword. It’s these three women. All three of them couldn’t do it individually. You needed the three of them to come together.”

Robinson says Mirror Butterfly can also relate to the city of Pittsburgh, citing the rapid gentrification in East Liberty and alleged ICE arrests throughout the city, people being forced from their homes and towns. The problems found here are similar to those all over the world. “Looking at those points of intersections of where the problems overlap is how we fight them in a way that stays.”

While the purpose of Afro Yaqui’s upcoming show at Thunderbird is to promote the CD release, Barson says the show will be a hybrid of new and old. The beginning of the night will start with a smaller, nine-piece version of the group performing songs fans have come to know over the years. For the second half of the night, the larger portion of Afro Yaqui will take the stage with a choir and an expanded string section.

“We’re not going to scale back,” says Barson, “but we’re going to fuse what we do as a smaller ensemble for the first part, and the second part we’ll let it evolve into this crazy incredible organism.”

Because much of the work was derived from activists and people in Tanzania, 100 percent of the album’s sales will go to Namakasia Radio, the medium of communication of Yaqui River defense in the town of Vicam, in the territory of the Yaqui Tribe, based in Sonora, Mexico.

“When people come to the show and buy the CD, they’re participating in this exchange across the world,” says Barson.