International Puppet Festival brings together artists from around the world 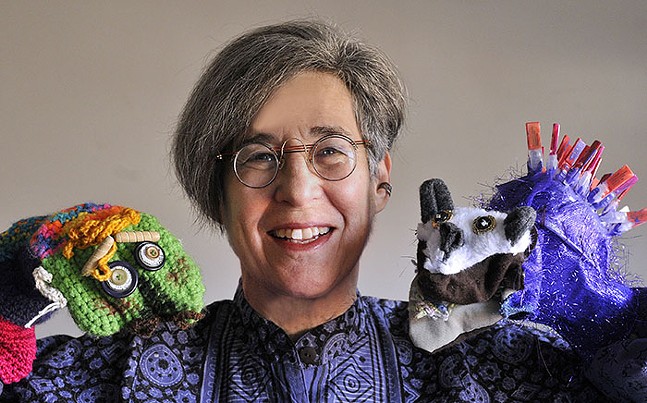 Photo: Larry Roberts
International Puppet Festival participant, Sherri Roberts
Live events have a kind of excitement that, no matter how hard they try, virtual events can't replicate. But connecting virtually also offers things that in-person events never can, like bringing together puppeteers from several countries for a workshop and theater festival. Tom Sarver, who began his Virtual Puppet Residency earlier in the pandemic, will show off some of the art his group has worked on together during the International Puppet Festival on Sat., Dec. 12.

Sarver, a Pittsburgh artist who has worked with puppets for decades, had several teaching and artist-residency jobs canceled at the onset of the pandemic. So, he decided to put together a call for people to participate in an online puppet residency. At the end of the first residency, participants from around the country, and a few outside it, showed off the projects they'd been working on during a puppet slam.

Now, as the second iteration of the residency wraps up, participants will show off work during a more robust International Puppet Festival, where audiences can view the works on Zoom or on Facebook Live. Sarver compares the feeling to that of the Black Sheep Puppet Festival, a locally run event that lasted a decade, and in which Sarver participated.

"With this event, the excitement is there, kind of like what I had with the Black Sheep Festival and other events over the years," he says. "It's just a little different."

When Sarver put out a call for the second round of the residency in the fall, word spread much farther than the first time, with participants from all skill levels and varying puppet disciplines (marionettes, shadow puppets, stop-motion) logging on from around the world, with puppeteers from Kenya, Romania, Greece, Canada, South Africa, India, and other countries, as well as artists local to Pittsburgh.

Even though the workshoppers ranged from amateurs curious about the medium to experienced, professional puppeteers, Sarver says the novel experience of it being online "leveled the playing field" for everyone.

"I was just amazed at how well this idea worked," says Sarver. "Everybody's kind of starting from scratch and trying to figure out how to present, how to make something that's interesting to show online."

The International Puppet Festival is broken up into three categories and times based on content: the children's show, the all-ages show, and the adult show. Each group will feature a combination of live and pre-recorded short puppet pieces. Local puppeteers include Sherri Roberts, a fiber artist testing out her material on a new medium for a children's show, and Catherine Welsh Aceto, who has recreated a scene from The Tempest with puppets made out of plastic bags.

Aside from bringing together artists and ideas from around the world, the residency also gave everyone involved a window into how parts of the world have been experiencing the pandemic.

Fedelis Kyalo, a professional puppeteer from Kenya, created a piece called "Lockdown in the Village," about how his region has dealt with the virus. Rachel Sutherland, another participant from Ontario, Canada, created a piece about not being able to visit her grandma in a nursing home.

Sarver says that participants have told him the workshop has been a bright spot among all the difficulties of their year. Even though he wants to get back to live events when the pandemic is over, Sarver says, "For me it's been this really wonderful thing that's developed where I'm suddenly communicating with people around the world and I'm learning as I'm teaching this.

"I think there will always be a place, pandemic or not,” he adds, “in just getting to know people from different places, getting to meet a whole new group of puppeteers from around the world."