Locally-submitted stories from sex workers will be performed by actors at Persad Center on Dec. 17 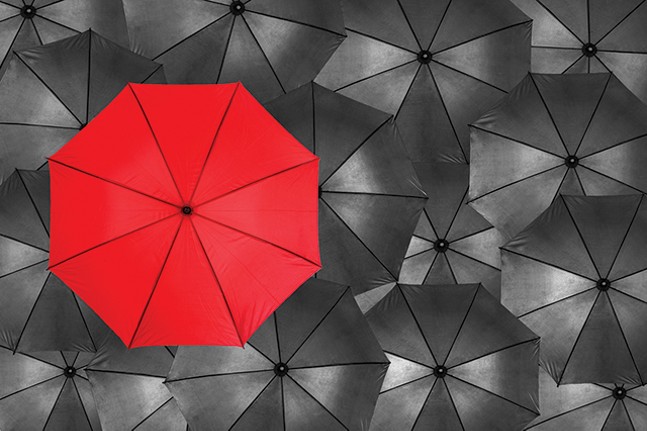 The red umbrella is a symbol reflecting the protection of those in the sex work industry.

This year saw a number of high-profile stories about sex work, and while there's substantial progress yet to be made, the industry has never been such a big part of mainstream cultural conversation. There was the passage of anti-sex trafficking bills FOSTA and SESTA (which many sex workers argue is censorship and detrimental to their business), the recent "adult content ban" on Tumblr, and a general amplification of statistics about violence against sex workers (particularly trans and people of color).

It's fitting then, that 2018 will close out with the 15th annual International Day to End Violence Against Sex Workers on Dec. 17.

Pittsburghers can observe at Persad Center, with a potluck and night of storytelling from people in the industry. If you're interested in submitting, you can find the form through Sex Workers of Pittsburgh's (SWOP) Facebook page. Stories will be told anonymously unless otherwise noted.

City Paper spoke with a stripper and entertainer that goes by Iris about what the day means to her. The interview has been lightly edited for length and clarity.

The inaugural International Day to End Violence Against Sex Workers was in 2003. When did you first become aware of it? When/how did you first get involved?

I first started working as a dancer in New Orleans and working in the French Quarter was a very eye-opening experience for me. I was followed home from work, I would wake up in the morning and people would be waiting for me outside my house. Fellow dancers were jumped leaving work at night headed back to their cars. Wearing sweatpants, leaving at 4:30 a.m. with a backpack (hopefully full of cash) and a face-full of makeup, us dancers are obvious to someone who knows what they're trying to find. I will say the community in New Orleans is very hands-on, and there were so so many people who understood the risk all sex workers faced. There certainly were people who would show up with baseball bats if you called saying you were in trouble. I don't have much commentary in that regards for Pittsburgh.

A friend I worked with passed away in 2017 from being stabbed to death, and that was when the threat of this specific industry became direct and personal. I began working with SWOP Pittsburgh this year and we have been working on providing financial, legal, and health resources to the local area. The specifics of trying to target how to minimize the violence against sex workers feels like a wild-ass untamed animal, but the good news is that these topics are now challenging and reshaping legal policies (or the lack thereof).

What drew you to work in this industry? When did you first recognize it as a possible career?

I was drawn to work in this industry because I have a background in business management and waking up at 7 a.m. to work with ungrateful men while having to fight and fight to be paid properly was stupid, frankly. Also, I have experienced workplace sexual harassment. So waking up whenever I wanted and working whenever I wanted while making the head of operations meet me at MY workplace sounded theoretically better. Dancing became my sole source of income in August of 2015 and has been since. I knew immediately it could be a career, especially on Bourbon Street (at the time).

What was your response to the recent "adult content" ban on Tumblr?

Was there a particular story/piece of advice that you were told earlier in your career that encouraged you to pursue this work?

I have always felt connected to sex work! I was what, nine years old when the cover of the song "Lady Marmalade" came out? "We independent women, some mistake us for whores / I tell 'em 'Why spend mine, when I can spend yours?'" Yeah yeah, sexualizing the youth is bad but I also felt an innate closeness with the suggestion of sexual healing. I still feel a very strong connection to the notion of providing calmness and comfort through the dreamy dim-lit setting of boundaries, face caressing, and sometimes champagne.

The direct advice I received was when I was complaining about my business background and having to interact with shitty men who sexualized me anyways, and a friend of mine who was dancing encouraged me to do the same and become self-employed.

I am optimistic about the uprising of advocacy. It is really wonderful to see people taking back their autonomy, as well as standing by one another and for the rights of not only themselves but for their fellow sex work family. It is also great to see the acceptance of sex work socially, seeing as how there are so many successful individuals who could use the mutual exchange of goods and services sex work provides to rid them of loneliness or boredom.

Sex work can feed your children and pay off your medical costs but being the objectified medium between someone and their drunk self-digressions runs the potential of high, high risk. Not only of personal safety, but also that of authentic character.