Ike Taylor plays crucial role in Steelers defense — even if it's not always clear in the highlight reels. 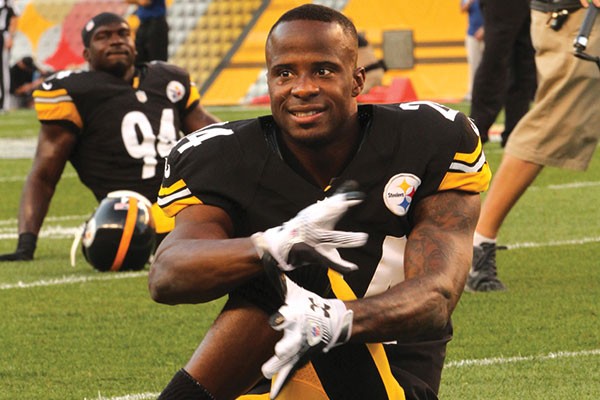 When football experts talk about the NFL's best shutdown cornerbacks, one name always seems to top their list: Ike Taylor.

Wait. Actually, it doesn't. In fact, there is a whole catalog of names that get spoken before Taylor's: Darrelle Revis, Richard Sherman, Peanut Tillman and an aging Champ Bailey, just to name a few.

Taylor himself can tell you the main reason why his name isn't on that list: "Interceptions, that is it," he says. But that doesn't mean he agrees with the rankings.

Since entering the league in 2003 out the University of Louisiana-Lafayette, Taylor has just 14 interceptions and one touchdown. Compare that to his former college teammate, Chicago Bears corner Tillman, who has racked up 33 picks and eight scores, after entering the NFL the same year as Taylor. Then again, the Bears haven't won a Super Bowl since Tillman went pro.

"I've been here for 11 years," Taylor says. "Everybody has their own opinions of me and I respect that, but I have to let that stuff go in one ear and right out the other."

For his part, head coach Mike Tomlin has downplayed the emphasis on interception statistics.

"I really think when it comes to interceptions it's not about the number you get. It's about what you do with the opportunities that you get," Tomlin said during a press conference before the Steelers second pre-season game. "I think measuring defensive backs or units solely on interception numbers is somewhat inaccurate."

Taylor's career has certainly been full of ups and downs. But while his contributions to the team are sometimes minimized, his blunders have been emphasized plenty.

While the 2011-12 season was generally considered one of Taylor's best, for example, the only part of it many fans recall was the overtime of the AFC wildcard playoffs, when Taylor was scorched by a short pass over the middle from Denver quarterback Tim Tebow to wide receiver Demaryius Thomas. That play went 80 yards for the winning score. In November 2006, Taylor was benched by then-head coach Bill Cowher before regaining the job the following month due to injuries in the secondary.

Still, Taylor has been one consistent presence in a defense that, under defensive coordinator Dick LeBeau, has consistently set the league standard year after year. Taylor must be doing something right.

Last season, when the Steelers went 8-8, Taylor was criticized for again posting lackluster interception numbers and for getting beat on a couple of big plays. However, the Steelers finished 2012 as not just the top team in terms of overall defense, but No. 1 in pass defense.

"We're number one. What else do we have to do, get to number zero?" Taylor asks. "I guess we can try that."

Answering critics like that and playing with a chip on his shoulder has no doubt been among the biggest reasons Taylor has survived so long with the Steelers. He seems to have an uncanny ability to bounce back from adversity: Even if others doubt his talent, he never seems to. He's well aware that since he was drafted in 2003, the Steelers have drafted no fewer than 13 defensive backs and signed another 18 as free agents.

"I'm going to keep counting, too," Taylor says. "It looks easy and everybody feels like they can do it, but this is not for everybody."