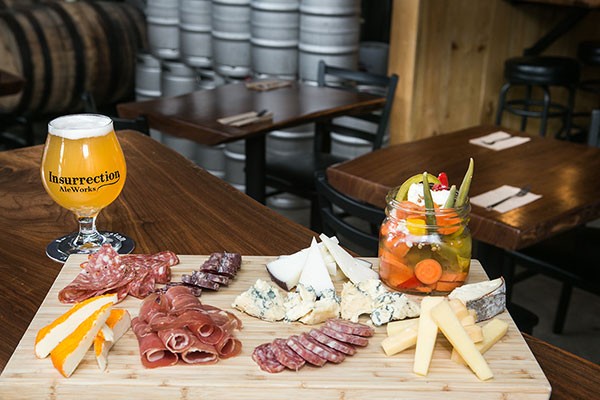 Just past the tunnel in Heidelberg, there is an unassuming brewery with a passion for patiently fine-tuning its craft. Insurrection AleWorks, co-owned by Matt Messer and brewer Brad Primozic, will celebrate its first anniversary in November. “Back in January we ran out of beer because we couldn’t make it fast enough. We’re slowly putting everything we make right back into it,” says Primozic, a chemist-turned-brewer. With a canning line and 15-barrel brewhouse in the works, and the support of the customers, Primozic is dedicated to producing great beers, with a focus on sour beers. “I got really lucky. I was living on the New York-Vermont border for the last 10 years, and the number-one brewery at the time, Hill Farmstead, wasn’t too far away from me. I was drinking a lot of their beers and they were doing sour beers then. I wanted that closer to home,” he says. 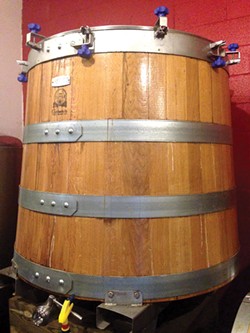 Insurrection’s sour-beer program involves a 1,000-liter oak foudre, a large cask typically used by winemakers; three 130-gallon stainless-steel fermenting tanks; and six oak wine barrels. Avoiding cross-contamination by yeast between the sour beers and the other beers is important for maintaining control over flavor, so Primozic has a completely separate set of equipment, all marked with red tape, for brewing a sour. The room that houses the tanks is kept at negative air pressure so any yeast that escapes is sucked onto the roof. If he wants to work with the other beers after the sours, he goes home, showers and changes his clothes.

Primozic’s “quick-turnaround” sour beers take from four to six months to be ready. He’s a strong opponent of kettle-souring, a process in which bacteria — usually lactobacillus, which produces lactic acid — is added to the wort before boiling. After sitting until the desired PH is attained, the wort is then pasteurized, preserving the sour flavor but killing the remaining bacteria used to create it.


“If you use the kettle-sour method, the beer won’t get any better than the day you bottled it. Everything’s dead,” says Primozic, “If you use my preferred method, you boil the beer off, add the lactobacillus first and then, once it’s at the desired PH, you add brettanomyces — wild yeast — and ferment it.” That bacteria metabolizes sugar slowly, which means the entire process from brew to beer takes longer — up to two years. “We’re very passionate about it. Patience is key,” says Primozic.

Insurrection AleWorks sells its beer only in-house (although sometimes a case ends up down at the Carson Street Deli). The food menu is as carefully considered as the beer. Primozic, who spoke wistfully of Vermont, highlights one of that state’s specialties — cheese — in an impressive and rotating cheese and charcuterie menu. The drive to Heidelberg is well worth it to sip Pink Yoga Pants; this gose beer with Himalayan salt, coriander and hibiscus is named affectionately for Primozic’s girlfriend.