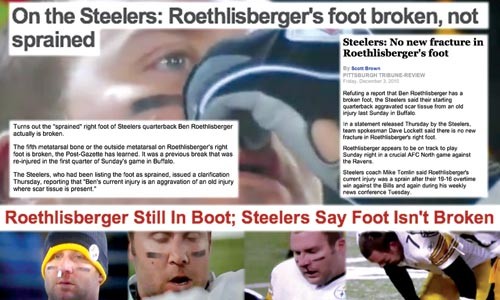 During the first quarter of the Steelers' Nov. 28 game in Buffalo, quarterback Ben Roethlisberger injured his foot. But he finished the game with 246 yards passing, and afterward, reporters were told Roethlisberger merely had a sprained foot -- but one that would be fitted with a walking boot.

For several days, the injury was reported as a sprain. But on Dec. 2, Ed Bouchette, the Pittsburgh Post-Gazette's long-time Steelers beat reporter, reported that "the 'sprained' right foot of Steelers quarterback Ben Roethlisberger actually is broken. ... It was a previous break that was re-injured."

That news cast doubt on whether Roethlisberger would suit up for a crucial Dec. 5 game against the Baltimore Ravens. But the following day the Steelers issued a brief statement that cast doubt, sort of, on Bouchette's account:

"In response to inquiries about Ben Roethlisberger having a broken foot, Steelers spokesperson Dave Lockett said there is no new fracture in Ben's foot. Ben's current injury is an aggravation of an old injury where scar tissue is present."

That was all that other local media outlets needed to hear.

The Tribune-Review trumpeted that the Steelers were "[r]efuting a report that Ben Roethlisberger has a broken foot," and claiming that the quarterback had merely "aggravated scar tissue from an old injury." After the Ravens game, the paper referred to the foot as "sprained."

Bouchette, who notes that Roethlisberger's shoe is specially equipped with metal plates to protect the injury, is standing by his report.

"I thought that was a strange piece of info the Steelers put out," says Bouchette, via e-mail. "First, they referred to it as a sprain and then when I reported it broken, it seemed as though they tried to play semantics for what reason I do not know. If it's aggravation of an old injury, it's never been this bad where he's had to have a special shoe with metal plates ... [I]t is broken."

Outside Pittsburgh, media accounts seemed more likely to follow Bouchette's lead. The New York Times described Roethlisberger as "hobbling on a broken foot," while NFL.com recounted that in the Ravens game Roethlisberger's nose "had been pushed sideways as he hobbled on a broken right foot."

"Do the Steelers want to control the information being released to the public? Of course they do," says Robert Bellamy, a journalism professor at Duquesne University. For one thing, injury reports risk revealing potential weaknesses to next week's opponent.

Whether Roethlisberger's foot is broken or merely an "aggravation of an old injury" may seem a minor distinction. But the Steelers have also offered diagnoses that require fans to ignore the evidence they see with their own eyes.

During the Nov. 28 Steelers game against the New England Patriots, receiver Hines Ward took a helmet-to-helmet shot from Patriots defensive back James Sanders. Ward went to the ground, and as he was being walked off the field by trainers, he clearly stumbled and looked dazed.

The report from the Steelers? During the game, it was that Ward had suffered a neck injury; Ward was even shown riding an exercise bicycle. After the game, however, Steelers head coach Mike Tomlin acknowledged Ward had a concussion.

"The team likely called it a neck injury at first in case they wanted to bring Ward back in the game," surmised ProFootballTalk writer Gregg Rosenthal in a post-game dispatch. According to NFL rules, once a concussion is diagnosed, the player is out of the game until he passes rigorous medical testing.

Neither the Steelers nor the NFL returned calls for comment on this story.

"Coaches are generally paranoid about [disclosing] injuries, and I don't know exactly why," says Bouchette. "If it were up to them, they would not reveal anything, but the league requires it."

John Clark, associate professor of sports management at Robert Morris University, says that while teams do try hard to protect their injury reports, the Ward case was "puzzling."

"It was fairly apparent what happened, but maybe he did tweak his neck or maybe it was just incorrectly reported," Clark says. "Then again, it may have been strategy."

All NFL teams can be creative when it comes to injury reporting, says Eric Edholm, a writer for Pro Football Weekly Magazine -- though some teams are more open than others.

"But then you've got guys like Andy Reid [of Philadelphia], who starts off every press conference talking about injuries," says Edholm. "And while I haven't done much with the Steelers, it does seem like Mike Tomlin is in the middle of the league when it comes to his willingness to talk about injuries."

Tomlin's predecessor, Bill Cowher, told USA Today in 2007 that he had "fibbed" before on injury reports. "Sometimes when a guy had an ankle [injury], I might list it as a knee," Cowher says, "just because I didn't want people knowing where to take shots at my players."

There are penalties for not reporting or inaccurately reporting injuries. But when USA Today studied the issue, it found that fines are rarely handed out. Former New York Jets coach Eric Mangini was fined $125,000 in 2009 for not reporting that quarterback Brett Favre had a torn biceps tendon. But that was an exceptional case: Fines typically run between $5,000 and $25,000, the paper reported, and the most recent previous fine of more than $25,000 was handed out in 1999.

How likely are local reporters to challenge the team's claims?

One clue may come from a cover story Sports Illustrated ran in May about Roethlisberger's fall from grace in light of sexual-assault allegations. Among the story's accusations: that KDKA-TV had filmed Roethlisberger riding his motorcycle without a helmet and flipping off a TV camera -- shortly after Roethlisberger had sworn to wear a helmet in light of his June 2006 motorcycle crash at the foot of the 10th Street Bridge.

"Several people who saw the video gave SI similar accounts of the tape," Jack McCallum wrote. But it never aired. McCallam added that "sources believe the story was killed out of fear that it would damage KDKA's relationship with the Steelers."

KDKA management has denied that account; in any case, McCallum's story doesn't allege that the Steelers tried to pressure the station (or that the team even knew about the tape). Most observers say it's unlikely the team would take such a step.

"I know they've never tried to control anything I've written or said ... in my 26 years on the beat," says Bouchette. While "[t]here obviously are some instances where they try to influence people," he adds, "the Steelers are more fair with the media than most NFL teams, at least from what I've heard and seen from others around the NFL."

But in a town as sports-crazy as Pittsburgh, Bellamy says, media outlets might have reasons of their own for wanting to be seen as team players.

"What goes on here isn't unique to Pittsburgh, but the Steelers do have quite a hold on this region, more so than any other entity," Bellamy says. In larger, less-cozy media markets like New York or Chicago, he says, reporters are more aggressive. But "the Steelers have been the gods of Pittsburgh for 40 years." As a result, "[They] are able to set the terms of the message, and some media reports it as-is."

So when it comes to reporting on injuries, it may be no surprise that the Steelers have had some luck working the referees.

"Do they try and control the message that gets out? Yes," Bellamy says. "But are they doing anything different than any other corporation, university or hospital around here? I really don't think so."