Inspired by Michelangelo, an artist blends the representational and the abstract | Features | Pittsburgh | Pittsburgh City Paper

Inspired by Michelangelo, an artist blends the representational and the abstract 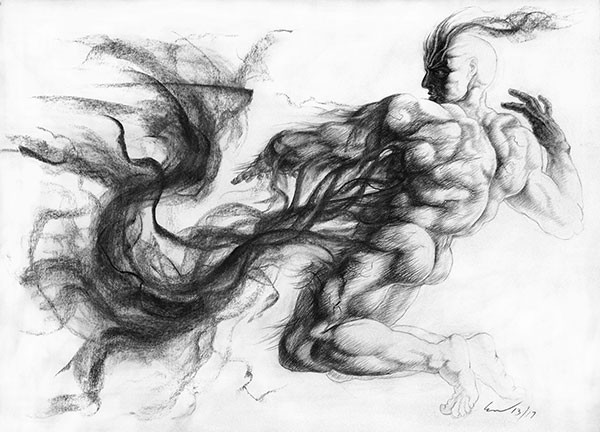 Richard Claraval is a romantic with a scientific point of view. He believes everything in the universe results from understandable causes, and yet there is something metaphysical about Ignudi, his exhibit of drawings at the Spinning Plate Gallery. The 38 works in charcoal and graphite are a synthesis of representational drawings of Michelangelo's ignudi from the Sistine Chapel and Claraval's own type of gestural abstraction.

Claraval's copies of Michelangelo form the basis of his drawings. He meticulously transferred 19 different ignudis (nude youths) to sheets of paper both large and small. Then he drew over and sometimes effaced the drawings with faster gestural lines, distributing the energy of the originals.

The drawings are somewhat experimental. In the smaller ones, Claraval drew three rectangles over parts of each ignudo, then elaborated the shading within the blocked-off areas. Finally, he connected the rectangles with a dark, bold gestural line. Claraval is not slavishly beholden to Michelangelo. Often, he varies the placing of the figures on the page, and adds or subtracts pieces according to his interpretation.

The quality of the lines is essential to the work. There are lines that writhe like snakes choking off the figure, lines that look like wisps of smoke, dusty swath-like swipes, dancing lines and hatched lines. Sometimes the lines are fine like hair; others seem to torment the bodies like vines with prickly thorns.

As in The Doors song, Claraval tries to "break on through to the other side." We witness figures battling a whirlwind of forces that threaten to extinguish them. Sometimes the subject is overcome and turned into a devil of sorts. Other times, he finds his confidence, magically controlling the "evil" gestural lines which face him.

There is nobility of vision in this art. It speaks of suffering, transformation and cosmic order. My only misgiving is that often the two styles do not unite convincingly so as to create more visual depth.

Perhaps recognizing these virtues, and their imperfections, is the best we can realize from this transcendent exhibit.