Inside the weird world of YouTube channels dedicated to reviewing toilets

It’s difficult to understand why these videos exist, what makes up a good or bad toilet, or where the users get their strong opinions 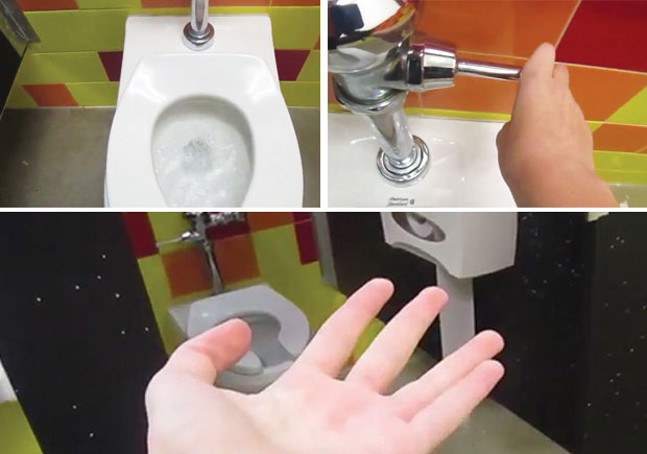 Like many of you, I’ve journeyed down many bizarre YouTube rabbit-holes in my day. Knife-making competitions. Blue Apron-sponsored ASMR. Sandra Lee compilations. Raw vegan cooking shows. Hip-hop dressage. A python eating a whole alligator. I mean it when I say I’ve seen some weird shit, but even I was truly confused when I learned about the Toilet Filming community.

There is a small but passionate community of YouTube users who post dozens, hundreds or maybe even thousands of videos of toilets flushing. It varies slightly depending on the channel, but the characteristics of the pieces are mostly the same. The videos are less than a minute long; have a low number of views; identify the make and year of the toilet; and very importantly, feature toilets that are always clean when flushed. (I watched one video in which the user announced the toilet was brown from rust, and that any commenter claiming otherwise would be blocked.)

Two of these users, VintageToiletsPittsburgh and PottiesInPittsburgh, are based locally. There might be some familiar toilets, like those in The Andy Warhol Museum, or Primanti Bros., or the JC Penney’s at Robinson Mall. To untrained eyes, these are just regular toilets. But to these users, they matter. While the videos rarely feature verbal narration, there are hand gestures — a thumbs up, thumbs down, or aggressive waving of the middle finger — to indicate the videographers’ feelings about a piece of plumbing.

To be clear, these are toilets that happen to be in Pittsburgh, but the focus is not on the “Pittsburgh Toilet,” a common fixture in older homes, which usually consists of a wall-less, standalone toilet in the basement of a house.

It’s difficult to understand why these videos exist, what makes a good or bad toilet, or where the users get their strong opinions.

For example, one of the most common — and most hated — brands is American Standard, specifically the Madera model. To me, it looks like every other toilet on earth. But to the Toilet Filming community, it’s known as a “crapdera,” as in a toilet that is a piece of crap (and is bad at flushing it). I had no idea that anyone, other than plumbers and Home Depot employees, knew the difference between toilets, let alone the specific make and year. Is there a handbook, like Leonard Maltin’s Movie Guide, but for toilets?

I’ve never been a reddit user, but it’s a good place to go when looking for answers on an obscure topic. This led me to a subreddit called DeepIntoYouTube, the rules of which include “no videos uploaded as recently as five months shall be posted” and “No viral videos or videos with more than 100,000 views at the time the link is submitted.” Even this dark forum, which has discussions on such videos as “The Big Bang Theory Laugh Track Replaced With Shitting Sounds” and “The HIGHEST heel click in the world” doesn’t fully understand toilet filming. Comments range from “The internet actually does have everything” to “[That] guy will get ebola and die the way he flushes those toilets.” (Indeed, almost every video features the director reaching in to flush the toilets with their bare hands. I can’t remember the last time I flushed a public toilet using my hands — foot all the way, baby).

There is something almost calming about the way the water swirls. The most popular video on the PottiesInPittsburgh channel is a 41-second clip of a porta potty, repeatedly spitting out blue fluid into the bowl like small waves lapping against the shore. Toilets have an objectively disgusting job, but apparently they can be mesmerizing.

There is also something creepy and unsettling about the videos. Taking a camera into the bathroom feels sinister, no matter how innocent the intentions (or how clean the bowl). Another friend I sent the videos to said the toilets “felt militant.” In college, I read a paper describing a mass hysteria that ensued among women working in a Malay factory because they were not used to using Western-style toilets, and believed bodies of water held evil spirits.

If you’re the kind of person who gets anxious at the thought of not recycling paper, then toilet-filming videos might create a similar knot in your stomach, seeing the hundreds of gallons of water used because someone wanted to flush every toilet in McDonald’s.

I prefer my toilets to remain anonymous. I never want to find myself at a rest stop in Ohio thinking, “Thank God, there’s an Eljer Sanus toilet!” But the best part about the internet’s wide cast is that literally everyone can find a niche. There is no hobby or interest on Earth for which there is not also a community of like-minded people, there to share joy or anger at your toilet.