Innervenus rolls out a new compilation of Pittsburgh metal bands

"I think this will be introducing a lot of people to some different stuff in the city." 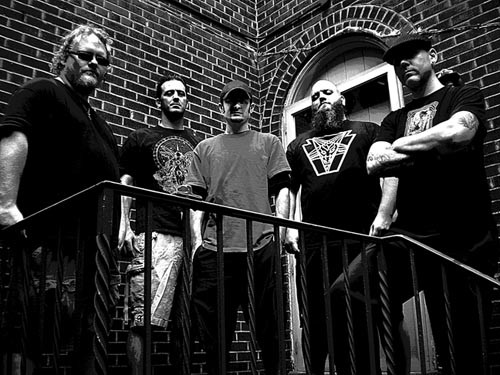 Scott Massie and his Innervenus Music Collective have released albums for 10 years now, and even dabbled in anthology, releasing 2003's Ursa Major comp. But when Massie spotted a resurgence in the local metal scene coalescing in the past year or two, he realized a metal-only collection was due.

"It just had to happen," says Massie, a soft-spoken print-shop worker by day and screamer for the band Storm King by night. "I had to make a way for other people to see what was going on here."

So he took the initiative in putting together a new compilation, Iron Atrocity Vol. 1. While the comp was quietly released weeks ago, its official release comes Sat., July 30, with a free show at the 31st Street Pub.

Massie and his wife, Kimee, founded Innervenus in the early 2000s; Massie had moved to Pittsburgh from Akron with his band, The Bully Cats, in the late '90s. Originally an art and music collective, Innervenus is now mostly a music venture, with Kimee Massie having spun her graphic-design work into a business of its own.

The rest of the collective is somewhat amorphous, but the team that worked on the comp includes Massie's Storm King bandmate Mark Bogacki, Dethlehem's Dave Warren, and Chris Woodford.

While he may have seen the label as a potential career early on, Massie says he now looks at what he does with Innervenus as just a passion -- and likes it better that way.

"I look at it as a labor of love instead of my bread and butter," he says. "Now I have a career, I have a wife, I have a kid. And I enjoy it more -- I'm putting out stuff I like, and not looking to make money."

It's a good thing, because otherwise Iron Atrocity might not have happened at all; online fundraising efforts earlier this year didn't go so great.

"I started a Kickstarter campaign; it failed," says Massie. "A few people donated anyway, but the majority of the funds came out of my pocket. It was really about making something that will last, and putting together the bands that I really wanted."

The 16 bands on the comp are all bands that Massie knows and likes. Relapse Records band Hero Destroyed, for example, kicks off the CD with its mathy abrasion; Invader provides four minutes and 20 seconds of thrashy metalcore; Vulture brings the disc to a close with a screaming, sludgy extended jam.

As a sampler of local metal, the CD is also much more focused than Ursa Major, a non-genre-specific release Massie describes as "a mess."

"We just wanted to be diverse at that time, but no one can listen to the whole thing," he says. "Even I don't listen to it all the way through. This one is all different kinds of metal, but it's all metal."

To an extent, Massie modeled the new Iron Atrocity project on the old Steel City Aggression comps that Da' Core released in the late '90s. And some of the bands on the new collection are different permutations of players whose old bands date to that period: Fist Fight in the Parking Lot, whose "Side Stepping Ninja" is one of the comp's most polished tracks, includes members of Mojo Filter and Motorpsychos. The gore-grind band Leprosy is responsible for some of the comp's biggest gross-out moments with "Postmortem Ejaculation"; it's also the longest-lasting outfit of the lot, having played together since the late '80s.

Massie plans for the Iron Atrocity franchise, like the Steel City Aggression series, to have multiple iterations.

"I said I'd officially start working on volume two in September," he says. "But I've already sat down and started planning some of it out."

The current plan is to release the first three editions six months apart; "I haven't thought ahead to number four," Massie explains.

Perhaps the best thing about the Iron Atrocity comp is that the 1,000-run CD (and digital download version) is free.

"Every time you hear someone say, ‘Man, this scene sucks,' or whatever, it'll be nice to have this to just hand them," says Massie. "If you see any of these bands [perform], they'll blow your mind."

One of the positive results of the compilation, Massie says, has simply been getting bands on different ends of the metal scene to know one another better. Mike Bolam, who's played in bands like Necrolysis and Crucial Unit, and whose band Abysme has a track on the comp, says the mix of bands is a good thing.

"There were a lot of bands on there I hadn't seen or heard," Bolam says. "I think it's a pretty good representation of what's going on right now; some of these bands have an established fan base, like Hero Destroyed, Complete Failure, Storm King -- but I think this will be introducing a lot of people to some different stuff in the city."

"Sometimes I think ‘the scene' is like ‘the man' -- this fictionalized thing. A scene is really a bunch of individuals. Getting people on the same page, getting them together -- that is the scene, I guess."