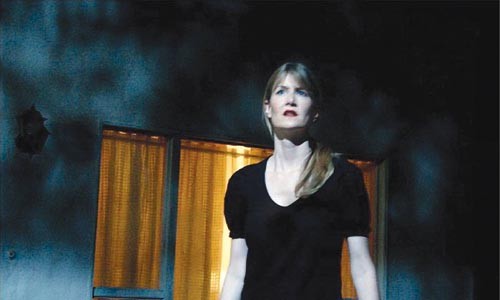 It's all set: Nikki Grace (Laura Dern) gets disoriented on a dimly lit movie soundstage in Inland Empire.

After a debut that all but defined independent film, quickly followed by an uneven sojourn in mainstream cinema and then career-defining success with Blue Velvet and Twin Peaks, David Lynch has spent the past decade cultivating a serious obsession with not only the dark side of Hollywood but the very machinery of filmmaking.

I'm simplifying, of course, the path from Eraserhead to his new Inland Empire. But starting with 1997's Lost Highway, and continuing in Mulholland Drive, Lynch clearly seized on the camera lens as Alice's-looking-glass-as-funhouse-mirror. Far from letting go, in Inland Empire Lynch peels back new layers of shadow inside the little boxes where dreams flourish like bacilli.

Lynch's obsessions are often our gains. In Inland Empire, he expands on a prior one: Laura Dern's face. Dern portrays Nikki Grace, a Hollwood actress. Here her face is Lynch's K2, and in this three-hour pomo paranormal noir thriller he scales it from every approach. Inland Empire was shot on consumer-grade video and, no doubt intentionally, the grubby-pixeled look makes Dern's complexion as waxy as vanilla cake-icing. We see so much of her face, in fact, that it becomes defamiliarized, and we can perceive it again only when its inevitable topography is made strange -- contorted in anguish, let's say, or, in one shockingly lurid moment, as hideously warped as a Silly Puttied Sunday funny pancaked on a rain-soaked window.

Dern spends most of the film in open-throated outfits, her long neck white as tallow and vulnerable as a fledgling's. Yet her victimhood is one with her privilege. We meet her in her California mansion, where arrives a strange and elderly Hungarian woman with an expensive hairdo. The visitor accepts coffee, then without warning recites a creepy folk tale, and forebodingly remarks, regarding the screen role Nikki has been pursuing, "I definitely hear that you have it" (echoing Mulholland's minatory "This is the girl" casting order). Then the woman tells Nikki where Nikki would be if today were tomorrow -- and suddenly we see Nikki sitting on a couch across the same room, with two people who aren't even there.

Lynch does have a way of keeping us fruitfully off balance and ill at ease, and not just with his opening scene of a whore and her john caged in a swank bedroom, their faces digitally blurred as if behind nimbi of Vaseline. Nor his continued fascination (see Lost Highway, Mulholland) with darkened doorways and halls that might be bottomless pits but which -- even in best-case scenarios -- do not lead to day-lit breakfast nooks. Nor even with the controlled explosions of audio static that accompany many of Inland Empire's cuts, complementing that subtly nerve-fraying white-noise backdrop he's employed since Eraserhead.

There's also this: When Nikki's visitor enters the house, we watch in long shot, across a cavernous foyer, from what we implicitly assume is Nikki's point of view. But then Nikki herself walks into the frame. Who's watching?

Could it just be Lynch -- pretending to be Nikki? Probably it isn't Kingsley Stewart (Jeremy Irons), the scarf-adorned director of the film whose female lead role Nikki does claim, opposite actor Devon Burk (Justin Theroux). That unlikely scenario would make "Nikki" a role-within-a-role in Stewart's On High on Blue Tomorrows -- the Oscar-baiting romance that is, we learn, a "remake" of an unfinished film called Four-Seven, based on a gypsy folk tale and rumored to have halted production after its two leads were murdered.

And what of the bunnies? Intermittently in Inland Empire we see a distraught young prostitute watching a TV which plays an eerily lit, single-camera sitcom starring people dressed as giant bipedal rabbits, woodenly reciting, to a laugh track, knock-off Beckett: "I hear someone"; "I do not think it will be much longer now." And whose is the camera lens we see watching her?

That Inland Empire critiques a culture gagging on its own fictions is as plain as the tartare lips on supporting actor Harry Dean Stanton's greenish face. In the gypsy woman's tale, "evil" is born after a little boy leaves his house and sees his own reflection. And Narcissus goes electronic: Nikki and Devon are royalty on Marilyn Levens' TV celeb show -- "Where stars make dreams and dreams make stars" -- but only if they play along with tacky gossip about their nonexistent extramarital affair.

Meanwhile, some scenes in Inland Empire are clearly scenes from Blue Tomorrows. But about halfway through, it gets harder to tell -- and after Nikki and Devon actually commence an affair, Marilyn Levens' prurient winks start feeling as prophetic as the old Hungarian's soothsaying.

"My wife is not a free agent," Nikki's husband warns Devon; he also reminds him that "actions have consequences." Lynch's dream narrative is powered by undertows; subtexts metastasize like undiagnosed cancers. Nikki seems both a person and a poltergeist who haunts her. Or maybe she's a fictional character, haunted by a real person. Or the reverse -- or, a la Italo Calvino, a character in search of a scriptwriter.

Are the semi-comatose street people in one of this film's climaxes the non-actors they seem -- or actors acting like non-actors? Is that scene a neo-realist homage, or a parody of faux grit? And can we tell, even after watching the big camera (but not the one we're watching through) dolly back from what's revealed to be not a grubby city street but a soundstage?

Cinema, Lynch suggests, is an engine that consumes real lives to fuel fake ones. And whatever else it might be, Inland Empire is most harrowing rumination on the quicksand of media make-believe since Oliver Assayas's demonlover. Not because Lynch delivers that familiar news, but because he makes us feel it.