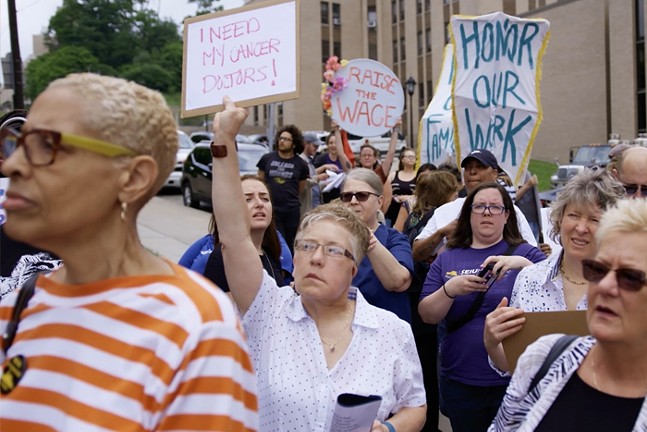 Photo: Courtesy of ABRAMORAMA
InHospitable
The Pittsburgh skyline is an easy sell. Show someone the view of downtown from PNC Park or Mt. Washington, and they’ll gravitate towards the pocket nestled against the water, a booming metropolis tucked along rivers, a city that makes perfect sense and no sense at all.

Standing out among the beauty are two buildings: UPMC, formerly the Steel Tower, an industrial wet-dream and the tallest building in the city, and Highmark, less an office building and more a lost set design from Blade Runner. InHospitable, the new documentary from Sandra Alvarez, premiering at the Manor Theater on Fri., Oct. 14, boldly peels back the veneer and asks: what if these buildings aren’t symbols of beauty, but of pain? What if these aren’t representative of a city’s achievements, but of its shortcomings?

The film is ostensibly about the nation’s dearth of affordable healthcare, and how a series of nonprofit hospitals seemingly made more profit than ever before, even as the care got more expensive and less accessible. However, despite a national reach, the focus lies primarily at the feet of Pittsburgh, specifically the behemoth that is UPMC. A mix of exposé, tragic first-hand accounts, and documentary storytelling, InHospitable spends most of its runtime making sure you leave the theater really fucking angry at the systems that are supposed to provide care.


There’s a downside to this, of course. Streaming services have given rise to the “rage doc”, films that are better at making you angry than being a great film. InHospitable suffers from some of this; it doesn’t justify its nearly two-hour runtime, and at times just tells us different versions of the same message — The American Healthcare system is broken — without adding any new revelations.

Additionally, if you’re a Pittsburgher, the timeline of the film comes off as jarring. The bulk of the events depicted here take place in 2019, most notably the devastating, but also distant, UPMC-Highmark split. As a result, we get talking-head interviews from State Rep. Ed Gainey (now Pittsburgh’s mayor), Attorney General Josh Shapiro (now a couple of weeks out from an election to make him governor), and others that make the film feel simultaneously urgent and a relic of the past. 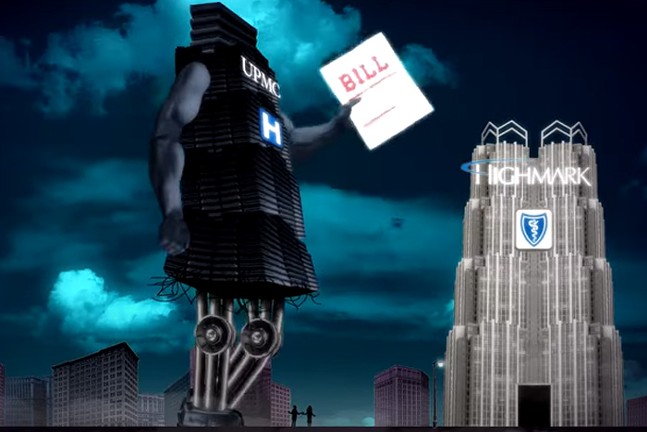 Screenshot
Animation still from InHospitable
Yet, the overarching themes are too important to Pittsburghers, and people in general, to ever truly make InHospitable anything less than a worthy watch. Alvarez is at her best getting in the weeds, following community organizers and, most importantly, patients who lose out by UPMC jacking up prices simply because they can. The film excels at showing the grip the hospital system has on the region, something that’s easy to take for granted as UPMC justifies its power, boosting its image through well-timed advertisements and PR reps whose salary is about the cost of one person’s cancer treatments.

As a movie in such a specific place in time, InHospitable can leave an audience feeling like the inevitable has already happened. But the other side of the coin shows a problem that isn’t going away, and the film makes a very strong case for people in the region to think just a little bit harder about why their non-profit hospital can afford a 30-foot tall statue in their building's main lobby.
InHospitable. Showtimes vary. Fri., Oct. 14-Tue.. Oct. 18. Manor Theatre. 1729 Murray Ave., Squirrel Hill. $7.50-9.50. manorpgh.com