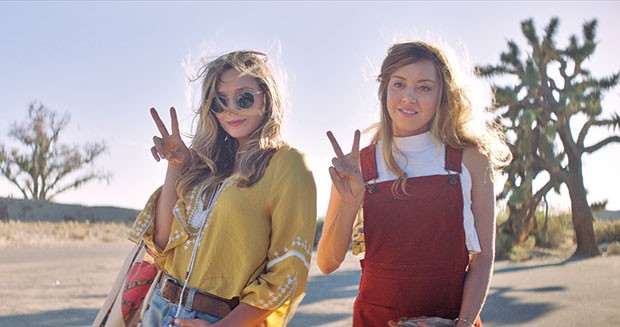 Ingrid (Aubrey Plaza) already got in trouble for cyber-stalking a young woman from her hometown. Now released from the psychiatric hospital, she’s right back on her drug: Instagram. There she discovers Taylor (Elizabeth Olsen), who documents the ideal life, where it’s all trips to Joshua Tree, avocado toast, boho dresses, and dogs with names like Rothko. Taylor is an “influencer,” whose confident edicts are preceded by “#,” as in #ridethesky and #bestdogever. Ingrid, meanwhile, is a social-media striver, the sort of person who when making a joke backspaces over “hahaha” and then “heheheh,” before settling on “heh heh” and pushing send.

Ingrid decides to be like Taylor: She moves to Venice Beach, rents an apartment from a guy (O’Shea Jackson Jr.) working on a speculative Batman script, and is soon stalking Taylor and her artist husband (Wyatt Russell). A few bold (and inappropriate) moves later and Ingrid is friends with Taylor (#omg). Plaza is an ace at playing demented women, and Olsen does a good job conveying Taylor’s enviable vapidity. Their over-excited girls’ trip to the desert is the film’s comic highlight.

Here, life is performance, whether to be played in the moment (accompanied by too-loud laughter) or “produced” for posting on social media. In theory, Ingrid is an indictment of such living, the quest for style points over substance, but it lacks punch. It’s after such low-hanging fruit, and yet I wished Ingrid could be sharper in its critiques of self-curated internet lives, and what impact these seemingly real unrealities have on folks. Technology is moving faster than mores, and it’s making fools out of plenty of us. But the film can’t decide whether pursuing validation through social media (by any means necessary) is a good thing; whether Taylor is savvy or soulless; and whether Ingrid is a figure of fun, pity, ingenuity, desperation or horror.