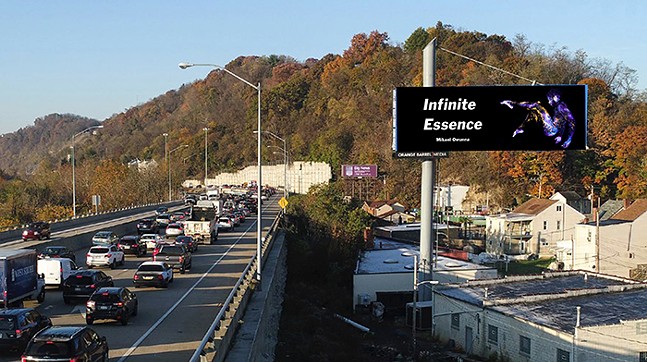 Image by Orange Barrel Media
Infinite Essence: Celestial Liberation billboard concept by Orange Barrel Media
The first official Juneteenth in Pittsburgh has resulted in some robust programming, with events highlighting Black leaders and creative professionals representing music, literature, and more. For local artist Mikael Owunna, the holiday – which pays tribute to the nationwide end of slavery in the United States – serves as a way to celebrate Black bodies, and make his art more accessible to communities often left out of the city’s art scene.

Starting June 18, those traveling through Pittsburgh might catch a glimpse of billboards and other signage featuring the work of Infinite Essence: Celestial Liberation, a large-scale public art project presented by Owunna and New York-based curator Larry Ossei-Mensah.

Owunna and Ossei-Mensah collaborated with the Ohio-based marketing company Orange Barrel Media to present the work on digital billboards throughout Pittsburgh. Infinite Essence works can also be seen in several venues, including the Pittsburgh International Airport, the Silver Eye Center for Photography, the Pittsburgh Glass Center, and the University of Pittsburgh Center for Urban Education.

The billboard portion will debut in tandem with the city’s Juneteenth celebrations, and run until June 30. Other venues will display Infinite Essence on different dates, with some going as late as Sept. 15.

Ossei-Mensah says that by partnering with Orange Barrel Media and other organizations in the city, he and Owunna have been, able to “organize a constellation of spaces” where Infinite Essence reaches audiences from the airport to Downtown.

By spreading Infinite Essence to more than one location, Owunna – a queer Nigerian-Swedish American artist whose work combines his engineering background with African spiritualism and cosmologies – feels that he can serve those communities who need it most. This is especially due to Owunna’s stated mission of using the project as a response to “negative stereotypes and pervasive images of Black death depicted in the media.”

“This work has a lot of strong potential for a really powerful public conversation about the Black body and the reference representation of the Black body,” says Owunna, who grew up in Pittsburgh and is now based in Highland Park.
click to enlarge 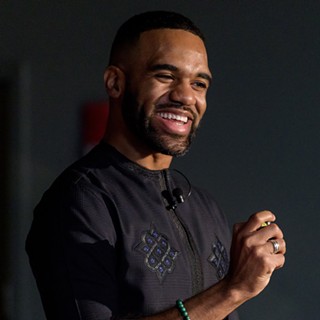 
He cites a 2010 study by Reach Advisors determining that museum- and gallery-goers in the U.S. are 89% white. While he admits that things have changed since then, with museums and foundations in Pittsburgh and throughout the country trying to better welcome diverse audiences, discrepancies still exist.

“And so thinking about, how do we access a larger public around these conversations, particularly engaging Black audiences and bringing other Black artists into the conversations?” says Owunna. “The public spaces are a great way to really catalyze these really powerful conversations about Black representation.”

Even out of context, Infinite Essence is a sight to behold, each image depicting a glimmering subject seemingly floating against a black background. Owunna combined his background in biomedical engineering to build a special camera flash that only transmits ultraviolet light. He then paints each model with fluorescent paint and poses them in complete darkness.

“When I press down on my camera shutter, my flash emits a beam of ultraviolet light, which interacts with the paint on the models’ bodies, causing them to fluoresce for a fraction of a second in the dark,” says Owunna.

He says this method allows audiences to "see an alternative vision for what the Black body represents, moving from the visible spectrum, where we have anti-Blackness and white supremacy” to “seeing the Black body as these cosmic vessels of eternal life.”

Owunna has used this approach over the past five years. He even contributed a fluoresced self-portrait to The Self, Realized: Queering the Art of Self-Portraiture, a 2019 group show at the Brew House Association.

For Infinite Essence, Owunna worked with about 20 Black models representing a range of body types.

Owunna will also expand the mission of the Infinite Essence by working with local organizations and businesses to present a host of interactive programming throughout the month of June. This includes Art as Liberation: Celebrating Black Art in Pittsburgh on June 18, an event presented by Owunna, 1Hood Media, and other groups that will feature 15 Black visual artists at City of Asylum (see the Pittsburgh City Paper Summer Guide for more information). Also happening is a Juneteenth Brunch and Conversation with Owunna and Ossei-Mensah hosted by Everyday Café, a Black-owned eatery in Homewood.

As the more public-facing aspect of Infinite Essence prepares to launch, Owunna reflects on how the project honors Juneteenth and the Black Pittsburgh artists who came before him, such as painter Romare Bearden and playwright August Wilson.

“For me, it was really such a powerful acknowledgment of the history of African-American artists in particular,” says Owunna. “And so that's why it was really important also for us to invite the wider community of Black artists in Pittsburgh for this programming, to think about the ways in which this larger Black arts ecosystem has been operating, and the legacies that connect to this larger public art campaign that we're showcasing.”