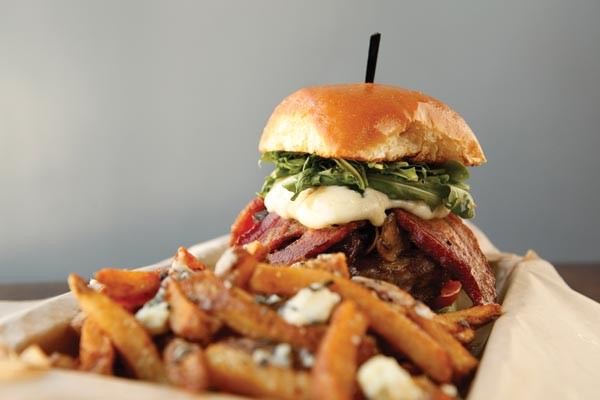 Pittsburgh's relationship with its industrial past is complicated, to say the least. Today's civic boosters work tirelessly to dispel any remaining ideas about the Smoky City. But that's not to say that we've left behind our steelmaking heritage. It's more like we've transformed it, in the furnace of our collective imaginations, into a kind of mystique.

Newcomers to the city seem, especially, to want to connect with Pittsburgh's history of industrial grit. With actual worker bars increasingly thin on the ground, this has created a market for places that evoke, rather than embody, industry.

The most recent example, and perhaps the one that pushes this phenomenon to its most sophisticated, is the Industry Public House, in Lawrenceville, the local epicenter of rust-belt chic. A former showroom for Steel City mattresses, the space has been stripped down and rebuilt to display all of the most eloquent symbols of industrial elegance, shorn of their grease, grime and clamor: exposed brick; exposed-filament light bulbs (even on the tap handle for the house microbrew); butcher-block tabletops supported by steel I-beams; and industrial metal stools. In a concession to modern casual-dining convention, an array of flat-screen TVs hangs on the walls.

The menu (printed on checklist-style sheets clipped to little boards) reflects an updated approach to the hearty fare mill workers would have consumed: "burghers" (albeit with toppings such as red-onion marmalade and sweet pineapple calypso mojo), sandwiches stuffed with smoked meats, steaks and fries. Also, more lobster, salmon and, probably, salads than a typical Pittsburgh laborer would have seen in his life, plus an extensive list of craft brews, local Wigle whiskey and artisanal cocktails. Wings seemed like a good place to start. We perhaps misunderstood the "Industry IPH sweet-and-sour sauce," a wing topping made with the house's pale ale; we focused too much on the addition of the hoppy beer and overlooked the suggestion of unctuous sweetness. The sauce itself wasn't poorly balanced, but we found the plethora of maraschino cherries, both under and on top of the wings, hard to square with chicken. The poultry itself was quite good: modest in size, but succulent and with excellent crispiness despite the thick sauce.

The farmhouse burger played more successfully with sweet and savory, putting an entire country breakfast — fried egg, bacon and ham — atop a big beef patty. The ham was honey-glazed and appeared to be hand-sliced from a roast in the back; this was no deli cut. On its own, the glaze was touch too sweet, but it worked against smoky bacon and a burger that approached, but didn't quite match, the desired richness.

The smoke-stack sandwich appeared to be created just for Jason, with shaved ribeye and aged cheddar on sourdough toast with horseradish. But it didn't quite come together, mostly because the ribeye was a touch charred. The char would have worked on a thick slice with a rare interior for contrast, but on shaved meat, it meant that every bite was dominated by the blackened flavor; a meager topping of arugula didn't help much, either.

Instead of more fries on the side, we ordered Brussels sprouts with wild-boar bacon and gorgonzola from the "Options and Upgrades" list. While the pairing of the sprouts with the intensely flavorful, juicy bacon and tangy cheese was felicitous, even those at our table with the highest tolerance for lightly cooked vegetables agreed that the sprouts were underdone.

That marvelous wild-boar bacon made another, unscheduled appearance in what would have been lobster mac-and-cheese. The kitchen was out of lobster, but substituted the bacon and charred tomato; the result was so good, so full of creamy, salty, smoky savor brightened by the astringent sweet-tart tang of the lightly grilled ripe tomatoes, it should have a place on the permanent menu — at least, in tomato season.

Another of Industry's few entrees is pot roast, sampled by a dining companion who admired its moist, tender texture and rich flavor.

While the kitchen fumbled some of our dishes, we feel that Industry offers the capacity for good food, served in a comfortable, postindustrially-themed space. The city has evolved: Fifty years ago, shot-and-a-beer bars sustained the strong-backed workers of Lawrenceville; today, Industry Public House interprets that tradition for those who labor daily in ergonomic desk chairs.