They look like Rockem Sockem Robots, just without the snappy colors. 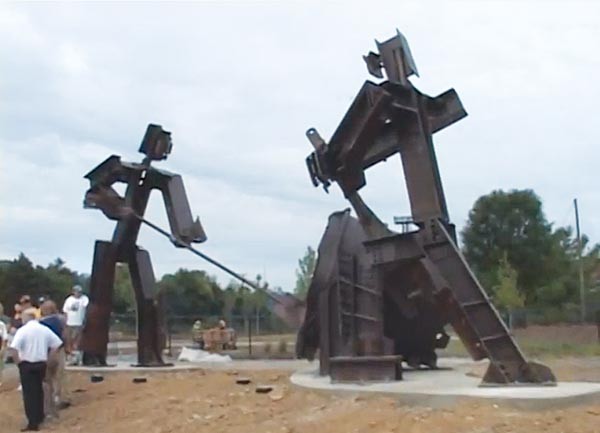 "The Workers," by Tim Kaulen and the Industrial Arts Co-op.

Size matters. At least when we're talking about outdoor sculpture. Public art often must compete with its surroundings, and one strategy is to go big and bold. Think Claes Oldenburg's 101-foot-tall baseball bat in Chicago, Fastwürm's 100-foot "Woodpecker Column" in Toronto, or Jonathan Borofsky's 48-foot "Hammering Man" outside the Seattle Art Museum. Playing with scale is common because it offers the viewer something unexpected.

Locally, artists of the Industrial Arts Co-op (IAC) often use the monumental to great effect. Their "Rankin Deer" is a 45-by-35-foot deer head made from industrial scraps that sits among the ruins of the Carrie Furnace. IAC founding member Tim Kaulen's heron sculpture at the Children's Museum, "One Great Blue," stands 15 feet tall.

Kaulen and the IAC are primarily known for guerilla street art. Formed in the mid-1990s, the IAC has focused on transforming used industrial materials into art in public and abandoned spaces. Often using components found on site, the artists exploit scale, location and the unconventional to create visual surprises. The region's many defunct industrial spaces provide ample inspiration.

Crucial to IAC's process is collaboration among artists. This has worked well for "unofficial" projects, but for the group's first official and permanent site-specific sculpture, "The Workers," the complex machinations necessary to create a public art project seem to have taken a toll.

The piece, begun 15 years ago as a commission from the City of Pittsburgh and the Heinz Endowments, is ultimately awkward and lackluster. Installed at South Side Riverfront Park, "The Workers" depicts two steelworkers who are a commanding 20 feet tall. But while it reflects the colossal human contribution to the steel industry, it is neither graceful enough to inspire contemplation nor cartoony enough to cause delight.

Levity can be tolerable in a commemorative piece, but the figures in "The Workers" are ambiguous. They look like Rock'em Sock'em Robots, just without the snappy colors.  It's hard not to compare the piece to the beloved and eye-catching "Arch," Glenn Kaino's playful 20-foot Transformer sculpture that once resided at Seventh Street and Fort Duquesne Boulevard.

"The Workers," appropriately placed at a former industrial site turned recreation area, and made from repurposed steel, will no doubt have its admirers. Its large scale is certainly a fitting tribute to the region's heritage, and its raw physicality cannot be denied.

But given that both IAC and Kaulen have a proven track record, it's not clear why their piece, though big, is so bland.