Indian Spices is a new restaurant in Downtown's Cultural District, but unlike other recently opened establishments just a tandoori's throw away, it has the modest, cozy character of a neighborhood eatery rather than a suave setting for pre-performance, date-night dining. Within the distinctive lavender- and eggplant-painted walls left behind by a previous occupant are white tablecloths, buffet tables and a minimalist approach to the touristy wall hangings that can be the calling card of many ethnic restaurants. The cuisine is Northern-style and mostly familiar, although a few chef's specialties were new to us.

Unfortunately, they were also new to our server, who was unable to help us with basic questions about the food. We had these questions because, while the menu provides cursory descriptions of some items, it supplies only the names of others, all according to a logic (or lack thereof) we could not discern. But to Angelique's inquiry about lamb pasanda, a chef's specialty, our server shrugged and demurred that she was a vegetarian. Certainly this excuses her inability to explain the flavor from personal experience. But it is no excuse for being unable to name the general character or ingredients of the dish, or even to offer to find out. Her explanation of onion bhajiya -- fritters of onion fried in chick pea-flour batter -- was barely adequate, and her attentiveness in a nearly empty dining room was minimal. Luckily, we did not have a performance to catch.

More problems cropped up with the bottle of wine we brought. After the server ignored it for some time, we asked to have it opened. It was taken to the kitchen; it returned unopened, but with the cork pushed down into the bottle. It seems likely they didn't have an opener and were trying to improvise, but this was another problem that could have been solved or avoided with some dialogue on the part of our server.

Despite the poor service, we are always prepared to enjoy Indian food, and our first item, samosa chat, was a promising start. This stew-like Indian snack has as many variations as it does cooks. Indian Spices starts with small, flattish potato pastries and adds chick peas and a richly flavored gravy of sweet tamarind chutney, tangy yogurt, aromatic herbs and piquant spices. A dice of fresh onion added zing, while both the toothsome samosas and nutty chick peas nicely supported the intense flavors of the sauce.

The onion bhajiya merited its status as a specialty. Instead of being cut and fried in rings, the onion was shredded and fried in clumps to create a tentacled mass. Practically safety-orange in color, the bhajiya were crisp without, moist and tender within, and delicious with the chutneys on the table.

Despite not knowing what it was, Angelique took the plunge and ordered the aforementioned lamb pasanda; had she known it contains raisins, an ingredient she usually avoids, she would not have. Despite this, she enjoyed the creamy gravy, punctuated by large chunks of meat, and well-balanced among spicy notes, savory ones, and the sweetness contributed by those juicy golden raisins.

An entrée of chicken biryani was a mixed success. The flavor blend of raisins, almonds and spices was copacetic, and the plenteous chicken was wonderfully tender and moist; yet the fried onions that are one of the hallmarks of biryani were entirely missing, and the whole dish was a single, sticky mass defying our ideal of a fluffy pile of ingredients and individual grains of rice.

Mixed grill, from the tandoor, was a similarly mixed bag, with tender, moist chicken tikka, but dry lamb chunks, mediocre chicken on the bone, and seekh kebab, grilled ground lamb, that was unevenly cooked, leading to alternately dry and moist bites. But paneer naan -- yeast flatbread filled with fresh yogurt cheese -- was a real treat, with thin smears of mild, almost sweet cheese just beneath the extra-crispy crust.

Ethnic restaurants frequently follow a standardized formula set by a combination of customers' expectations and owners' reluctance to take chances. In the absence of an innovative menu, we look for a restaurant to stand out in its preparation of classic dishes and in its service. At Indian Spices, the uneven food quality alone didn't make for a disappointing meal. While many dishes were flawed, none were abject failures, and some were unqualified successes. But the service, by turns indifferent and incompetent, must improve before we -- or anyone -- can fully enjoy a visit. 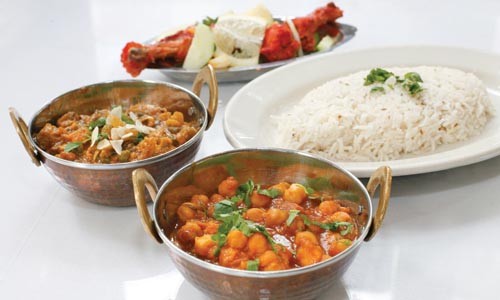