Inclusivity and connectivity are the goals of Hauntsville: A Higher Realm | Music | Pittsburgh | Pittsburgh City Paper

Inclusivity and connectivity are the goals of Hauntsville: A Higher Realm 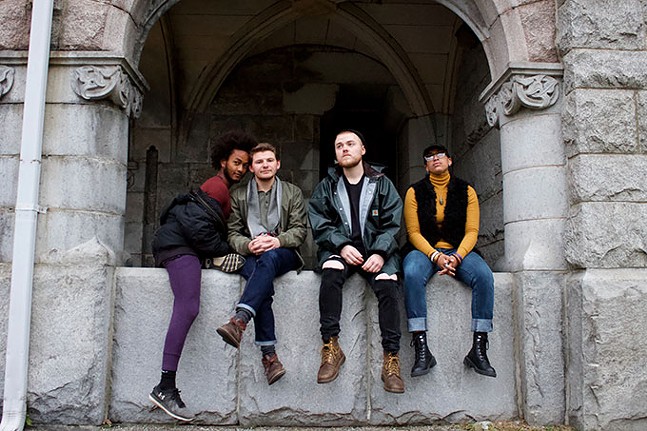 Halloween is often associated with immaterial fears of hauntings, ghost stories, and things that go bump in the night. Anthony Resch, fka Royal Haunts, and Joshua Orange are instead doing the spooking themselves with their Halloween event, Hauntsville: A Higher Realm.

“We really wanted to have a Halloween event that didn’t just focus on the negative ideas of how the metaphysical interact with people’s lives,” says Orange. “People are sometimes like, ‘What’s not real can cause me distress.’ Our idea is, 'Why can’t something that’s not real also cause you gratitude, appreciation, or happiness?' We wanted to emphasize the idea of not being haunted by things before, but by us haunting upwards.”

Guests are asked to come as the highest versions of themselves, or the “mythological you,” by incorporating an article of clothing from someone, someplace, or something that may not be around anymore.

“[You] bring that energy and appreciation into the room,” says Orange. “Because whether you think about it as something that’s nonphysical or [intangible], it still influences the mindset that people are in.”

Inclusivity and connectivity is the goal, with a focus on audience engagement. On Resch’s end, Hauntsville, which is an events series, was created to run shows in the Pittsburgh scene from his perspective. His songs can vary from one track to another, and he had a lineup of singles he wanted to release. Resch figured he would curate a group of artists for those singles rather than around general sound.

“One of the things that exhausts me about local scenes, not just in Pittsburgh, is [that] there doesn’t seem to be a reason why certain acts or bands are playing together all the time,” says Resch. “I wanted Hauntsville to feel like there was a reason why each of these musicians were chosen and there was a connectivity between all of us, a common string between us musically and especially.”

Resch cited feeling like the odd one out when he performed on punk or all-rap bills. “I’m an R&B singer and pop producer,” says Resch. “My energy was always missed. Even if I performed my heart out, people would be standing there, not really caring.”

Hauntsville’s concept was borrowed from that of independent labels, where musicians and bands are united by a similar mindset.

“The idea was to create something more intentional than just having musicians come and play, to feel more like a party than a concert while also having all the professionalism and strength from a concert venue,” say Resch. “Once Josh got his hands on it, it evolved into something more colorful and spontaneous.”

Resch brought the idea to Orange, and over the summer they had their first iteration of Hauntsville. During the inaugural event, Resch premiered his song “Purple Light.” For Hauntsville: A Higher Realm, he is releasing “Might Die (Without Ur Love).”

Also during that time, Orange was in the process of creating Ou_rs, a community-driven effort for people to feel more involved in the organization processes. In June, Ou_rs, along with Queerling Collective, was awarded a grant from Awesome Pittsburgh to start brunchouse, a quarterly daytime brunch and electronic house music event series

“The idea is to make a sense of community between the people that come and the people who run it,” says Orange.

Attendees pay what they can, and if they want to cook, DJ, or learn new skills, brunchouse is more than happy to incorporate anyone into the process.

“Ou_rs lies in the community,” says Orange. “Through this greater decentralized group I’ve personally been able to engage in an array of arts and trades which were otherwise inaccessible to me. Without as staunch financial or social barriers to entry. Which I think is important for younger people to see — a culture of genuine mutual support.”

Hauntsville is a manifestation of those values mixed with Resch’s musical agenda.

“It’s about connectivity,” says Resch. “A show doesn’t have to be a show in the same way that we’ve been comfortable with for however many years. It can be about ourselves and our perception.”