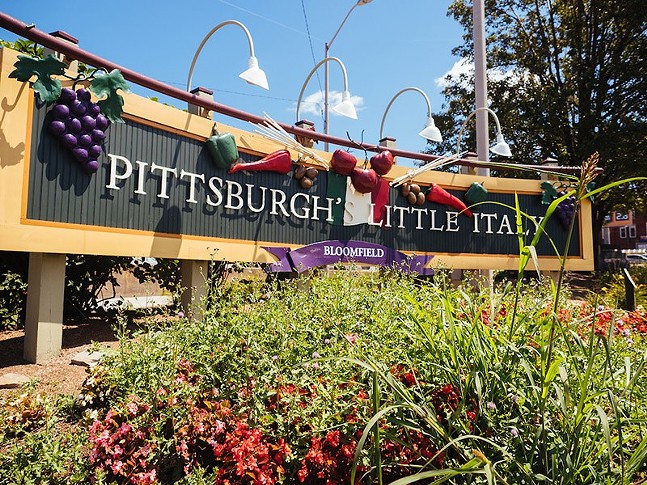 CP photo: Jared Murphy
The Little Italy sign in Bloomfield
In June, Pittsburgh City Council voted to give Lawrenceville permanent inclusionary zoning, which means that large, new developments are required to include a certain percentage of affordable housing units in the neighborhood. The decision was hailed by housing activists, as Lawrenceville is widely considered as one of Pittsburgh’s most expensive, and increasingly gentrifying, neighborhoods.

Gross introduced legislation on July 13 that, if passed, would create a temporary overlay zoning district that would give Bloomfield and Polish Hill inclusionary zoning for 18 months.

This overlay district would require that any new construction of buildings containing 20 or more dwelling units, 10% of on-site units must be affordable to people making 80% of the Area Median Income. If a larger, new construction project wants to build its affordable units off-site, they must be 12% of the units being built.

“Both neighborhoods want to be sure that any new construction includes some units that residents can actually afford,” says Gross. “That is what inclusionary zoning does, it requires new buildings to have some units at lower prices. With an [temporary overlay district], the neighborhoods get to try out these policies, have lots of community input, and then decide whether or not it works for them to achieve their goals.”

Christina Howell of the Bloomfield Development Corporation supports the proposal and says that, while developers would be required to include units affordable to people earning 80% AMI, Bloomfield really hopes to attract developers that would make units affordable to 60% AMI. She says this will provide people with housing vouchers the ability to live in affordable units and only pay rent that is 28% of their income.

“We have some pending developments in Bloomfield and Polish Hill that could change the face of these neighborhoods for decades,” says Howell. “Rents have doubled or tripled over the last few years.”

Howell says Bloomfield has seen more flippers, which has led to dramatic increases in rents and housing prices, and believes inclusionary zoning can be key in preserving some affordability. She says one rental Bloomfield that was $885 a month was recently flipped and is now marketed for $1,700 a month.

Howell recognizes that inclusionary zoning likely won’t necessarily lead to scores of new affordable units overnight, but is hoping that BDC’s support of density will appease any developers wary of affordability requirements.

“If they build more, then they also get more market-rate units, they get both,” says Howell. "We are advocates for density. Bloomfield is a historically dense neighborhood.”

She says she hasn’t heard of any negative side effects out of Lawrenceville, which has seen 40 new affordable units over the two years of its inclusionary zoning pilot.

“We want working-class people to live in the neighborhood and to stay in this neighborhood,” says Anderson.

Anderson acknowledges that inclusionary zoning might deter some developers from the neighborhood, but says it's important for people to realize Polish Hill wants affordability to be a part of the community.

“There will be some developers that won't want to build, but ultimately we don’t want to have a relationship with them if they don't see affordability as important,” says Anderson.