For summer: a brainy thriller that's several layers of fun 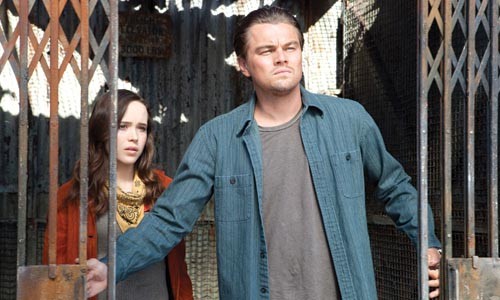 Some time in the not-too-distant future (or perhaps even right now), corporate espionage takes a decidedly new form. No more dusty techniques like furtive photocopying or zipping hard drives to a disc. Now thieves are searching where all the best stuff is hidden -- inside your mind! While you're sleeping!

It's simultaneously simple and complicated: Thieves enter your dreams and subtly direct you -- awake in the dream -- to subconsciously (unconsciously?) reveal what they wish to learn. But to get there, such corporate raiders must create a dream state that they control and can enter at will.

Trust me when I say all of this is a lot less confusing when explained on screen in Christopher Nolan's captivating hybrid thriller Inception. Not that you should completely relax: Like other films about shifting times and spaces such as The Matrix (or the awesome but little-seen Primer), paying attention is crucial.

Dom (Leonardo DiCaprio) and his partner Arthur (Joseph Gordon-Levitt) are crackerjack nabbers of thoughts. That's why Saito (Ken Watanabe) hires the pair to perform an even trickier bit of corporate malfeasance: To gain advantage over a business rival (Cillian Murphy), Saito needs to have an idea implanted -- an inception, not an extraction.

Dom initially demurs: Ideas must be inserted several dream states deep in order to germinate naturally. Multiple levels add risks, and Dom warns that creating a specific outcome cannot be guaranteed. Once the seed is planted, emotions, memory and other intangibles of the victim's consciousness can affect its development, leading to unintended consequences. Ideas, Dom explains, are like a resilient parasite and impossible to undo.

Saito offers a pay-out that Dom can't refuse -- a chance to reunite with his children, from whom he's been separated after being accused of murdering his wife (Marion Cotillard). Dom assembles a dream team, including new hire, Ariadne (Ellen Page). Ariadne is an "architect," tasked with creating realistic, maze-like dream worlds, in which the mark and Dom's team will "meet." Also on board: Eames (Tom Hardy), a disguise expert, and an underground chemist who has the critical sleep-aid needed for the gang to penetrate several layers of dreams.

I like that Nolan, who also wrote the story, has the confidence to just present this unthinkable activity as relatively run-of-the-mill. Inception offers viewers the big picture of how these dream-jobs work, but not the tiresome micro-details. (Naturally, all you need to rig a dream-job is a briefcase with knobs and some wires.) The film does offer several info dumps. But they're described quickly and accompanied by distractingly cool visuals, such as during the film's set piece, in which Paris folds over on itself. So admittedly, there were some details I missed despite my best efforts to keep several concurrent storylines (plus flashbacks) straight.

But even if slightly confused, you'll be entertained. Inception draws from such proven genres as heist films (albeit in reverse); con capers (this may not be the longest con, but it's perhaps the deepest); sci-fi-ish thrillers; straight-up action flicks; tragic love stories; and metaphysical mind-bends. Nolan has tackled many of these before, from the time-shifting and memory mishaps of Memento and large-scale action from Batman Begins and The Dark Knight, to the high-minded pseudo-science sleight-of-hand of The Prestige.

Here, Nolan has the advantage of working in the dream state, where anything can happen. It's a handy narrative loophole that helps bridge multiple narratives and timelines, as well as allowing Nolan to indulge in some showy spectacle. Thus, the viewer gets to wander through a crazy dream-only world of Dom's earlier creation (and watch it spectacularly collapse). Nolan also gets to invent action specific to unique dreams. Some of it makes sense and is a neat visual trick, such as the mechanics of weightlessness while on the job; other scenes, including a confusing snowmobile chase, feel as rote as in ordinary popcorn flicks.

And speaking of familiar: Anyone who saw DiCaprio in Scorsese's Shutter Island last year will mark a few surface similarities between the two films: its troubled protagonist, tormented by the memory of his murdered wife; the difficulty of distinguishing reality from dreams; and a director's quest to provide a flip-floppy brainy thriller that's also wholly palatable as genre entertainment.

The puzzles in Inception, though, are both more complex and coherent. The many layers do collapse elegantly on themselves to form a satisfying conclusion. If the final scene is somewhat open-ended, its possible resolutions are all supported by the intricate storytelling that precedes it. We have been warned: Once an idea is planted -- and Nolan here worms deep into our eager brains with his perplexing and intriguing plots -- the individual ultimately controls the outcome. Whatever you think happened did.