In the wake of a mass shooting in Pittsburgh suburb, residents and officials are taking action

“We need to take a stand that we are not going to stand for this.” 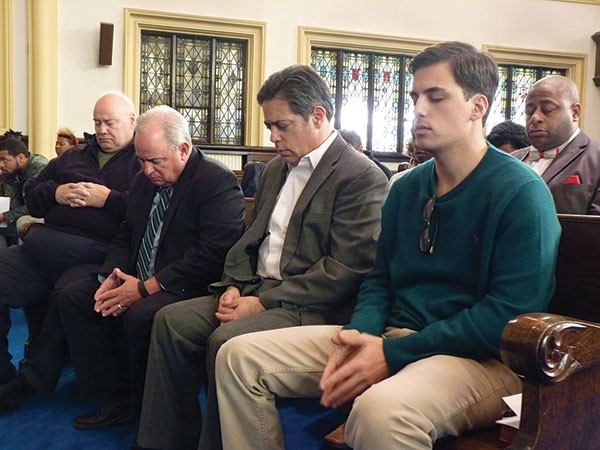 Photo by Ryan Deto
U.S. Congressmen Mike Doyle (second from left) and state Sen. Jay Costa (second from right) bow their heads in a moment of silence for those killed in the Wilkinsburg shootings.

She spoke through tears to a crowd of about 300 concerned citizens on March 12. She was overcome by the number of people who showed up on a Saturday afternoon to discuss the borough’s plan of action in the wake of the March 9 mass shooting that took the lives of five adults and an unborn child. McCarthy-Johnson said she hopes the strong turnout will continue to show that the community is “not going to let this keep happening.”

“We are not just here for one meeting,” she said. “We are here to move forward.”

Jared Allen, of Wilkinsburg nonprofit Community of Hope, attended the meeting, at the Second Avenue United Methodist Church, in hopes that unity increases among community members to address Wilkinsburg’s problems. He said that a positive response to the tragedy in Wilkinsburg will create a plan of action, and the community has “needed to take action for a while now.”

Wilkinsburg Borough Councilor Marita Garrett says there has been strong community engagement in terms of block watches and public-safety forums. In fact, about 25 residents spoke out at the meeting. Garrett says she hopes that this type of engagement will result in action.

“We need to take a stand that we are not going to stand for this,” she says. “No more vigils, no more meetings to discuss this, we have to take action.”

U.S. Congressman Mike Doyle also attended the meeting, along with a bevy of other elected officials including state Sen. Jay Costa, state Rep. Ed Gainey and members of the Wilkinsburg Borough Council.

Doyle said he was heartened by the support that showed up on Saturday but added that this kind of grassroots work needs to continue. “We can’t forget about what happened here in two weeks,” says Doyle.

He also spoke out about how increasing civic engagement can be a positive response to tragedy. “This [kind of incident] is tragically common in a lot of communities, but it is good to see a community rallying and saying, ‘We are not going to let this drag us down,’” he said.

Doyle adds another way to increase engagement is to publicize the community leaders and volunteers that are “working hard for free.”

Garrett also urged residents to step forward if they have information to share about who might have carried out last week’s shooting.

“There are people who know a lot about the suspects and then no one speaks up,” says Garrett. “We need to break down people who are not sharing information that could bring justice for these families.”

Some community members are coming forward with information, but feel their voices are not being heard.

Wilkinsburg resident Rose Brice spoke out at the Saturday meeting and said she and her neighbors have been calling to provide information to the police, but are not receiving responses from authorities.

“People are calling who have important information. Why are you not returning people’s calls?” she said to Wilkinsburg police representatives who attended the meeting.

City Paper spoke to a resident, who requested to remain anonymous, and who lives nearby the site of the March 9 shooting. He says he called detectives, who left a card on his door. But, he says, he never received a follow-up call.

Wilkinsburg police did not return requests for a comment, but the borough’s police department is not handling the case. Allegheny County Police are investigating. In response to residents’ claims that they are being ignored, county police Lt. Andrew Schurman issued this statement:

“Since the March 9 shooting, Allegheny County Police have received numerous tips and information from the public and are following up on each and every one. In doing so, some contain duplicate information, or may [have] some detail that does not require a sit-down interview, but the department is moving methodically through all of the information being provided to them.”

Schurman also requested that information relative to the shooting be directed toward the Allegheny County Police Department’s Homicide Unit, at 412-473-1300, or to the Bureau of Alcohol, Tobacco, Firearms and Explosives hotline, at 800-283-4867. A $20,000 reward has been offered for information leading to the arrest and conviction of the suspected shooters.