In The Pittsburgh Anthology, local talents paint a multifaceted portrait of the city

Pittsburgh stories are often stories about how people became Pittsburghers. Eric Boyd’s starts in North Carolina. That’s where his Pittsburgh-native father moved when he couldn’t find work here, and where he met Boyd’s mother. In 1998, when Boyd was 9, the family came north, and he grew up partly in West Mifflin and Homestead. Now 26, Boyd lives in Lincoln Place; he writes for literary publications, sells his plasma and serves as a paid subject in medical research.

Boyd’s bio doesn’t reflect the New Pittsburgh of eds and meds, high tech and hipsters, that civic boosters and national-media list-makers like to tout. But Boyd has made his own contribution to how the city is portrayed: He’s editor of The Pittsburgh Anthology, a new book compiling nonfiction, poetry, visual art and photography about the city. The book is the fifth in Cleveland-based Belt Publishing’s series of anthologies about Rust Belt cities, and it’s good, sometimes great, stuff. The 38 contributors range from 15-year-old Nico Chiodo (writing about the Pittsburgh Banjo Club) to nationally recognized talents like poets Terrance Hayes and Robert Gibb, artist LaToya Ruby Frazier and memoirist Lori Jakiela.

Boyd is an award-winning writer whose work has appeared in publications including Prison Noir (Akashic Books), an anthology edited by Joyce Carol Oates. When he issued a call for submissions for Pittsburgh Anthology, Boyd knew less what he wanted than what he didn’t. He didn’t want sports (too obvious, and so ubiquitous it shows up anyway); he didn’t want nostalgia; and he didn’t want cheerleading. Even so, “The book was becoming way too much of a pep rally at one point,” he acknowledges. 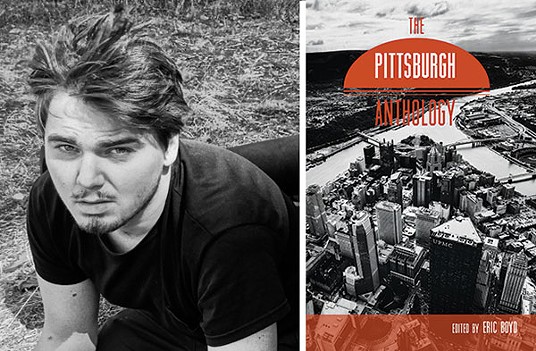 Essays that made the cut do celebrate things like Pittsburgh’s film culture, geek/con gatherings, the revival of Dormont’s Hollywood Lanes bowling alley and, yes, sports (though the latter is an historically minded piece on women’s football, by occasional CP contributor Jody DiPerna).

However, many of the book’s most memorable pieces reflect Pittsburgh’s more sobering realities. Frazier’s searing photos depict African-American life in her hometown of Braddock. Journalist Cody McDevitt explores the perils of casino gambling. Boyd himself illuminates the strange world of a human guinea pig involved in a psychological experiment. Matthew Newton offers a potent character sketch of his uncle, an alcoholic Vietnam vet, set in the depressed, post-Big Steel Mon Valley of the 1980s. Ben Gwin, himself a recovering alcoholic, recounts a painful custody battle with a heroin-addicted ex. And Dave Newman recounts his experience as a social-work intern, plumbing with an angry poignancy the underside of an economy where society’s losers are left to fend for themselves.

Boyd says he’s upset that he was unable to attract any submissions on local queer culture. But the anthology accommodates diversity of various kinds. Yona Harvey probes race in Pittsburgh through the photos of Teenie Harris. J.J. Lendl’s graphic-novel-style “The T to Nowhere” is a tongue-in-cheek look at life in the outlying neighborhood of Beechview. In “Is Pittsburgh America’s Most Livable City?,” Sean Posey highlights telling ironies by juxtaposing Bon Appetit plaudits for Pittsburgh’s restaurant scene with the city’s widespread food deserts.

For variety of tone, there’s Melanie Cox McCluskey’s sharply limned series of insider’s vignettes from the Mount Washington real-estate market; a colorful selection of Robert Qualters’ iconic paintings; and comically disturbing character studies in oil paint by Rebecca Morgan. And if you’re going to meditate on the status of Pittsburgh’s past in its present, you could scarcely have a better guide than Robert Gibb, whose five poems reprinted here include “Steelworkers’ Lockers, Pittsburgh History Center”: “The Forlornness of Metal they might as well / Be titled, these salvaged relics, props from a set / Long struck …”

Regarding the Pittsburgh Anthology’s purpose, Boyd says, “I was really hoping we could do something where the city doesn’t know what it is any more. … The city is definitely changing, but we don’t know at what cost.”

Poet Ann Curran’s amusing homage to Pittsburghese notwithstanding, there’s little to nothing in Pittsburgh Anthology about such time-honored tourist staples as incline rides, Primanti’s and the Kaufmann’s clock. On the other hand, neither is there much about such current shibboleths as $300,000 condos, artisanal cocktails and Google.

Boyd agrees a New Pittsburgh is upon us. “That’s the way that I feel, and the way I think many of the contributors felt,” he says. Indeed, the book’s Sept. 10 launch party is taking place at Brillobox, a hip, decade-old joint that nicely bridges Pittsburgh past and present. But Boyd adds that while he doesn’t think the book needed to explicitly address this sea change, “I think it’s a feeling that ended up being in the book because it’s so ingrained in many of us.”