Playwright Ruhl runs herself, and us, ragged with her scattershot delivery 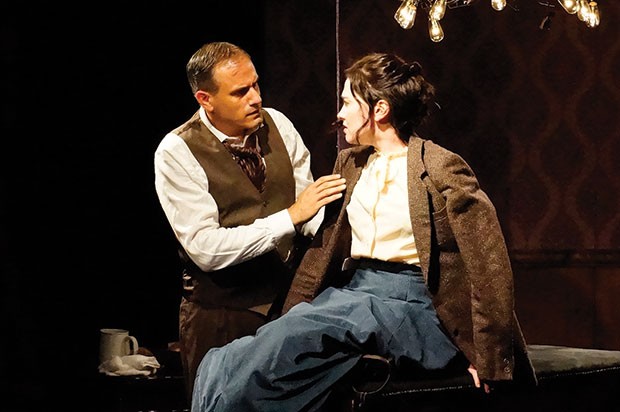 Or try this: In a highly stylized and theatrically charged landscape, a young woman, Catherine, relentlessly rattles the bars of convention, searching for her purpose in the world.

Then there’s this: A Victorian wife and mother is slowly grasping that the reason her marriage is lifeless might be her unexplainable “interest” in other woman. Or you could follow Elizabeth, a black housemaid whose newborn has just died and is coerced into serving as a wet nurse for a wealthy white family. And I haven’t even mentioned a passionate and achingly blocked artist, traveling the world seeking his muse.

There’s chatter about art, science, grief, electricity and, above all, 19th-century women’s sexuality and the way women and men navigated it.

Whatever great intentions Ruhl (and Throughline) have with this 2009 play, it’s all for naught. There’s just too much going on, with Ruhl tilting at every windmill in a 50-mile radius. Instead of focusing on one story — and one style — she runs herself, and us, ragged with her scattershot delivery.

Every character is in a different play, and it would take a Herculean effort on the part of any director to get each actor working together in the same style. Throughline director Abigail Lis-Perlis doesn’t seem to bother with playing style, or clarity, and leaves a highly disjointed cast fending for itself.

Moira Quigley’s start as Catherine is a bit rocky, but by evening’s end is powerful and moving. And Ricardo Vila-Roger has the thankless task of playing Dr. Givings, who’s not so much a character as the sketch of one. But Vila-Roger brings a rewarding, forceful conviction.

Our Town at Pitt Stages