"It has to keep Pittsburgh as film-friendly as it already is."

Everyone knows the big ones: The Dark Knight Rises, She's Out of My League, Jack Reacher, Me and Earl and the Dying Girl and the soon-to-be-released Southpaw. But according to the Pittsburgh Film Office, there's much more: Since 1995, 135 films have been shot in Pittsburgh, and many more have recently wrapped or are in production.

Next year, Los Angeles-based filmmaker Jeremy Michael Cohen wants to add to the list. The New Castle native will return this winter to shoot Yinz, a film that will be set in his hometown, but shot in several Western Pennsylvania locations.

"I've been looking forward to working in Pittsburgh," Cohen says from L.A. "I'm used to dealing with a ton of red tape in Los Angeles. One of the things that drew me to Pittsburgh is not having to deal with that red tape. I found that people were incredibly helpful."

Now, though, a proposed new ordinance could change the way filming is done. For the first time in the city's history, filmmakers would be required before shooting here to obtain a permit from the city's soon-to-be-created film-permit office.

Little is known about what the permitting process would look like. But according to the legislation, Mayor Bill Peduto's office will be responsible for setting regulations and processing the permits. 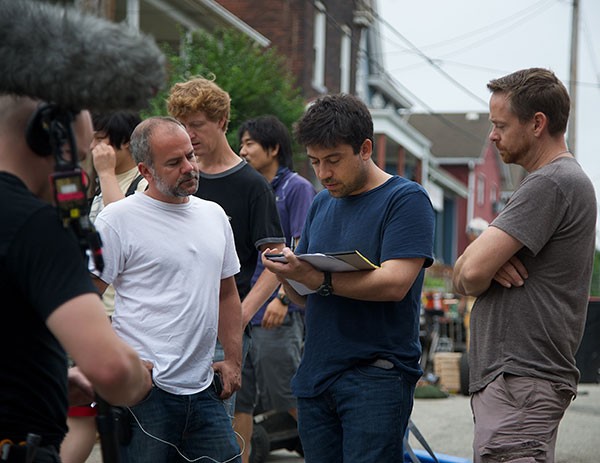 Director Alfonso Gomez-Rejon (center, with notebook) on the set of Me and Earl and the Dying Girl, shot last year in Pittsburgh

"Other towns that do movies and have commercial productions and television have legislation," says Pittsburgh City Councilor Darlene Harris, who sponsored the ordinance. "Pittsburgh did not have legislation. Now if we have something on the books, we're not working in the blind."

When Harris first proposed the legislation, in March, it came as a surprise to the Pittsburgh Film Office, which had been working with the mayor's office on setting up new procedures to make the city more film-friendly. Harris' interest in the film industry was spurred while researching another issue.

"This all started out because I'm doing a piece of legislation on construction," says Harris. "We were using construction [permits for] films or doing something different for everyone. Given the fact that we've done all of these productions since 1990, I thought it was time for an ordinance."

Since the initial uncertainty, Pittsburgh Film Office Director Dawn Keezer says she worked with Harris, the Peduto administration and City Council President Bruce Kraus to craft an ordinance that would please everyone involved.

"The one thing we all agree on is it has to keep Pittsburgh as film-friendly as it already is," says Keezer. "There was a real great sense of cooperation on this issue."

Since 1990, the Pittsburgh Film Office has assisted visiting and local filmmakers looking to use Pittsburgh as a shooting location for movie, television and commercial production. The office helps filmmakers coordinate with special events, public works, parking authority and other city offices.

Previously, permits for shooting or obstructing traffic on city streets were issued through the city's traffic division. The process was similar to permitting for construction projects. The new ordinance would place filming under the purview of the office of special events.

"It's never been in law form, and we really just wanted to streamline the process and make it really simple," says Keezer. "We're trying to make this more of a one-stop activity. We don't want to make it more bureaucratic."

That's exactly what worries Joseph G. Bucci, another local filmmaker who is releasing his first film in August and plans to start filming a second in January. As an independent filmmaker, Bucci says he worries the new ordinance will cater more to larger film studios, and make the process of shooting in Pittsburgh more difficult for filmmakers with smaller budgets.

"It directly affects me," Bucci says. "It's been difficult to find a lot of information on [the new ordinance]. They should make information more available to Pittsburgh filmmakers and consult filmmakers on what will help the film community here."

"Often times when you're filmmaking, the need to get a permit or shut down a road is incredibly quick," Cohen says. "In construction, you know that a road needs to be shut down a month in advance. In filming, you could know the night before. You need a process that's quick and affordable. [The new ordinance] seems like it's a step in the right direction."

Despite his optimism, Cohen says that costly permit fees are what has driven filmmakers to search for locations outside of Los Angeles. Permits through Los Angeles' office start at $625.

Harris says the fee structure for permits here is yet to be determined by the mayor's office.

"We haven't seen a fee schedule yet, and everyone has always said that a high permit-fee schedule wasn't something that would be acceptable," says Keezer.

The new ordinance received unanimous preliminary approval from Pittsburgh City Council on July 15 and is expected to be fully approved on July 21.