In the Marcellus Shale Documentary Project, photographers take a nuanced approach to a complex topic

In this photo by Lynn Johnson, Devon Navarro shows his coveralls stained by black fracking chemicals. Navarro, who has a family of six, has since lost his job after a downturn in gas prices.

In the Marcellus Shale Documentary Project exhibition, on display now at Filmmakers Galleries, hangs a picture by Scott Goldsmith, of a train carrying transport pipes for gas drilling; across the river sits Braddock and U.S. Steel's Edgar Thomson Works. Surrounded by images that describe the growth of the Marcellus Shale gas industry and its effects on Pennsylvania communities, this picture makes a visual connection between the region's industrial past and present. Same as it ever was: Industry continues to define our society's growth even as it is defined by the way we think about the short and long term. Industrial practices still shape individual lives in ways both beneficial and harmful, both intentional and unintentional.

The Marcellus Shale Documentary Project is a collaborative effort by six photographers (five of whom live in Pennsylvania) to document the impact of the gas industry in Pennsylvania over the last two years. Curated by Pittsburgh Center for the Arts director Laura Domencic, this powerful and well-conceived exhibition addresses a timely issue with intelligence and honesty, and with an exceptionally high standard of visual storytelling. (Photographs from the project are also available, in different edits, as a book and online.) The exhibition's introductory text notes: "Politically and socially, lines have been drawn. … You are, it seems, either for or against [gas drilling]." To the credit of the photographers and organizers, the project addresses the nuances of a complex situation, taking it far beyond a simple question of "for" or "against." 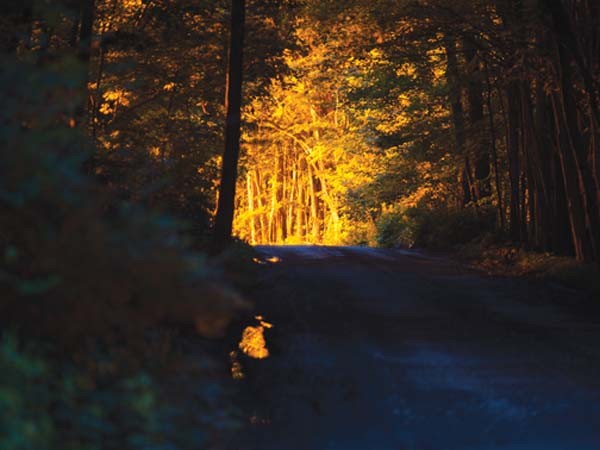 In a photo by Nina Berman, taken in Springville, Susquehanna County, the glow from a methane flare illuminates an otherwise darkened road.

The entrance features photographs by Nina Berman that suggest powerful physical tensions: Methane bubbles through river water, rashes break a child's skin, a protester is compressed against a window. Tap water swirls grey and a methane flare lights the sky orange. The elements are disrupted; what's expected to be naturally clear and clean has been grimly stressed, transformed, unnaturally enlivened. In the midst of it all is a bright picture of a teen-age girl with a soap bubble, just bursting. Her water is contaminated, the caption tells us; the bursting bubble resonates visually with the surrounding distortions.

Brian Cohen's pictures present a different contrast, describing the struggles of families dealing firsthand with the economic and environmental changes brought on by gas drilling. One has been able to save their farm by leasing land for drilling at the cost of broken relationships with their neighbors; another fights illness and contamination. These pictures are juxtaposed with panoramic views of pastoral Western Pennsylvania landscapes, familiar but for the presence of drilling machinery sitting discretely behind trees or over a hill. One rig overlooks Pittsburgh Mills mall in Tarentum.

Goldsmith's wide-ranging exploration gives us a look at the workers and worksites, and lays out the visible aspects of the drilling process, while at the same time offering glimpses into the lives of one family that has been severely affected by drilling. Martha Rial's images position a geographically spreading drilling industry alongside a small family farm, noting the increasing encroachment of the former on the latter, as well as such new phenomena as the growth of woman-owned businesses serving the gas industry.

Just as the gas pipelines radiate outward, so do the social effects of drilling. Lynn Johnson's pictures show how far-reaching the consequences are: Residents of a trailer park deal with eviction after the park is bought by a water-extraction company; an activist minister serves a congregation that includes gas workers and their families; a gas worker loses his job when gas prices fall. The exhibition ends with a series of large prints by Noah Addis, studied pictures of infrastructure alternating with larger-than-life portraits of individuals who suspect that their water was contaminated after drilling took place nearby.

The last picture in the show is Addis' intense portrait of Frank McIntyre. McIntyre was also one of Cohen's subjects, photographed in his kitchen, having retreated to escape a wind that burned his throat. In Addis's photograph, we know McIntyre differently, his enigmatic expression suggesting both accusation and disbelief.

The success of the show is in Domencic's ability to play to the strengths of each photographer's mode of engagement, and in the photographers' willingness to address the complexity of the issues. The overall effect is not of a single, concerted point of view, but rather, of six distinct perspectives, each defining the subject in its own way, and each using pictures and words to stimulate a different kind of knowledge. The resulting examination is a study of how everyday life is transformed under the shadow of the drilling rig.