In the Heights at Pittsburgh CLO 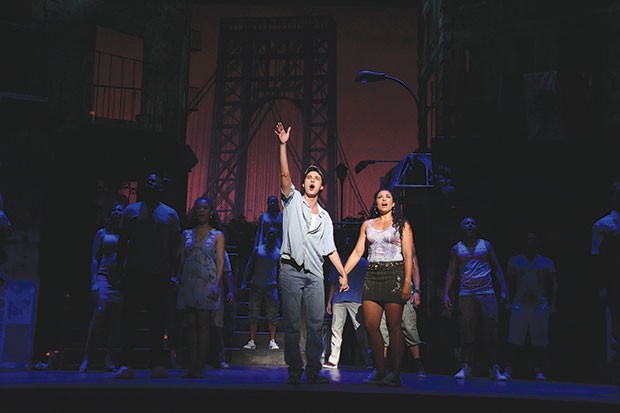 Lin-Manuel Miranda’s In the Heights, now at the Benedum Center courtesy of Pittsburgh CLO, is an easy show to like: How often does Broadway move to rap and salsa, replete with swirling limbs and swiveling torsos that seem to eschew the synchronicity of theatrical dance, but that never once seems sloppy or improvised?

And yet, for Miranda, who would next create Hamilton, this 2005 show is as much a student work as a finished one, a chance for him to try things out. The clichés of story and character pile up quickly in Quiara Alegría Hudes’ book, and when the musical forms aren’t original, they’re really quite dull. Michael Balderrama doesn’t stage the show’s conventional solo ballads and torch songs with even a hint of the energy he brings to the rest of his choreography and direction, let alone the flair we relish in the ensemble pieces.

Miranda’s protagonist and alter ego (or is it id?) is Usnavi (played by Carnegie Mellon grad Joshua Grosso), a young man devoted to the bodega (i.e., mini-mart) on 181st in NYC’s Washington Heights, inherited from his parents. Nearby on the effective set, which makes good use of space, is a car-and-limousine service owned by a Puerto Rican couple whose daughter has just finished a year on scholarship at Stanford — her way out of the ’hood.

Except, it turns out, she didn’t. The scholarship paid only part of her expenses, and she worked so much that she couldn’t study. That, and a boyfriend her father disapproves of (he’s black, not Latino), cues the conflict, one of many we’ve seen before in a story about the dreams of young men and women to move up and out of what they see as their cultural and socio-economic shackles.

The cast performs quite handsomely, when the orchestra and tinny speakers don’t drown them out (I heard others during intermission bemoaning the sound), with Grosso a capable Usnavi, channeling Miranda, who created the role. David Del Rio is playful as Usnavi’s would-be womanizing sidekick cousin, and April Ortiz, as a fiery salon owner, leads the cast in the flashy “Carnaval Del Barrio” number, which is about as memorable as In the Heights gets.