In the Heights at Carrnivale Productions

A talented cast tackles the audacious music and sappy story of this Broadway hit. 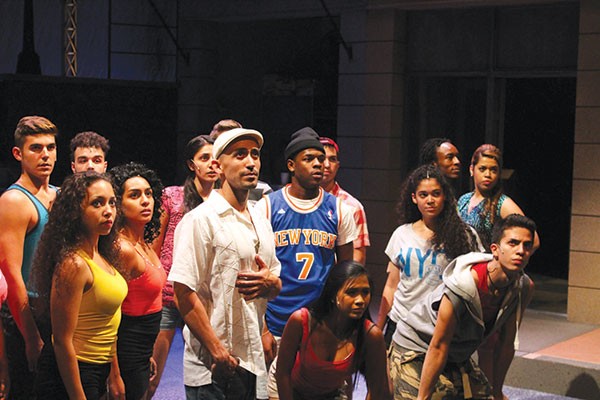 As both a 2008 Tony-winner and Pulitzer finalist for his show In the Heights, composer and lyricist Lin-Manuel Miranda is a hot Broadway property these days. No less than Stephen Sondheim remarked that Miranda's work is "a classic example of the way art moves forward."

In the Heights takes place on a street corner in Washington Heights, the tip of Manhattan and home to a large Dominican population. Over a single, event-filled weekend, we eavesdrop on several neighborhood folks and watch how their lives play out.

Miranda's work, infused with freestyle rap and Latin American rhythms and styles, bounces with fresh artistic audacity. The book, by Quiara Alegría Hudes, is another matter. Overloaded with clichés and overwhelmed by an unremitting sentimentality, In the Heights is definitely one of the sappiest shows I've seen in some time.

But that doesn't bother Carrnivale Productions. This local company stages one show a year and is making In the Heights its 2013 offering, co-presented with Front Porch Theatricals. Why only one a year? Maybe they need time to recuperate. God knows they'll need several months after the massive expenditure of time, money and endurance visible in every second of this production: a cast of 25, an orchestra of 12, a massive set, a mountain of costumes and a show that moves like an express train.

So you may be unsurprised to hear that as of opening weekend, Carrnivale still has a little way to go before it can be said to have successfully landed In the Heights. There's some tentative playing, a lack of cohesion and a boatload of sound issues to be resolved. Director Justin Fortunato and music director Robert Neumeyer have assembled all the parts; they just doesn't feel put together yet.

It's not like they're short of talent. This is a huge cast, but let me mention the principals — Joe Caruncho Jr., Marina Pires, Tony Chiroldes, Tiffany Dissette, Claire Saunders, Phillipe Arroyo and, especially, Truman Verret-Fleming — for their outstanding work.

I've seen what this company did last year with its scalding production of Next to Normal, and there's no doubt that by the time you're reading this, this production will be what everyone wants it to be.