In the Company of Ghosts at New Hazlett Theater

“I find that these ghosts take over and represent me in a new identity in the world.”

IN THE COMPANY OF GHOSTS

Personal stories of life’s trials and triumphs are the foundation for In the Company of Ghosts, a new stage show by Pittsburgh-based multidisciplinary artists Adrienne Wehr and Frank Ferraro, Sept. 22-24 at the New Hazlett Theater.

Ferraro, whose paintings and sculptures have appeared in galleries and publications nationally and internationally, conceived of the work in response to living for the past 15 years with Parkinson’s disease. He says the title “was about walking in the shadow of others because I have no control over what happens with my physical being. Even though I am the same person inside, I find that these ghosts take over and represent me in a new identity in the world.”

In the Company of Ghosts is a 70-minute multimedia production that uses spoken word, singing, original music and soundscapes, movement, installation art and video. Ferraro wrote, produced and performed the show with Wehr, lately best known as producer and actor for the web series Dog Bytes, named one of the “Best Web Series of 2015” at Cannes.

The show is broken into 10 vignettes in which the pair alternates as performers. The idea, says Wehr, is to view personal experiences through a universal lens.

“Beneath the divisiveness in the world, there are stories and experiences that bind us all together as human beings that are the great levelers,” says Wehr. “Sickness is going to hit, death is going to happen, partings take place, triumphs occur, and we all meet these things in different ways.”

Other themes include grief and loss, the healing power of forgiveness, and enslavement to pharmaceuticals.

Ferraro has created numerous stage works over the years, but In the Company of Ghosts marks first time since the onset of his disease that he will perform live. In the past, he has used surrogates to represent him. “It will be sort of crapshoot,” says Ferraro. “It’s an unpredictable disease, so every performance should be different because of fatigue, my ability to speak and dyskinesia [impairment of voluntary movement]. … You get to see me for who I am.”

A YouTube video on its making suggests that In the Company of Ghosts is an early must-see in Pittsburgh’s fall performance season. 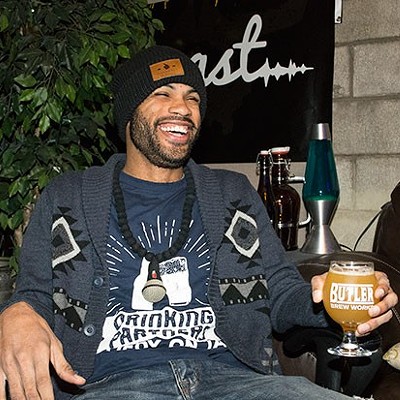