In Pittsburgh, the Steelers-Patriots game is the most anticipated holiday of the month | Sports News | Pittsburgh | Pittsburgh City Paper

Oh, how this town hates Tom Brady so much 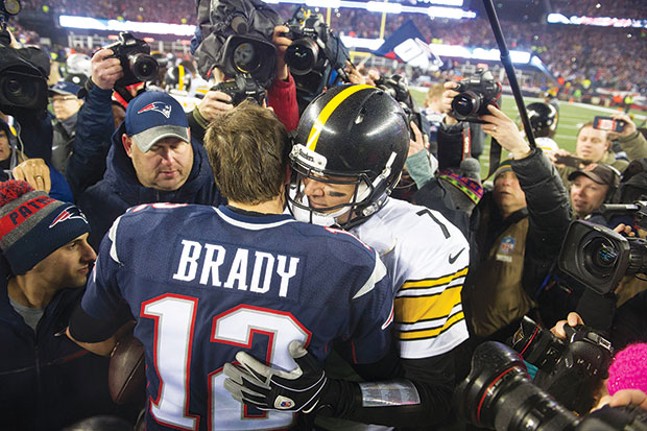 The only date on the December calendar more anticipated than the 25th is Dec. 17. This is the matchup on the Steelers’ schedule that jumped out when it was released last spring. The hated, villainous, treasonous, cheating World Champion New England Patriots come to town for a classic showdown.

These two organizations account for one-third of all AFC Championships. Fifty-one AFC Championship games have taken place, and 17 times either the Steelers or Patriots have been the winner. The Pats have nine to the Steelers’ eight, but Pittsburgh one-ups them in Super Bowl rings by a score of 6-5.

Oh, how this town hates Tom Brady so much. He won’t go away, and he won’t stop winning. Pittsburgh fans owe a debt of gratitude to Eli Manning and the New York Giants, because if it wasn’t for them, the Patriots would have seven Super Bowl victories and an undefeated season (imagine the arrogance level then). They are once again in the hunt and looking to tie the Steelers for all-time Super Bowl supremacy. The battle this Sunday will likely determine the No. 1 seed and home-field advantage for the AFC championship game in January.

Recent history hasn’t been too kind to the black-and-gold. It all started during the 2001 season, when Tom Brady had as many rings as a Cincinnati Bengal. Before 2001, the Steelers had dominated the Pats, winning 12 of 17 contests, which were mostly at Three Rivers Stadium or the Patriots’ old Foxborough digs. Since 2001, the Patriots have won 10 out of 13 contest, including the postseason. It was January 2002 when it all started to change. Drew Bledsoe replaced an injured Tom Brady as the Patriots fought off touchdown scampers from Hall of Famer Jerome Bettis and the unforgettable Amos Zeroue on the way to a 24-17 victory in Pittsburgh. Three years later, the teams met again for the conference championship. Rodney Harrison’s 87-yard pick-six put the Pats up 24-3 and secured the eventual 41-27 win. The hatred for Tom Brady was solidified and permanent as the Patriots went on to beat the Philadelphia Eagles for their third Lombardi in four seasons. It would be 12 years until the two would meet for the right to go to the Super Bowl. In between, the teams met eight times in the regular season, and the Patriots walked off with a win six times.

Oct. 30, 2011, was the last time the Steelers had more points than their rivals when the game was over. Touchdown passes from Ben Roethlisberger to Mewelde Moore and a young Antonio Brown, plus two field goals from Shaun Suisham, led the Steelers to a 25-17 victory. The game culminated with Tom Brady fumbling the ball out of the end zone for a safety as the Heinz faithful finally got to laugh at him. Since then, though, the Steelers have dropped four straight, including the championship game last year.

Heading into week 14, only five teams in the AFC even have a winning record: The Ravens, Titans and Jags are the ones besides the Steelers and Patriots. The first three teams are only a combined 10 games over, while the heavyweights are a combined 20-4. There’s very little reason to believe that any other finale will happen.

On the positive side, the Patriots don’t have a running back as talented as Le’Veon Bell or a receiver even close to Antonio Brown. There probably isn’t another team in the whole league that does. These seats won’t be cheap, as it’s time to ratchet up the hate for the Patriots once again. They probably had something to do with JuJu’s bike being stolen. Now we can hate Rob Gronkowski because he’s a dirty cheap-shot artist. This is a classic battle akin to the 1970s rivalries with the Oakland Raiders and the Houston Oilers. These are the games you’ll see on NFL films years from now. No matter what happens, Patriots coach Bill Belechik will walk off the field dressed frumpily with a scowl on his face. And if things go right this Sunday, the Patriots will be back in January.