In Pittsburgh, athlete-owned restaurants are part of the culture as long as the owner is a fit | Sports News | Pittsburgh | Pittsburgh City Paper

When fans enter a restaurant, they don’t want to hear Jason Kendall scream, “Welcome to Hell.” 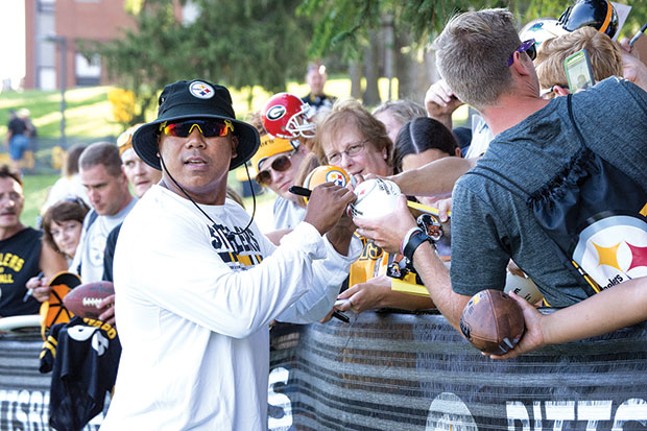 Future NFL Hall of Famer Hines Ward recently had some trouble in his post-gridiron career as a restaurateur.

An employee of his Table 86 Restaurant in Seven Fields, east of Cranberry, allegedly ripped off more than $70,000 in two years from the Super Bowl MVP in a gift-card scam. It’s just another great example why the use of gift cards should probably be scaled back. When someone receives a gift card for a restaurant, it means, “I don’t want to take you out to dinner or actually dine with you, but here’s a $25 down payment to the restaurant of my choice.”

But other than the scam, Table 86 has been getting rave reviews as it approaches its second anniversary. Ward will probably succeed with his venture because he meets the three criteria for an athlete to have a successful restaurant:


Jerome Bettis’ Grille 36 is another great example of a successful joint that gets high marks on all three of the above criteria. Bettis is a top-five rusher, is enshrined in Canton, and is a very likable person. His place is located right near Heinz Field and is a huge draw on game day.

Still, “restaurateur” is not only a stupid word, but is the chosen post-career endeavor for a lot of pro athletes who have too much money sitting around. The restaurant world is hyper-competitive, and many places don’t make it past the first year.

A player’s personality is as important as talent when it comes to whether you want to buy a bacon cheeseburger from him.

James Harrison has had a great career as a Steeler, but probably doesn’t have the personality to greet customers at the door of an eatery. If a customer’s order was wrong, she might be reluctant to send it back beneath the menacing glare of Harrison. On the baseball side of things, former Pirates Brian Giles and Jason Kendall were huge stars, but their previous histories as clubhouse ball-breakers might not fit in well in a consumer-driven industry. When fans enter a restaurant, they don’t want to hear Kendall scream, “Welcome to hell,” a phrase he reportedly yelled at new players.

On the other hand, former Bucco and World Series champion Manny Sanguillen is perfect in this role. Manny’s BBQ is in the best location; it’s behind the centerfield bleachers at PNC Park. Manny is usually there with his gleaming personality, signing autographs and dishing out good food at reasonable prices, especially by ballpark standards.

It doesn’t always work out for athletes. Former Steelers cornerback Rod Woodson is a Hall of Famer who seems very friendly and approachable. Unfortunately, Rod Woodson’s All Star Grill went belly up after just a short run; location was his downfall. What is now a Station Square parking lot was once the site of Woodson’s, and a revolving door of businesses that didn’t make it — The Pittsburgh Sports Garden, Margarita Mama’s and, yes, Philthy McNasty’s. I still can’t believe Philthy McNasty’s folded. A restaurant that sounded like a deviant Irish brothel should’ve been a smash.

The best athlete-owned joint in this city’s history has to be Willie Stargell’s Chicken on the Hill. There’s a chicken-finger stand with the same name at PNC. But the original was in the Hill District, and customers got free chicken, real fried chicken, every time Captain Willie took one deep. Joe Morgan once said of Stargell, “When I played there were 600 ballplayers, and 599 of them loved Willie Stargell.” I suspect the one that didn’t was Keith Hernandez, but that can’t be verified.

Dan Marino and Mike Ditka both have successful restaurants here as well. Marino is an owner of Anthony’s Coal Fired Pizza, with multiple locations across the country. Marino is a good Pittsburgher, a likable guy and an unquestioned great of the game. Ditka is rough around the edges and often says some pretty stupid things when he’s discussing politics. But right or wrong, a lot of Pittsburghers like the guy.

The bottom line is, Pittsburghers love sports so much that they like to be ensconced in it even while they’re eating. So get out and grab a bite, and think about sports while you are eating. It’s a very Pittsburgh thing to do.