In Pennsylvania, people can be jailed for falling back on lease-to-own payments | News | Pittsburgh | Pittsburgh City Paper

In Pennsylvania, people can be jailed for falling back on lease-to-own payments

Stores like Rent-A-Center were recently criticized for predatory practices against low-income and minority shoppers. In Pittsburgh, the stores are virtually only located in poor and Black communities. 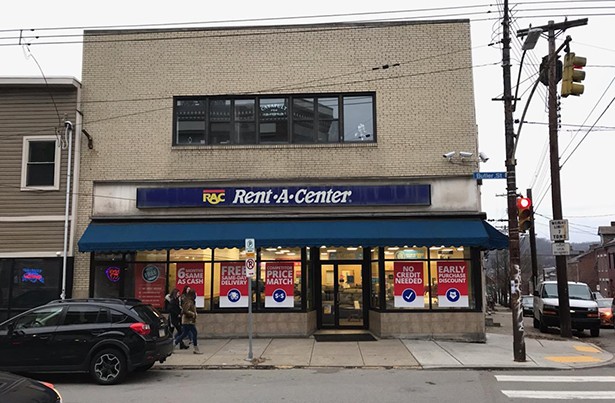 CP photo: Ryan Deto
The Rent-A-Center on Butler Street in Lawrenceville
It’s been a few days since people have gotten to enjoy their Christmas gifts. Holiday deals allow families to purchase toys, televisions, and furniture: the big buys that are typically reserved for the end of the year.

But for low-income families, they may be paying off those gifts for years.

A recent article in the New York Times detailed the practices of lease-to-own stores like Rent-A-Center, and how they can take advantage of low-income customers.

Those tactics are criticized as being predatory, but customers in Pennsylvania have it even worse. According to state law, customers who fall behind on payments to lease-to-own stores can ultimately wind up in jail.

According to the Cumberland County’s The Sentinel, “theft of leased property requires only that a person obtains property through a lease or rental agreement and then intentionally deals with the property as their own.” This means falling back on lease-to-own items like video-game consoles can end up being a criminal offense.

For example, a Cumberland County man who fell behind on payments for a TV actually ended up spending months in prison, according to 2015 court documents.

“Rent-to-own businesses create more problems for consumers than they are worth, charging prices after fees that can be four to five times higher than retail prices,” says Mark Price, labor economist at Harrisburg’s Keystone Research Center. “The rent-to-own businesses model in Pennsylvania is also particularly costly for taxpayers because consumers that fail to pay often end up in our jails.”

One loophole is charging the payments on a credit card, which would mean failing to pay back the credit card, a civil offense.

Even so, Price says the Pennsylvania Auditor General should look into this matter. Price cites regulation of the payday loan industry, and he thinks similar rules could be applied to lease-to-own operations.

Low-income buyers typically fall victim to the lease-to-own scheme. The Times points out this could be because many of these lease-to-own stores are located in low-income and minority neighborhoods, which is the case in Southwestern Pennsylvania.

Allegheny County is home to 10 Rent-A-Center stores. All but one of them are in census tracts that have median household incomes below the county average of $56,333. These include Braddock Hills, Deutschtown, Knoxville, Penn Hills, South Side, Versailles, and Ingram in the West End.

The tract home near the Rent-A-Center in McKees Rocks has a 2017 median household income of just $23,266.

Also, six of Allegheny County’s census tracts with Rent-A-Centers contain larger than average Black populations. This includes a section of Wilkinsburg that is 82 percent Black, with a 2017 median income of just $31,667 a year.

The only Rent-A-Center in Allegheny County in an area with higher than average income and below average minority population is Central Lawrenceville.

Rent-a-Center locations outside of Allegheny County with lower-income areas and larger than average Black populations include Aliquippa in Beaver County, New Kensington in Westmoreland County, and Washington in Washington County.