In Pa., it's legal for medical students to perform pelvic exams on unconscious patients without consent. A new bill aims to change that | News | Pittsburgh | Pittsburgh City Paper 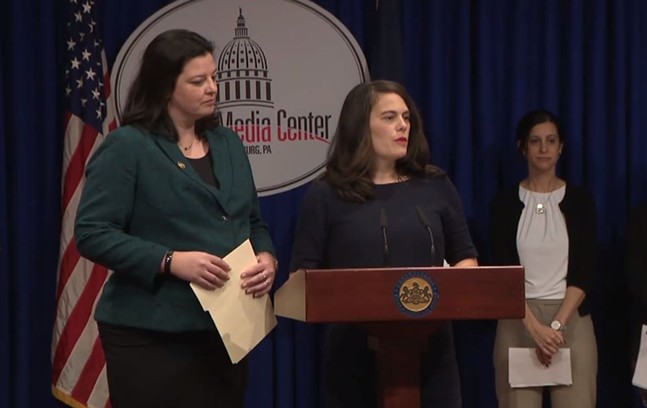 Video screenshot from Rep. Fiedler's Facebook page
In 42 states, it is legal for doctors to allow medical students to perform pelvic exams on unconscious patients without their consent. The practice is done to train students, and not for any medically necessary reason. Two Pennsylvania state representatives, Elizabeth Fiedler (D-Philadelphia County) and Liz Hanbidge (D-Montgomery County) are introducing a bill to ban the practice in Pennsylvania, joining around a dozen other states that have introduced similar legislature recently.

At a press conference on Tuesday, Fiedler and Hanbidge announced plans for legislation, featuring testimony from one of the constituents whose concerns prompted the bill. Keren Sofer contacted her representative when she had concerns after a recent gynecological procedure.

"To this day, I do not know if they examined me or not because I couldn't get a straight answer from my gynecologist when I asked her about it," said Sofer at the press conference.

The same day they announced the bill, the Pennsylvania Capital-Star published an op-ed co-written by Fiedler and Hanbidge titled, "It’s time to end Pa’s outrageous practice of non-consensual, unnecessary pelvic exams." In it, the representatives explain how they each came to learn about the practice, and why they believe it should be banned.

"We believe this common practice is a violation of our bodies and our rights, one that disproportionately, though not exclusively, impacts women," Fiedler and Hanbidge write.

The piece cites a 2003 study published in the American Journal of Obstetrics and Gynecology that found 90% of medical students in Philadelphia said they performed a pelvic exam on an anesthetized patient. A Vice article from June 2019 on the same subject explains that while there were some laws passed or medical school practices changed after the 2003 study, the change has been incremental.

A 2010 study from the Journal of Obstetrics and Gynaecology Canada found that 72% of women expected to be asked for consent before unconscious pelvic exams by medical students; 62% said they would consent if asked.

While this medical school trend seems to be less common than it once was, what is most unsettling to patients and legislators is that a patient might never know if the exam was done.

"We believe that pelvic and rectal exams performed without consent are part of a larger societal problem in which our bodies are not respected," write Fiedler and Hanbidge.

At their press conference, Fiedler and Hanbidge were supported by colleagues from the legislature, including Rep. Sara Innamorato (D-Lawrenceville), as well as Amal Bass, a representative from the Women's Law Project.

Bass called the practice of non-consensual pelvic exams "a remnant of dangerous paternalism in the field of medicine which, like the society in which it functions, has historically devalued the bodily autonomy of women."