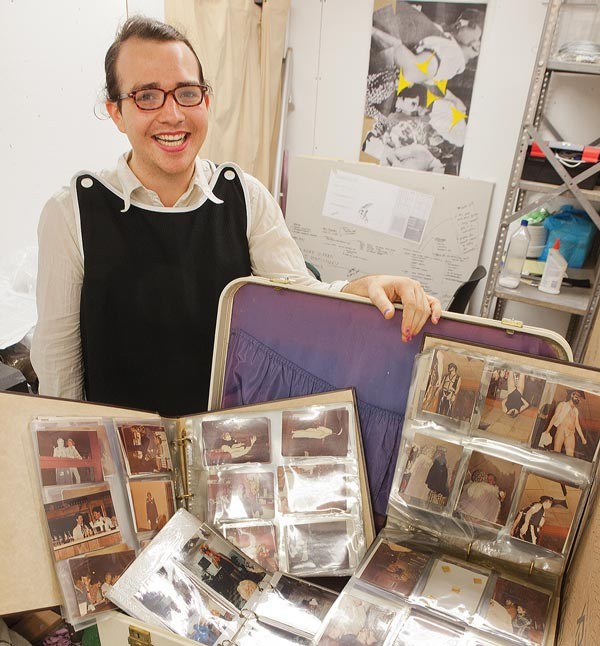 "But the people in this history stay here," Haggerty says. "It provided a new wrinkle in gender-identity politics: You not only had to negotiate your gay identity, but you also had to negotiate your familial identity. For Lucky, the two things worked hand-in-hand. He had these family connections in the world of private clubs and liquor licenses, and he used them to open up these gay social clubs." And that, he says, "became the real engine for the community — which, unlike other large cities, was spread out all over Pittsburgh."

Apple says this exhibit is not the culmination of his research, but just a beginning. Lucky's clubs, he and Haggerty acknowledge, offer a narrative that focuses largely on white, gay men. But they say their research should open up other lines of inquiry, focusing on a range of issues encompassing race and gender.

Apple says Lucky's clubs weren't the first in the city, but they were among the earliest to be owned by a gay proprietor. The clubs that previously made up the scene, he says, were there strictly to make money: "[M]aybe you could find a trick or two, but you don't talk, you don't touch, the drinks were watered down, there's no music and there's certainly no dancing."

The new clubs weren't being run as public trusts, either: "Make no mistake: Profit wasn't the bottom line, it was the only line," Apple says. "But [Johns'] clubs were a little bit funkier; you could let your hairpins down. Here came someone who was a part of this burgeoning after-hours club scene. ... Did he make money? Yes. But he also cared very much for his patrons."

The clubs attracted members for all kinds of reasons. Some were just out for a good time in a place they could be uninhibited. But others used the clubs as a gathering place to talk politics. The leadership of groups like the Persad Center and the Lambda Foundation were born out of meetings at the clubs, and with support from club owners. "These clubs became the center of community organization," Haggerty says. "A lot of the people there became politically active, and when the AIDS epidemic hit, the clubs became crucial for disseminating information."

The clubs themselves could become political causes. In 1988, East Liberty's Travelers club closed after a Valentine's Day raid by state police, who cited it for serving alcohol to minors. Patrons accused police of being abusive and shouting gay slurs; protests ensued, and the club asked a federal judge to bar police from entering the club again. "The purpose of this search was to close down a club catering to homosexuals and to chill and deter the patrons from associating with other homosexuals," their lawsuit alleged, according to a 1988 Pittsburgh Press account. The judge ultimately rejected the suit.

A lot of the material in the exhibit will come from the proprietor himself, who could not be reached for comment. "Lucky was very happy with a camera," Apple explains. "He liked everyone to have their picture taken in the club, which is kind of strange because this is obviously a world going on behind closed doors."

Identifying the subjects in as many pictures as possible was a key part of the curatorial process. The photos — some of which are on display at www.pittsburghqueerhistory.com  — will be used in the exhibit and displayed from a slide projector, just as they were in the clubs themselves. Apple and Haggerty hosted identification sessions with former customers and club employees.

One person who attended those sessions was Douglas Rehrer, a former bartender at area clubs who today works at CMU. Rehrer says he began to work in the clubs while in grad school in the late 1980s, because "my work-study had fallen through." Rehrer says that Apple's research into the era is "extremely important, not just because I was part of it, but so future generations know what it was like, because it was a different world back then."

Rehrer says the photo-identification sessions were both fondly and painfully nostalgic. "It's bittersweet," he says, "to see someone [like] your best friend pop up on that screen, and they're no longer here.  But this is a great project because our memories — good and bad — are all we have."