In its third year, Thrival Innovation + Music festival continues to expand, boasting a new stage in Hazelwood, and headliners Raekwon and Ghostface Killah

“We’ve taken a hard look at how we can be good stewards of Pittsburgh’s innovation story.” 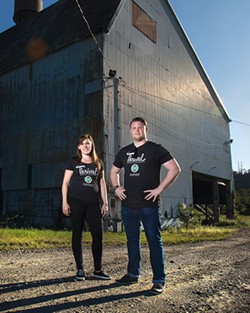 Three Septembers ago, Thrival took over a stretch of land along Penn Avenue where a middle school once stood. The festival site was a raw construction zone, dusty and wild, filled with craft beer, food trucks and a lineup of the kind of hip-hop that suburban white boys are comfortable blasting when they move to liberal-arts dorms in the city.

Across the street from the Nabisco Factory, which is now the Bakery Square development, the school that was once Reizenstein smelled of shortbread and No. 2 pencil erasers — relics of a youth never to be lived by those kids whose parents work and play in the corner of Larimer that’s now nearly nameless as a neighborhood. Is it still Larimer? Shadyside? Close enough to “East Side” to be considered synonymous with that big-box anonymity?

Thrival, a music and innovation festival now in its third year, was created by the Thrill Mill, a startup accelerator once known for its Hustle Den and Baller BBQs.

Now, the Thrill Mill is a little more serious. Its leaders talk about mentorship, strategic partnerships and a “team-centric” philosophy. They’ve brought on full-time staff to focus on Thrival. The event has grown from a one-day festival with four bands to a weekend of nearly 30 acts across two stages, preceded by a week of more than two dozen speakers grouped by themes such as “Creative Reuse, Sustainability & the Arts” and “Health & Wellness Revolution” — “things that play into Pittsburgh’s 21st-century socio-economic resurgence,” says Dan Law, Thrival’s executive producer.

The biggest difference for 2015’s Thrival, says Law, is “scope and substance.” “We’ve taken a hard look at how we can be good stewards of Pittsburgh’s innovation story,” he says.

In its third year, Thrival has become a veritable Rust Belt-revival-scaled SXSW. Festival organizers are expecting upward of 10,000 concert-goers over the course of the weekend, and up to 3,000 attendees at innovation programs.

And after two years at Bakery Square, Thrival is moving.

This year, the music relocates to Hazelwood’s Almono development site, a 178-acre remediated brownfield previously home to the LTV Coke Works, Pittsburgh’s last operating steel-industry plant, which closed in 1998. The largest tract of undeveloped post-industrial property in the city, the riverfront site is set to be transformed into housing, commerce and industry in the coming years — a boon for Hazelwood, where about 25 percent of its 5,000 residents live below the poverty line.

Likewise, this year’s innovation events branch out from the East End to venues in Allentown, the Hill District and the South Side — neighborhoods not necessarily “associated with innovation or entrepreneurship,” says Law.

The first Thrival was conceptualized and executed in just three weeks; this year’s festival has been in the works since the moment last year’s wrapped.

“It’s more than just identifying bands you think are cool. We’re looking at curating a show that the Pittsburgh market can really embrace and support. We turned it from an art form to more of a science,” says Law, who looked to data rather than just intuition to come up with this year’s 26-artist lineup.

This year’s lineup returns to the festival’s hip-hop roots, with strides toward opening the floor to types of artists probably never heard of at a Hustle Den Baller BBQ bro-down.

“We knew last year that the lineup wasn’t as diverse as it needed to be,” says Law. “We’re going to chalk that up to rookie mistakes. But this year we said, ‘Let’s stop this trend.’ One of our big-time goals is that we’ve never had a female headliner, and that’s something Thrival should aspire to do in 2016.”

Wu-Tang Clan’s Raekwon and Ghostface Killah are, of course, the biggest draw, playing prime-time Saturday night. Besides that highlight, go for the synthy female-fronted pop of Cathedrals and VÉRITÉ, who should hold us over until Ryn Weaver or Zella Day decide to grace Pittsburgh with their presence. Oh Honey brings the folky boy-girl harmonies, and San Fermin brings the indie baroque cred. And then there’s Adia Victoria, described by Rolling Stone as “PJ Harvey covering Loretta Lynn at a haunted debutante ball.” She’s released very little beyond her swampy, show-stopping “Stuck in the South” (produced by longtime Yo La Tengo collaborator Roger Moutenot), which is why it’ll be so exciting to hear what she brings to the stage on Friday afternoon.

In addition to music performances, the weekend festival includes 15 food trucks, a “craft beer village,” and hard-hat tours of the former coke-works site that runs along the western portion of the concert site — Pittsburgh’s last smoking furnace, with the power to turn noontime skies to midnight, now an attraction to bide time while the gourmet hot-dog line dies down.