In honor of UPMC CEO Romoff’s retirement, a look back at his loathsome legacy | News | Pittsburgh | Pittsburgh City Paper 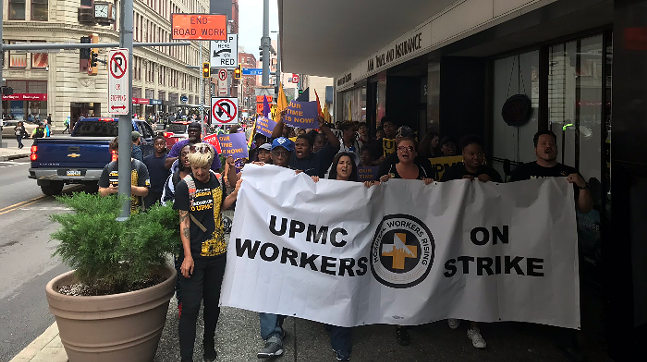 CP photo: Ryan Deto
UPMC workers on a one-day strike in 2018 in Downtown Pittsburgh
On July 28, the CEO of health care monolith UPMC, Jeffrey Romoff, announced he is retiring and will spend the next few months helping UPMC transition its leadership.

Romoff, who is 75, said in a press release that he is “proud to have led UPMC during a time of exceptional growth” and that the company is “now in a well-earned period of stability and success, having overcome challenges and grown into a fully integrated health care system.”

UPMC, which technically operates as a nonprofit and is headquartered in Pittsburgh, has grown exponentially over the years and its financial prowess is undeniable. It is one of the largest employers in Pennsylvania. Allegheny County Executive Rich Fitzgerald said Romoff has been a giant in the health care field, and “the benefits to southwestern Pennsylvania, both economically and medically, have been tremendous under his leadership.”

However, not all leaders see Romoff’s legacy as overwhelmingly positive. Democratic nominee and likely Pittsburgh mayor-elect Ed Gainey, who campaigned on challenging the nonprofit status of UPMC, said the people of Pittsburgh fueled UPMC’s growth through premium payments and tax subsidies and that “our healthcare system should heal, not compound, economic injustices.” State Rep. Dan Frankel said that, under Romoff’s reign, UPMC has used its strength and expertise to extract from the Pittsburgh community.

Pittsburgh City Paper has documented several infractions UPMC has carried out over the years under Romoff’s leadership, which started in 2006. They include closing down community hospitals in hard-hit areas, prioritizing profits over patients and workers, placing employees into medical debt for health care undertaken at its own facilities, union-busting, and skimping on community benefits even as the large landowner doesn’t have to pay property taxes.

Saying that Romoff has been a force and a giant in his field is accurate, but like any giant, the CEO of UPMC has trampled over many other smaller people. Here is just a sample of the controversial decisions UPMC made under Romoff’s leadership.

In January 2009, three years after Romoff took over as CEO, UPMC shut down a program designed to help addicted pregnant women and new mothers struggling with homelessness. The program was small and accommodated five clients at a time, for 90-day stays.

UPMC said at the time that it was cutting the program as a cost-cutting move. At the same time, the health care giant had announced plans to expand and build cancer centers in Europe, the Middle East, and Asia.

Then in October 2009, UPMC announced plans to close down UPMC Braddock entirely, citing million-dollar losses. The closure led to strong community outcry and mentions of UPMC’s other expansion plans.

The Wall Street Journal reported in 2008 that UPMC’s former transplant chief Amadeo Marcos promised to "double the number of liver transplants the hospital did," which resulted in questionable practices like taking more livers from older donors and transplanting them into relatively healthy patients. He also used partial livers from living donors and then understated complications related to the transplants.

Marcos left UPMC shortly before a Pittsburgh Tribune-Review investigation was published about the controversial transplant practice.

Marcos' predecessor, Dr. John Fung, told WSJ that he couldn't square his own ethics with what was going on at UPMC. According to WSJ, Marcos and Romoff "saw eye-to-eye on volume and profit."

Union busted at every turn

Despite record profits, aggressive expansion plans, and massive investments in new facilities, UPMC under Romoff has done everything in its power, sometimes violating labor laws, to stop unionization efforts among workers at its many hospitals.

Workers at UPMC hospitals across the region have been trying to form labor unions for nearly a decade.

In 2013, UPMC reinstated two workers it fired for union-organizing after complaints were filed to the National Labor Relations Board. Firing employees for labor organizing violates federal law. That same year, UPMC settled a complaint with labor union SEIU Healthcare over 80 charges of unfair labor practices.

According to a 2014 NLRB decision, UPMC engaged in “unfair labor practices,” such as threats of poor evaluations for those engaged in union activities, and banning employees from wearing union insignia. UPMC also created an “illegal company union” called the Environmental Support Services Employee Council (ESS) as a means to undermine legitimate union activity.

In July 2020, UPMC claimed that Western Pennsylvania was seeing a strain of COVID-19 “that seems to transmit easier but is less deadly.” A week later Spotlight PA found that UPMC’s claim lacked sufficient research.

Spotlight PA spoke with several virologists and epidemiologists and concluded that the claim of a "less deadly" strain "is not supported by current research." They also spoke with a UPMC official who cited scientific studies that contradicted the claim.

This came at the same time as UPMC defying orders to stop carrying out elective procedures. An open letter from nearly 300 staff members implored the hospital system to stop elective procedures as COVID-19 cases started to spike in July, with cases in early July averaging around 200 daily cases in Allegheny County.

According to Nila Payton, a longtime UPMC employee, workers at the hospital system get locked into what she described as unfair UPMC health insurance plans and then are straddled with medical debt from their own employer. UPMC has its own health insurance company.

“Many of my coworkers, none of which make a living, let alone thriving wage, are also in debt to UPMC, due to skyrocketing health-care prices and predatory clauses in their insurance,” said Payton in an interview with City Paper in 2019.

Payton says the insurance plans for employees have high co-pays and deductibles, resulting in many UPMC workers incurring thousands of dollars of medical debt to UPMC.

Leslie Poston, breast cancer survivor and administrative assistant at UPMC Presbyterian, told WESA that her medical bills are so high, she can no longer go to the oncologist. She says this was especially frightening because she didn’t know if her cancer might return.

This all came before UPMC’s plan to raise its minimum wage to $15 an hour. It also came as UPMC continues to avoid paying property taxes on the several valuable plots it owns in Pittsburgh and throughout Allegheny County.

UPMC has contributed to Pittsburgh’s OnePGH plan with funds to help create a new homeless shelter Downtown, but critics have pointed out that those payments are tiny compared to the property taxes they would be paying if they were not exempt.

Likely incoming Pittsburgh Mayor Ed Gainey has vowed to challenge the tax-exempt status of UPMC in hopes of getting the hospital system and other large nonprofits to pay property taxes.