These riffs on the theme are diverse and intriguing, ranging from the literal to the obscure 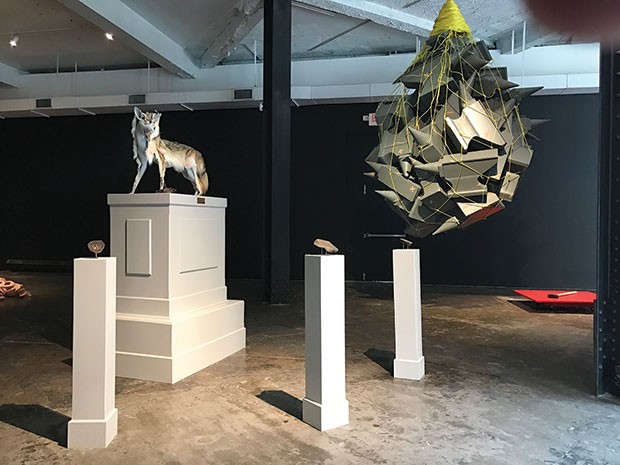 For Checks & Balances, now at SPACE gallery, curator Murray Horne gathers work from a half-dozen Pitttsburgh sculptors exploring the idea of duality. It’s an expansive playing field, and most of the artists drive the concept forward with focus.

These riffs on the theme are diverse and intriguing, ranging from the literal to the obscure. For instance, in Paul Bowden’s contribution, the interpretation is immediately obvious. He offers two pairs of matching all-white male nudes, doll-like in scale. One duo stands atop their pedestal shoulder to shoulder while the other pair stands back to back. There is no dearth of clarity here; we see physical proximity in both cases. What’s interesting is that in the face-to-face representation there is no connection between the two, whereas in the back-to-back stance the implied bonding against a common enemy seems strong.

More often, the theme is a bit further below the surface. Shaun Slifer stuns with “Shapeshifter, canis latrans” and “Between Dog & Wolf,” two works incorporating paw prints and a taxidermist’s mannequin draped in a coyote pelt, the latter figure on a especially high pedestal. The result is a gorgeous, if chilling, meditation on the wild, the tamed, and how thin the line between the two can be. It’s telling that the pose chosen for the undomesticated creature — mouth open, teeth ready — is not necessarily representative of how that creature exists independent of the intrusion of man. Go home and hug your dog, and understand that while he does not mind donning a sweater, and may in fact enjoy it, he’s still ready to eviscerate a rabbit if the opportunity arises.

“This Is Revolting,” by Jasen Bernthisel, takes objects fraught with the potential for destruction and subtly reveals their vulnerability with a tiny, yet weighty, alteration. A net suspending a few dozen anvils, straight out of the Acme catalog by way of Warner Bros., is formidable and perilous. But each anvil is patched with a standard-sized band-aid, covering, one assumes, something that hurts. The action that has transformed them is small, the result booming. As far as being revolting, the same can be said of Brandon Boum’s “Ter.ra.roam.” To be delicate, it shows matter at what appears to be different stages and is extremely evocative of the digestive process.

Jill Larson’s “Bittersweet” is the Work Most Likely To Be Transformed. Its framework is a fairly standard sleeping setup: wooden headboard at the top, carved with a curlicue or two but nothing flamboyant or garish, matched at the foot of the bed with a smaller version of the same. Aside from the flatness of the paint job, there’s nothing here of note. But the space between is enthralling. Where you would expect to find a Sealy Posturepedic or, if you got really crazy, a Dial-By-Numbers system, you instead discover a bed of nails, hundreds of miniature spears lined barbs-up, sharp and spiked and impaling. But for one thing: Every prong has had its edge taken off, literally, by sweetness, also literally. Atop each skewer is a Kiss, the Hershey’s kind, foil-wrapped and waiting; a note from the artist instructs patrons to help themselves to one piece. It will be interesting to see whether throughout the course of the exhibition the candies will be replaced, or whether the swords they sheath will be left bare. Whether concluding with a trick or treat, the point, as it were, seems clear — in pursuing a little bit of sugar, you’re exposing something harmful.

The work dominating the gallery’s square footage is Sarika Goulatia’s “The Trivial Pursuit of the Superfluous.” A jim-jam of found objects, predominantly white-washed — bicycle wheels, car parts, roofing materials — are all crammed into a corner section of their own. Much of the rescued detritus is overhead, suspended and secure but still a little scary, and visitors are welcome to walk through the installation on what seems a perilous path, bravely tiptoeing through the passageways. Within is a single garment hung spare and clean but festooned with pins, a collaborative effort with Rita Malik, Maanya Goulatia and Eshaan Goulatia. (The pinned white shirt echoes some of Goulatia’s pieces at her recently closed Emerging Artist of the Year show at Pittsburgh Center for the Arts.) It’s difficult to interpret what exactly “Trivial Pursuit” signifies, though: While the objects that fill the junkyard like construction debris are interesting to look at, and there’s plenty of them to catch and occupy the eye, we’re not sure where else it’s going.

All in all, though, the varied works roundly succeed in engagement, sometimes going so far as entrancement.