In a Bind: Arbitration gives officers a method of fighting termination, but what recourse does the public have when they're rehired? | News | Pittsburgh | Pittsburgh City Paper

In a Bind: Arbitration gives officers a method of fighting termination, but what recourse does the public have when they're rehired?

"By the time the process is over, no one is disciplined unless they're sitting in jail." 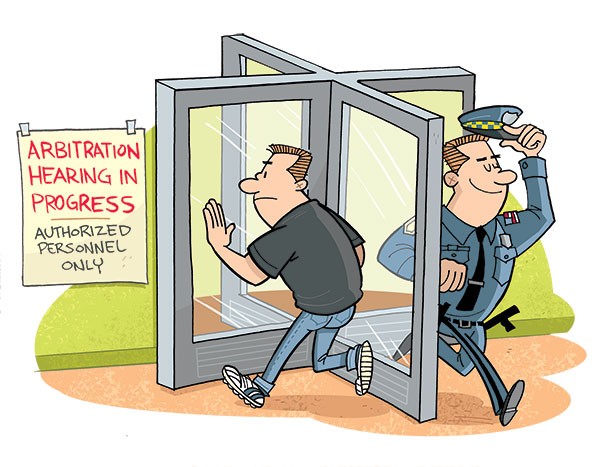 In June 2008, after downing six drinks as part of his wife's birthday celebration on the South Side, Paul Abel was accused of accidentally shooting a 20-year-old man he was trying to pistol-whip.

In December 2009, Eugene Hlavac was accused of slapping his ex-girlfriend (and his son's mother) so hard that he dislocated her jaw.

And in November 2010, Garrett Brown was accused of running two delivery-truck drivers off the road in a fit of rage — an allegation similar to those made against Brown in at least one other late-night traffic encounter.

Each of these men, who were all Pittsburgh Police officers at the time of the incidents, shares a common experience: They all were fired, charged criminally, cleared of those charges ... and then got their jobs back through arbitration.

And they're not alone. Nine officers were fired by the city between 2009 and 2013, but five of those terminations were overturned by an arbitrator, according to Pittsburgh Public Safety Director Mike Huss. (In all, says Huss, the city filed 269 disciplinary-action reports in that period, 33 of which involved suspensions.) In the cases where terminations were appealed by the police union through arbitration, officers got their jobs back close to 70 percent of the time, according to figures provided by Huss.

"We have seen egregious misconduct," says Vic Walczak, the Pennsylvania American Civil Liberties Union's legal director. "By the time the process is over, no one is disciplined unless they're sitting in jail."

Since public-safety unions can't strike, arbitration plays a central role in settling disputes with management. Under the city's contract with the Fraternal Order of Police (the police union), officers have the right to appeal discipline imposed by the city through an arbitration process. A panel, usually comprised of one representative each from the city, the union and a third "neutral" arbitrator, decides whether the city's decision was justified.

Police unions are successful in overturning about 62 percent of disciplinary decisions nationwide, according to Will Aitchison, director of Labor Relations Information System, an organization that tracks trends in public-sector unions and holds police discipline seminars.

But if the neutral arbitrator is indeed neutral, why do police unions have so much success reversing terminations? There's no simple answer to that question, and it divides city and union officials.

Is it because police unions cherry-pick their cases, only appealing terminations for disciplinary issues that clearly warrant some lesser punishment? Or do arbitrators skew their findings in hopes that favorable rulings will encourage the union to challenge decisions more often? Such questions are hard to resolve, in part because the opinions arbitrators write to justify their findings are not considered public under state law. And that, some experts suggest, both undermines public confidence in the police force and helps keep troubled officers on the streets.

Public Safety Director Huss — who held the position during the Hlavac, Brown and Abel cases — says one of the most frustrating parts of the job has been an inability to keep officers he thinks are unfit off the force.

"The city needs the ability to terminate officers," Huss says. "Why would you employ a police officer that pistol-whipped and accidentally shot someone on his night off? The common person says, ‘This is crazy.' And they're right: It is crazy. It's just never gotten enough attention."

Huss argues one reason arbitrators rule in favor of the FOP is because they know there won't be blowback. "These arbitrators aren't accountable," he says. "They never have to give an interview; they never have to answer in the form of an election. They're kind of hidden; no one even knows their names."

What's more, arbitrators don't want to ruin the livelihoods of police officers, Huss says. If an arbitrator upholds a termination, it is next to impossible for the officer to land another law-enforcement job.

Huss also argues a slightly more cynical position: that arbitrators have a financial incentive to side with the union. Since grievances are initiated by the union, if arbitrators start siding with cities, there might be fewer cases to hear — and less money to be made.

Bryan Campbell, a veteran lawyer for the Pittsburgh's chapter of the Fraternal Order of Police who has handled numerous arbitration cases, has a different take. He argues the city often overreaches when disciplining officers — especially when the allegations are sensationalized in the media.

In the cases the FOP appeals, Campbell says, "we have a basis to say that either there should be no discipline, or if there should, it should be short of firing. The idea of discipline isn't to punish people; it's to make you a better employee." And, Campbell adds, since personnel issues are often in play at arbitration hearings, it wouldn't be appropriate to make them open to the public.

Abel has been widely held up as an example of an officer who shouldn't have gotten his job back, but Campbell says the picture is more complicated. Though Abel was off duty when he shot someone on the street, Campbell explains, he was sucker-punched and was only trying to arrest the culprit. It just didn't turn out to be the guy he shot.

"All he was trying to do is arrest somebody who was guilty of an assault," Campbell says, although he adds, "Should he have taken his gun out in those circumstances? Probably not."

In an effort to gauge the outcomes of arbitration, City Paper filed a right-to-know request for the last 12 years of arbitration records from the city. The documents provided in response, which covered awards in 54 cases, didn't just fail to explain how arbitrators arrived at their decisions. They often failed to answer even the most basic questions about what the cases involved.

The identity of the officers involved is often difficult or impossible to determine, as is the issue under discussion. That makes it impossible to determine how often cases concerned discipline, as opposed to "interest" arbitration — cases in which the dispute involves contract provisions like time off or benefits. It's unclear what kind of discipline was being imposed, how often the FOP was able to overturn it, or what rationale led to the decision.

Some cases appeared to be missing entirely, a matter the law department has said is "under legal review" — though months later, it still hadn't offered an explanation.

One of the longest-serving chiefs in recent Pittsburgh police history, Robert McNeilly, knows the ins and outs of arbitration. During his 10-year stint as chief of the Pittsburgh Police, he frequently sparred with the FOP, fired an unprecedented number of officers, and earned a vote of no-confidence from the union.

McNeilly says that even though some arbitrators make "excellent decisions," the opacity of the process undermines public confidence in policing.

"Every single case should be tracked: what the chief decided, what the public-safety director decided, what the arbitrator decided [...] the final decision should be public," says McNeilly, now chief of the Elizabeth Township police. "[Officers] do some really bad things and they get away with it; it's little wonder the public loses faith."

"We give a lot of credit to Chief McNeilly to improving the professionalism and accountability in that department," says the ACLU's Walczak. "He was reviled by the union precisely because he was that kind of disciplinarian."

Chuck Bosetti, who held FOP leadership positions during McNeilly's reign, was one of those revilers. Bosetti stresses arbitration isn't to blame for all police discipline issues: "[The media] create the image that arbitration is all about putting bad cops back to work," he says. "A lot of the coverage has blindly excused everybody above the rank of lieutenant," meaning that poor discipline often comes from lax standards at the highest levels within the police bureau.

During his tenure as chief, McNeilly estimates about two-thirds of the officers fired under his watch got their jobs back — and he echoed Huss' point that arbitrators want to rule in favor of unions because they have an interest in getting more arbitration cases.

But arbitrator Michael Zobrak, says that notion is "pure baloney."

"I don't know any good arbitrator who keeps score," says Zobrak, who has served as a "neutral" on several panels — including panels that reviewed terminations of Pittsburgh Police officers. "The idea that we make money so we rule in one way or the other is just ridiculous."

Asked whether making the proceedings more transparent would assuage public concerns about the outcome, Zobrak says that's not his place to decide: It's a matter of state law, and the particulars of the contract between the city and FOP.

"We have access to all the information during the course of the hearing. I understand there are situations that on the surface appear to be very egregious. But we balance the facts. What you don't hear about are the cases where the firing is sustained. You only get really about half the story."

On that much, at least, parties on both sides can agree.

Bosetti, for one, argues that when an officer is facing termination or felony charges, hearing transcripts should be publicly available after an arbitrator or judge makes a ruling. Walczak, too, supports a more open process.

"These are public officials who have the ability to take away your liberty or even your life in some circumstances," he says. "So what happens to them is of utmost public interest."

As it stands, though, the parties involved in arbitration cases often don't talk. The police contract does not permit the city to "divulge the reasons for any disciplinary action that is not appealed beyond arbitration."

City Solicitor Lourdes Sanchez-Ridge says there's no law requiring the city to turn over anything more than a piece of paper that says whether a particular grievance was sustained or denied. The city is not even required to specify what the grievance was for.

Sanchez-Ridge says it can be tricky to predict how a particular arbitrator will rule and has asked for a review of the city's arbitration cases. "It's not like a litigation case where there's usually a whole bunch of research and case law on the topic," she says. "It's usually how the arbitrator interprets the law or the contract."

Asked whether the process should be more open, Sanchez-Ridge says, "Obviously the more open a procedure, the more everybody is held accountable. On the other hand, you're dealing with personnel issues that shouldn't be public."

For his part, Mayor Bill Peduto has signaled the importance of police discipline as the FOP's contract with the city expires this year. At a press conference held March 13 — the day an arbitrator reversed the city's residency requirement for police officers — Peduto said: "My biggest concern with our police isn't where they sleep at night but that we have a very professional police bureau. [...] I should have the power to fire [officers] [...] Those are things that could be negotiated in collective bargaining."

"The FOP negotiations are coming up very soon," labor lawyer Mike Healey adds. "And it's going to be a very big issue."