With virtually no preparation, performers devise musicals on the spot using only a basic prompt 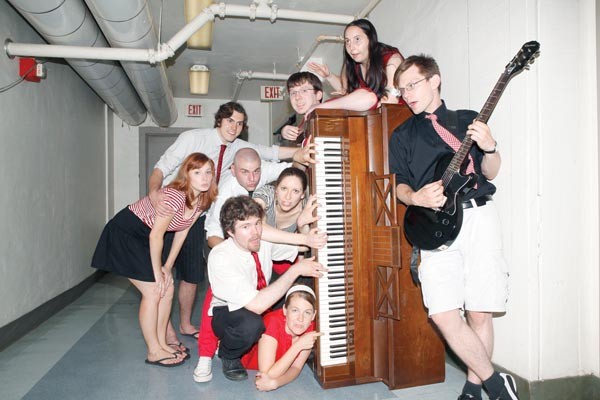 At Downtown's CLO Cabaret, in June, a performer with improv group Wunderstudies strode onstage, surveyed the packed theater and asked for a prompt.

"The dream she never dreamed!" someone immediately screamed.

"The dream she never dreamed," he repeated. A pianist left of stage struck a chord, six Wunderstudies actors assembled in a circle and, within seconds, a song called "Dream Masters" was in full swing. By the second scene, several characters had introduced themselves. By the third, a conflict was brewing. And within an hour the story — centered on a sleep fairy (Ayne Terceira) who afflicts a city block with nightmares after one of its residents rejects her — had concluded without any major plot points unresolved.

If this sounds improbable, you probably haven't seen much improv recently. Over the past year or so, four local groups — first Wunderstudies, then the Nebby Spectres, The LuPones and Project Improv Experience — have introduced a twist to the city's traditional, dialogue-intensive format. Every month, with virtually no preparation save their improv exercises, the performers devise musicals on the spot using only a basic prompt.

"In your average improv show, you're watching a lot of people talk and mime," says Brian Gray, director of Project Improv Experience (formerly known as the Wandering Minstrels). "There's so many different things we can do with the music."

No two groups' approach to the genre is quite the same. The members of Project Improv Experience use images projected onto a screen to furnish their ideas; the Nebby Spectres (an offshoot of Wunderstudies) perform exclusively gothic-themed plays. Each group, however, adheres to a few rules that ensure that its act remains lively and unpredictable. They use no predetermined song structures; the performers must adapt to their fellow singers' harmonies on the spot. No one is designated a particular scene or moment in which they're expected to speak. Accordingly, actors must possess impeccable timing, a keen understanding of how musical narratives work, and a sixth sense for when to talk and when to remain silent.

Sometimes the prompts themselves — which have included Polyamorous: The Musical and Dolphins and Poodles — present the biggest challenges. But as improv veteran and Wunderstudies director Brett Bavar notes, this is part of the fun.

"If someone suggests Poop: The Musical, you can totally turn that around," he says. "Maybe we are sewage workers, and we just have a really interesting, complex series of events and relationships among people who work in the sewers."

The members of these groups generally don't attribute the recent proliferation of improv musicals to any single trend — the genre is already well established in cities like New York and Chicago, and the city's improv scene has been expanding for a long time. Nearly every member I spoke to, however, credited one organization, Steel City Improv Theater (SCIT), with helping boost the scene's visibility and popularity. Opened in 2011, North Side-based SCIT hosts a variety of acts, both musical and non-musical, and offers classes for aspiring actors, many of whom go on to perform in various groups around the city.

"Steel City Improv Theater really views itself as a community," says LuPones member Connor McCanlus. "The more musical improv coming out of SCIT, the better it is for everyone."

If recent bookings are any indication, SCIT's efforts have paid off. Recently, some of the aforementioned groups have even performed outside the state. In March, Wunderstudies performed alongside New York-based troupe Broadway's Next Hit Musical in the New York City Improv Festival. In June, The LuPones played a coveted 9:30 p.m. slot in the Del Close Marathon, a well-known event in the same location.

Fawad Siddiqui, a Wunderstudies member and Second City alumnus, says that witnessing the growth of Pittsburgh's improv scene has been "wonderful." Siddiqui joined a house team at SCIT in 2011, and has since performed in several local groups.

Asked to identify the most rewarding aspect of the genre, many performers responded similarly.

"When something goes completely right, and it looks so good that it's scripted," says Kasey Daley, a musical theater-trained LuPones member who co-founded SCIT and serves as its artistic director. "That's the most amazing thing to me."

Bavar puts it more bluntly: "I love it when people think there's no way it could've been improvised, because that means we've done our job well."