Impressions to the contrary, comedian Jim Norton does censor himself occasionally.

Watching Jim Norton's standup comedy is kind of like watching your buddy get kicked in the groin: You cringe, but it's absolutely hilarious. Fans of raunchy humor about everything from AIDS to feces can see Norton in Pittsburgh on Fri., May 2. Norton tours nationally and is a fixture on the Opie & Anthony radio show. Like his HBO special, Monster Rain, his first book, the 2007 best-seller Happy Endings: The Tales of a Meaty-Breasted Zilch, reveals his most personal thoughts on life as a child, life on the road ... and life in the sack with prostitutes. Norton spoke with City Paper from his home in New York.

With Happy Endings, did you fear seeing your thoughts in print?
Not really, because I was so used to saying them on stage that seeing them in print, I'm like, "How much worse could it be?" And, of course, I realize it's monumentally worse.

Did you fear what others would think?
Nah, I could care less. I've had enough of being judged by phonies in the audience who want to pretend that they have higher morals. Meanwhile, they're pumpin' liquor down their date's throat so they can sleep with her.

Have you ever locked eyes with, say, a 65-year-old woman when telling some of your more disgusting jokes?
Yeah, but it's not necessarily the older people that have a problem. The younger people are much more sensitive because they haven't lived at all. A lot of time they're just dummies who think they know how they're supposed to react, and they're using a phony sensitivity.

Upon launching your career, did you ever think, "My mom is going to hear this"?
I did, actually. And [my parents] are probably happy that my career is going well, and I'm sure at the same time they're ashamed that I'm such a fuckin' bag of filth.

Have you ever censored yourself on stage?
Absolutely. We have to use common sense as comedians. Just because I don't care about people's morality doesn't mean I'm purposefully cruel. If something is going to be particularly barbaric to somebody who is right there, I'll back off. It's just a judgment call you make as a professional.

Once, after a horrible set early in your career, your friend Bob Levy followed you onstage and reworded a joke so it wouldn't seem like a jab at your performance. What did that mean to you?
It made me feel bad that he had to [change his joke], like, "What a loser I am." But it also made me feel good that a comic I admired was being gentle with me like that. I understood what he was doing at that moment, and I think that's why it moved me.

You call yourself a "fat-titted nothing" in your book. Do you still see yourself that way despite your success?
Not as much of a nothing, but I still am fat-titted. My body image has nothing to do with where my career is. I've been working out a lot, but I'm still a mush. It's depressing. My girlfriend says, "Why do you say that about yourself?" and I say, "Feel my tits." I literally have B-cups.

In the book you describe the greatest moment of your life ...
[Laughing] When [fellow comedian Bob] Kelly smelled my bellybutton?

How does that outrank meeting Richard Pryor and Sam Kinison?
A lot of people met Pryor and Kinison, but no one has ever made Bob Kelly puke with their bellybutton. That was the beauty of that moment. It just made me feel so good about life. ... Picture farting and one of your friends vomits. Could you picture anything that would make you happier? 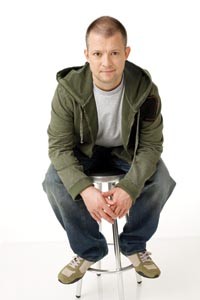 Photo courtesy of Visko Hatfield/HBO.
"Picture farting and one of your friends vomits." Jim Norton can.