Immigrant-rights advocates call on Colcom to drop anti-immigrant funding, and for local groups to stop taking its money 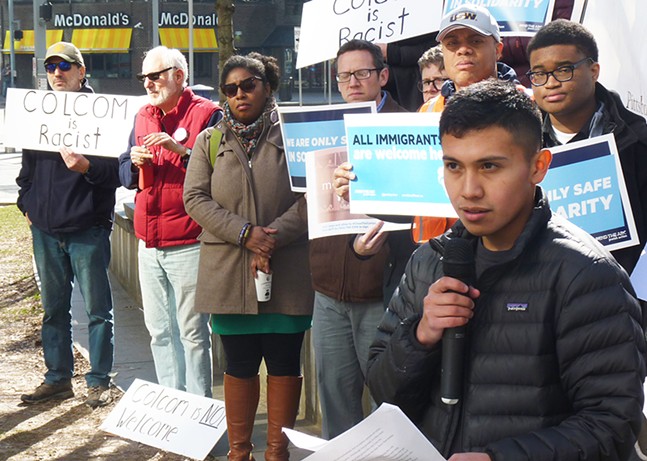 CP photo: Ryan Deto
Benjamin Gutschow speaking at the rally in Downtown Pittsburgh
A group of more than 30 advocates met Downtown today to denounce the Colcom Foundation and its funding of anti-immigrant groups, some that have been deemed hate groups by the Southern Poverty Law Center.

Colcom is an organization based in Pittsburgh and started by Mellon bank heiress Cordelia Scaife May. Last year, the New York Times documented May’s deep ties to white nationalism and her work in funding and boosting the modern-day anti-immigrant movement. Since 2005, Colcom has given more than $150 million to anti-immigrant groups, as well as a much smaller figure donated to Pittsburgh-area environmental nonprofits and other groups.

Guillermo Perez, head of the Pittsburgh chapter of the Labor Council for Latin American Advancement, spoke at the rally and denounced Colcom’s donations, particularly to groups like the Federation for American Immigration Reform (FAIR) and the Center for Immigration Studies (CIS), whose messaging has been repeated by white nationalists as well as White House aide Stephen Miller.

“These institutions must stop their association with Colcom or it will define who they are,” said Perez. “Join us in pressuring Colcom to stop funding the hatred that’s terrifying whole communities and resulting in deaths and family separations, not only at the border, but across the country.”

Colcom vice president John Rohe shared his response to Perez with Pittsburgh City Paper, after Perez contacted him about the advocates’ demonstration. Rohe wrote that Colcom shares many objectives with the advocates.

“Colcom categorically rejects intolerance, racism, and anti-immigrant sentiment,” wrote Rohe. “It refuses to fund groups promulgating such activities. The Foundation supports public education on a long term sustainable level of immigration. This conversation should never be marred by racial bias. The starting point is to respect all people.”

Colcom gives the largest section of its donations to FAIR. Last year, FAIR ran ads on social media targeting U.S. Rep. Conor Lamb (D-Mt. Lebanon) claiming he voted “to give amnesty to MILLIONS of illegal aliens,” after Lamb voted for the DREAM Act, which would provide a path to citizenship for immigrants who qualify for the Deferred Action on Childhood Arrivals (DACA) program. The majority of Americans support providing a path to citizenship to DACA recipients, the majority of whom are Latino.

Last August, a wealth management firm that worked with Colcom dropped them as a client saying that "several of [Colcom's] policies are inconsistent with our views on diversity, equity, and inclusion."

During the rally, environmental organizer and Guatemalan immigrant Benjamin Gutschow said he recently learned about Colcom’s role in donating millions to anti-immigrant groups, and he said that speaking today terrified him. He has organized with youth climate group Friday's For Future.

“I have spoken at strikes, worked with politicians, and lobbied to foreign ambassadors. Yet today has terrified me the most,” said Gutschow, whose adoptive parents live in Pittsburgh. “I am afraid to speak for my own safety. I am afraid that after today, I will be a target. I am afraid that my existence will be stopped.”

Gutschow said donations Colcom's financial support of environmental groups has had benefits, but that they don't outweigh the damage done by the group's anti-immigrant beneficiaries.

“I cannot say that they've only done bad; planting trees, providing crucial funds, and promoting a positive quality of life, I consider good things,” said Gutschow. “But if we must compromise our values to allow discrimination, there should be no such place for this foundation here in Pittsburgh.”

Dan Galvin of local group Veterans for Peace called out Colcom for spreading misleading rhetoric about “overpopulation” and its effects on America’s environmental problems. The U.S. has a number of very large states with very few people. Montana, for example, only has about seven residents per square mile. The city of Pittsburgh currently has 5,460 people per square mile and used to have twice that. The current U.S. population is around 327 million, but if it was populated as densely as Europe, the country's population would be around 1 billion.

Perez said at the rally that arguments about “overpopulation” and anti-immigrant rhetoric have been cited as motivations to carry out mass shootings in Pittsburgh and El Paso. Galvin also called on Colcom to stop its donations to anti-immigrant groups and for local groups to stop associating with Colcom.

Krystle Knight of the Thomas Merton Center highlighted Trump and his administration's frequent attacks on immigrants and restrictive immigration policies since he came into office in 2017. According to public tax documents, the Colcom Foundation nearly doubled its donations to anti-immigrant groups from 2016 to 2017. Colcom gave more than $34 million to anti-immigrant groups in 2017.

Knight said it's important for local groups to reject Colcom’s funding. She said local group funding is meant to “distract from the reality that they are funding dangerous white nationalism groups.”

“We know the dangers of masking hate as science,” said Oren. “As Pittsburgh Jews, we know the funding of anti-immigrant groups endangers us too.”

In 2018 at the Tree of Life synagogue in Squirrel Hill, 11 congregants were shot and killed by a mass shooter. The alleged shooter, Robert Bowers, espoused many anti-immigrant sentiments on social media shortly before the shooting took place.

Perez said the advocates will be sending letters to local groups that receive money from Colcom, asking them to join them in the campaign to reject funding and denounce Colcom. He said advocates will continue to pressure groups.

"If they don’t want to wake up to what Colcom is, then we will call them out,” said Perez.

According to Colcom’s website, there are 61 organizations that received more than $50,000 each in 2019, including dozens of Pittsburgh and Pennsylvania groups that don't advocate anti-immigrant messaging.

The full list of organizations receiving donations from Colcom for the fiscal year ending June 2019 is shown below:

(After this story was published, American Rivers informed CP that ended its relationship with Colcom last year and will not seek funding from them moving forward. “American Rivers decided in September 2019 to conclude our relationship with the Colcom and Laurel foundations,” says American Rivers spokesperson Amy Souers Kober, also noting May’s other, smaller foundation the Laurel Foundation. “We continue our river conservation work in Pennsylvania and are committed to advancing the values of diversity, equity, and inclusion in the region and nationwide.”)

(After this story was published, GASP informed CP that ended its relationship with Colcom last year and will not seek funding from them moving forward. “Although GASP does not work on immigration issues per se, we take the concerns expressed seriously. In fact, our board took a close look at the issue, examining it from various points of view,” GASP wrote in a statement. “While every nonprofit that receives Colcom funding must do what's right for them, we decided in 2019 the right course of action for us was ending the relationship.”)

(After this article was published, Phipps spokesperson Joe Reed says that Phipps "neither requested nor received funding in calendar year 2019 or 2020 from Colcom." Reed did not specify why Phipps has cut off funding from Colcom.)

(After this article was published, Southwest Pennsylvania Environmental Health Project informed CP that while they did accept Colcom donations in 2019, they have ended their relationship with Colcom after learning of their anti-immigrant donations last year. They no longer accept funding from Colcom. SWPA Environmental Health Project director wrote that her organization "had acquired a very small amount of [Colcom's] environmental funding for programmatic efforts around the health risks associated with shale gas and oil development in southwestern Pennsylvania through the end of 2019. While our relationship with the Colcom Foundation was always professional and appropriate, we in no way endorse an anti-immigration stance.")