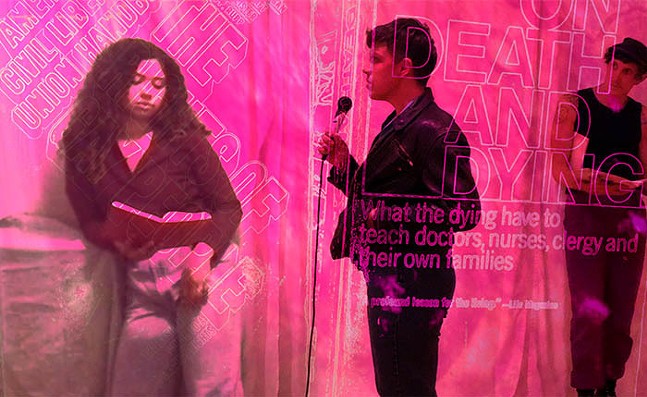 The performance, set to run at Chatham's Eddy Theater from Fri., Mar. 25 through Sat., Mar. 26, was created by director, performance-maker, and community organizer Lyam B. Gabel, who hails from New Orleans, La. but earned an MFA from Carnegie Mellon University. A press release says Gabel stitches together stories from the COVID-19 pandemic and the HIV/AIDS epidemic, "drawing from interviews with caretakers, activists, organizers, and long-term survivors."

Through this, Gabel seeks to explore the act of "queer-caretaking," all while honoring the spaces where these acts and queer history have happened, namely "sitting around the kitchen table, celebrating on the dance floor, and holding vigil in a hospital room."

Joseph Amodei, who provided additional research and media direction for the project, says certain technology was used to "facilitate embodied connections to queer histories." This includes portraying the "drippy portal of time with tools ranging from refurbished 1980s-era video cameras to real-time, highly-mediated projection design." Also created to complement the performance is Archive of Queer Care, a "browser-based Virtual Reality, video-game-like immersive experience" through which Amodei says "folks can spend time going deeper into the stories and places shared in the performance."

Photo: Courtesy of Kelly Strayhorn Theater/Lyam B. Gabel
the dancefloor, the hospital room, and the kitchen table
As a trans* artist, Gabel believes that the project used the past in a way that can help the community move forward in positive ways.

“As a trans* artist seeing myself in the archive has been deeply important to my own ongoing process of becoming. It is my intention to make the archive more accessible to other queer and trans* people of all ages so that they can see themselves reflected and find their own way towards that mirror,” states Gabel. "For queer and trans* people, the past can be a map. The ways that we have cared for each other can help us find the ways that we can continue to care for one another, care for our future, and care for our history.”

Striving towards accessibility extends past Gabel's art. Much like an increasing number of people in the community, they an asterisk with the term "trans" as a way to be more representative. As defined by the Oxford English Dictionary, trans was "originally used to include explicitly both transsexual and transgender," but the addition of an asterisk is used "(now usually) to indicate the inclusion of gender identities such as gender-fluid, agender, etc., alongside transsexual and transgender.“

the dancefloor, the hospital room, and the kitchen table received boosts from a number of outlets, including the National Performance Network and the Director Residency Program of The Drama League of New York. A version of the performance was workshopped at the CMU School of Drama in Nov. 2019 and received additional support from the Carnegie Mellon University GSA/Provost GuSH Grant.the dancefloor, the hospital room, and the kitchen table. Showtimes vary. Fri., Mar. 25-Sat., Mar. 26. Chatham University’s Eddy Theater. 1 Woodland Road, Shadyside. Pay What Moves You or $15-30. kelly-strayhorn.org