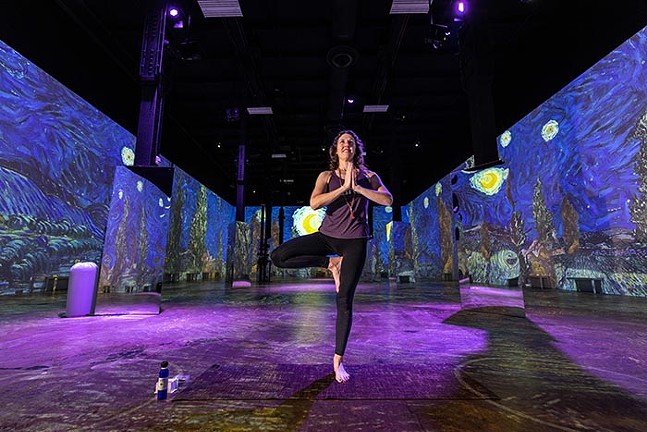 Van Gogh famously couldn’t sell his own paintings. Here, he is both artist and commodity, achieving remarkable heights of ancillary branding, albeit several steps removed from his brush. His life’s work is transformed into dancing pixels which are both the new medium and commercial product. Tickets range from $99.99 for the VIP option (includes a branded cushion) to off-peak hours for $39.99.

Early-rising types can opt for Gogh with Lifeway Kefir Immersive Yoga ($54.99), which combines the art presentation with a standard vinyasa flow. Yogis are instructed to just "feel good, take everything in," because the film can be enjoyed with full attention after class, and indeed, the artwork was never mentioned again. So patrons bend, twist, and stretch, while trying not to be distracted by the unavoidable screens. Even the floor is illuminated, which causes the mat to burst into skies, windmills, and Van Gogh’s troubled visage. Working out in the bath of colored light has its charms — and its distractions — but the yoga and the presentation co-exist rather than combine into a sum greater than the two parts.

Not content to merely present, the film breaks up the paintings, as a close-up of a wheat field dissolves into a streetscape, which then might fracture into the artist’s scribble. (For the old-fashioned patron, banners hang in the lobby depicting full paintings with some explanatory text.) Frequently, aspects within the paintings are animated — a train moves, blossoms quiver, flies crawl. As with a TV above the bar, the eye insistently travels to motion set in stillness. But to stare at the flickering candle set in Van Gogh’s hat reduces the viewer’s focus and can minimize the impact of the total work. Strict “totalists” be advised: The art form sold here is ever-shifting pastiche. Movement is demanded, as if acknowledging that today’s spectator can’t simply stand unentertained before a static image, even those as inherently dynamic and compelling as Van Gogh’s. 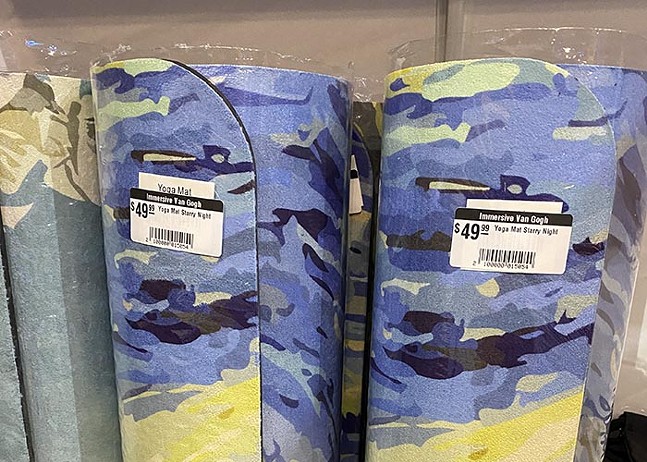 Despite the ballyhoo at the door — “entrancing, moving images that highlight brushstrokes, detail, and color” — this presentation tends to flatten the artwork, creating the sensation of being boxed in a TV, immersed in a music video, not an oil painting. Only a few brief seconds transcend this — most so when hundreds of purple irises multiply frantically, becoming a psychedelic panorama of intense Van Gogh-ish color. This abstraction is more visually interesting than the often stilted parade of the paintings and painting fragments.

But more workshopping toward this effect is needed throughout. Another attempt at breaking the format — in which assorted Van Gogh self-portraits reflect in the dark waters of “Starry Night Over the Rhône” — is cheesy, a hasty mash-up of greatest hits, the bandaged ear in a starry night.

Immersive Van Gogh is certainly provocative: Questions come to mind as rapidly as sunflowers pop on and off the screen. Is it art? Is it fair to Van Gogh? Is it illuminating? Can two million visitors worldwide be wrong? How much money is being made here? Would that one friend love a ticket as a holiday present? Is there a “right” way to appreciate fine art? What of all those dorm-room Van Gogh posters? Is a reproduction demonstrably less meaningful than standing before the actual painting? One is accessible to all, the other requires additional commitments of time, travel, and expense. Discuss.

Photo: Al Hoff
The real “Starry Night” at the Museum of Modern Art in New York City
Van Gogh’s “Starry Night” painting is relatively nearby, just a day’s drive away, hanging in the Museum of Modern Art in New York City, where a visitor may hope to glimpse it through a scrum of other visitors taking selfies. For many, the pleasure of art is inextricably tied to the modern experiential enhanced by technology — the proof of selfie; the added music (“I regret nothing …”); the rising steam in the immersive “Potato Eaters” that makes it seem more “real”; the inevitable exit-through-the-gift-shop where additional talismans — mass-produced in China utilizing other high-tech wizardry — of having Done Art can be acquired for inflated sums. (Indeed, Immersive offers a robust selection of Van Gogh-ish geegaws, from bucket hats to flasks, but the High Temple of MOMA is no different — need a “Starry Night” umbrella?)

Immersive Van Gogh is, as advertised, an entertainment experience, a pre-programmed spectacle with a patina of the intellectual weight that we believe the high art and serious knowledge enshrined in museums conveys. It is Laserium with classical music, or an IMAX plunge to the ocean floor, or a long-ago traveling sideshow that promised “wonders of exotic lands.” Such pursuits are wholly artificial, but you knew that going in, right? Each visitor will have their own take — be it awe, boredom, delight or revulsion — and in the end, only one question matters: Is standing in an illuminated box of animated Van Gogh paintings worth $60 to you?Van Gogh Exhibit: The Immersive Experience. Continues through February 2022. Lighthouse Artspace. 720 E. Lacock St., North Side. $29.99-99.99. vangoghpittsburgh.com