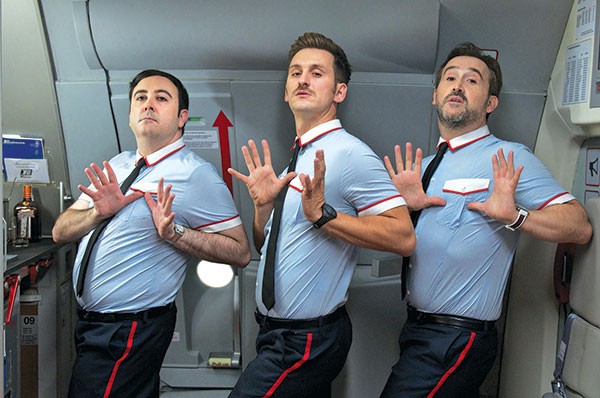 The singing stewards of Almodovar Airlines

In Spanish, with subtitles.

Pedro Almodovar's I'm So Excited! is a throwback to the livelier stuff he did in the late-early part of his career, after he became known for darker films like Matador and Law of Desire. Call this Passengers on the Verge of a Nervous Breakdown, where only sex, alcohol and tranquilizers can bring a sense of false (if spirited) serenity.

The action happens aboard a Spanish airliner bound for Mexico City. Early in the flight, the pilots realize they'll have to make an emergency landing — if they can find an airport to accommodate them. Word spreads thanks to a veracious gay steward — one of a trio of such sprites who camp it up — and soon the passengers get talkative with one another.

"We're flying around aimlessly, and we don't know where or when we're going to land," a passenger says. It's one of numerous metaphors — the plane finally lands at Aeropuerto de la Mancha, the businessman's boondoggle — for the discombobulated-cum-dishonest lives of the people on this flight to gain integrity and self-awareness. But don't worry: Nobody dies, they all learn valuable things about themselves and the opening scene has a cameo by Antonio Banderas and Penelope Cruz, whose careers Almodovar launched.

The film takes its English title from a flamboyant dance performed by the three gay blades as they lip-synch to the Pointer Sisters tune. "What makes you think all of this is funny?" an especially uptight hetero (is that redundant?) passenger asks after the routine. One of them answers: "It's always worked for us." So if you ever feel down, just ask a gay friend to entertain you.

This is all sporadically amusing, but also fairly transparent, and more than a little contrived. Then again, what Almodovar film isn't? Like most of his work, I'm So Excited! swings from tame titillation to quasi-tragedy, pausing quickly to make a point every half-dozen scenes or so. But there's something a little adolescent about it, and you'd think Almodovar would have gotten over such stuff long, long ago.